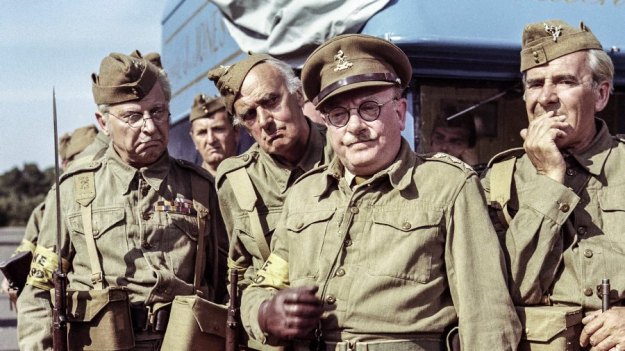 2020 has been a miserable year for us all – please keep safe! I really need some ‘Dad’s Army’ to cheer me up! Those famous characters of the show you remember like Captain Mainwaring, Wilson and Jones and the famous catchphrases like “Don’t Panic!”; “We’re Doomed!” and “You Stupid Boy!”

I’ve had a chance to watch the Christmas Specials of ‘Dad’s Army’ lately in December. My parents and I have also seen the new Channel 5 documentary called ‘We Love Dad’s Army’. This is a lovely documentary featuring anecdotes and comments from celebrities who love the comedy TV show. 😀

The documentary was about 90 minutes in total with commercial breaks in-between because it was on Channel 5. It was narrated by Stephen Mangan (I had no idea) who played Dirk Gently in the BBC4 ‘Dirk Gently’ series as well as voiced Postman Pat in ‘Postman Pat: The Movie’. He’s a good narrator!

The documentary also had celebrities like Christopher Biggins, Jonathan Ross, Eamonn Holmes, and Al Murray being interviewed on what they liked about the show ‘Dad’s Army’, sharing their favourite characters, catchphrases and episodes. It was lovely to hear them talk about the ‘Dad’s Army’ show!

Clearly the interviews were done in the celebrities’ homes since this documentary must’ve been made during the Covid-19 pandemic. It’s amazing how the documentary was put together with the interviewees being at home. It shows how dedicated people are making new documentaries in 2020.

It was amazing to see Caroline Dowdeswell being interviewed in the documentary. She played Janet King, the female worker at Mainwaring’s bank in Series 1 of ‘Dad’s Army’. I wondered why she didn’t appear in more episodes of the show and it was intriguing to hear the behind-the-scenes reasons. 😐

Don’t know why the 1971 film didn’t get mentioned, but at least we got to see footage of the ‘Dad’s Army’ stage from 1975. It was nice Stephen Lowe, son of Arthur Lowe, Robin Le Mesurier, son of John Le Mesurier and Jonathan Pertwee, son of Bill Pertwee, being interviewed in the documentary.

There were also archive interviews of director/producer/writer David Croft, writer Jimmy Perry, and actors John Laurie, Arthur Lowe, Bill Pertwee, Clive Dunn, John Le Mesurier and Arnold Ridley being interviewed. Some of the archive interviews I have not seen before anywhere else on a DVD release.

It was lovely to see how the ‘We Love Dad’s Army’ documentary celebrated the show in all its glory, including how it’s continued to have a long-lasting legacy even after it finished in 1977. I still love ‘Dad’s Army’ to this day and I’m so happy to keep on revisiting it whether on DVD or on BBC iPlayer.

In troubled times as we live in now; you can always rely upon ‘Dad’s Army’ to give you a smile whether you watch an episode or Christmas Special at this time of year. I’m very happy to have seen ‘We Love Dad’s Army’ on Channel 5. It’s nice to watch it before Christmas time to keep me cheerful.