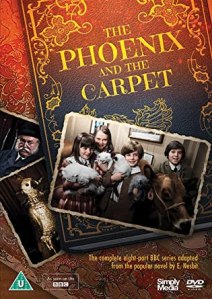 The 1976 BBC adaptation of ‘The Phoenix and the Carpet’ is interesting. It’s based on the book by E. Nesbit and is considered the second of the Psammead trilogy. Yet, the Psammead doesn’t make an appearance in the tale, with there being no previous adaptation of ‘Five Children and It’ before it. 😐

It’s fascinating how the BBC in 1976 decided to do an adaptation of ‘The Phoenix and the Carpet’ without doing an adaptation of ‘Five Children and It’ first. Then again, Sarah Sutton did ‘Alice Through the Looking Glass’ only and didn’t do ‘Alice in Wonderland’ at all, which is rather unusual. 😐

The story of ‘The Phoenix and the Carpet’ goes like this. The ‘Five Children and It’ family buy an old carpet from a junkshop in Edwardian London. When they unroll the carpet, they find a large shiny egg. After accidentally knocking the egg into the fire, a charming talking phoenix emerges from it. 😀

The Phoenix has the power to grant the children’s wishes. But they have to stand on the carpet in order to be taken somewhere on fantastic adventures. The children Cyril, Anthea, Robert and Jane go on such exciting adventures to distant lands and faraway places. How long will this last however?

The actors playing the four children are as follows. There’s Jane Forster as Jane, Max Harris as Robert, Tamzin Neville as Anthea and…Gary Russell as Cyril! Yes! That Gary Russell! The one who went on to become a Big Finish ‘Doctor Who’ writer and director and ‘Doctor Who Magazine’ editor!

It’s amazing to know that Gary Russell was a child actor before becoming heavily involved in ‘Doctor Who’ in terms of writing, directing and magazine editing. As well as appearing ‘The Phoenix and the Carpet’, Gary Russell also played Dick in the 1978-79 ‘Famous Five’ TV series. It’s quite amazing that!

The Phoenix is a puppet performed by Richard Warner and Joe Barton. I liked the Phoenix character since he seemed rather charming in his way when interacting with the children. He’s less grumpier than the Psammead, I believe. The puppet is dated now, but it must have been state-of-the-art then.

The cast also includes Daphne Neville as the Mother and Edward Brooks as the Father. The Lamb, the baby brother of the four children, is played by V.M. Hartman in the serial. There’s also Deddie Davies as Mrs. Wigson and there’s Nigel Lambert as the Reverend Septimus Blenkinsop in the serial!

There’s Trisha Mortimer as Eliza, Susan Field as the Cook, Bernard Holley (who was in the ‘Doctor Who’ stories ‘The Tomb of the Cybermen’ and ‘The Claws of Axos’) as the Burglar. Diana King from the ‘Fawlty Towers’ episode ‘The Wedding Party’ appears in one of the episodes as Selina, an aunt of Septimus Blenkinsop. John Rolfe from the ‘Who’ story ‘The Green Death’ plays a policeman too. 🙂

I enjoyed some of the adventures the four children have when going on a carpet, including when they go to a tropical island and their cook ends up being a queen of a native tribe. It was fun when the children had trouble with a lot of Persian cats and a cow ending up in their nursery for two episodes.

The 1976 BBC adaptation of ‘The Phoenix and the Carpet’ was very enjoyable. As an eight-part drama, it does have some nice and compelling character moments, especially between the four children who are played well by the actors. The Phoenix puppet for its time is decent throughout. 😀