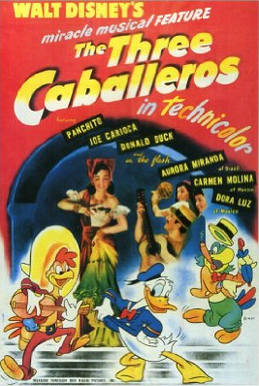 Last Friday, I saw a childhood classic Disney film I hadn’t seen in a long time. I watched it on VHS in the 1990s and revisited ‘The Three Calablleros’, a 1944 film, on Disney+. It stars Donald Duck with two bird friends – the cigar-smoking parrot José Carioca and the pistol-packing rooster Panchito Pistoles.

The first segment contains a number of short cartoons like ‘The Cold-Blooded Penguin’, narrated by Sterling Holloway who was the original voice of Winnie the Pooh. 😀 There’s also ‘The Flying Gauchito’, narrated by Fred Shields which tells the story of a little boy and a winged donkey, Burrito.

We then move onto the ‘Baía’ section (or is it Bahía) where Donald is reunited with his friend José Carioca in a pop-up book. Apparently, Donald and José encountered each other before in ‘Saludos Amigos’. I’ve yet to see that Disney film. I must put it on my Disney+ watchlist next time I’m there. 😀

José takes Donald on a trip through the pop-up book to visit Baía where they meet some of the locals (in live-action) who dance a samba. Apparently, Aurora Miranda, a well-known Latin American singer at the time, appears in the film and Donald pines for her when he and José are visiting Baía. 😀

After that, Donald and José are joined by Panchito Pistoles from Mexico where they sing the titular song ‘The Three Caballeros’, which I remember vividly from watching one of the Disney ‘Sing-a-Along’ VHSs. We have a Christmas story given to Donald and Panchito which also involves a piñata. 🙂

I like how the ‘Las Posadas’ Christmas story is about a group of Mexican children re-enacting the Christmas story of Mary and Joseph searching for a room at the inn. Donald receives a lot of presents when he gets a chance to break his own piñata, though Donald has a hard time breaking it.

Donald and José are then given a tour of Mexico City by Panchito where they fly on a flying sarape or a magic carpet. A number of Mexican dances and songs are learned here when they go to places like Pátzcuaro, Veracruz and Acapulco. Donald also pines for many ladies when touring about Mexico. 😀

The film’s final act has Donald falling in love with singer Dora Luz who sings ‘You Belong to My Heart’. There’s also ‘Donald’s Surreal Reverie’ where Donald dances with Carmen Molina and they both dance and sing the song ‘La Zandunga’. There’s plenty of psychedelic imagery in the final act. 😀

There are lots of enjoyable moments in the film involving cartoon antics between Donald, José and Panchito. There are also plenty of enjoyable musical numbers. As well as ‘The Three Caballeros’ and ‘You Belong to my Heart’, there’s ‘Baía’, ‘Os Quindins de Yayá’, the ‘Jarabe Pateño’ and plenty more.

I’m amazed to find that there’s a TV series based on the film called ‘Legend of the Three Caballeros’ and it was made recently in 2018. I greatly enjoyed revisiting ‘The Three Caballeros’ on Disney+. There’s certain nostalgia to the film which I enjoyed and it did bring back happy memories as a kid. 🙂