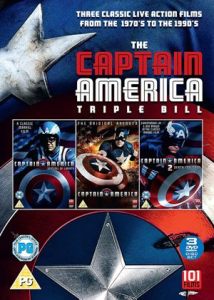 ‘The Captain America Triple Bill’ DVD box set contains two TV films from the 1970s starring Reb Brown and a 1990 film starring Matt Salinger meant for cinema it got but released on VHS instead. These are very different versions of Captain America compared to what I’ve witnessed in the ‘MCU’.

Chris Evans will always be Captain America for me, but it was intriguing to see how actors like Matt Salinger and Reb Brown played the character. It was also fascinating how their origin stories got handled and how their action-packed adventures were portrayed whether in the 1970s or the 1990s.

The first half of the film follows more or less what went on in the first ‘Captain America’ film from the ‘MCU’, except there are aspects that don’t make a lot of sense. For example, Steve Rogers isn’t given enough training to be Captain America, making me wonder why no-one gave him the training.

The second half of the film has Captain America frozen in time before he wakes up to find himself in the 1990s. It’s like the first two ‘MCU Captain America’ films scrunched together and rather clumsily, I might add. Also, the Red Skull who appears in the film doesn’t appear enough in his ‘red skull’ form.

Very often, the Red Skull seems to have a fleshy face and he’s also Italian, not German as you would expect. I have an impression Matt Salinger’s Captain America tends to be a jerk in the film. This is especially once he pretends to be car-sick; gets out; and soon steals cars from certain people here. 😐

The film is directed by Albert Pyun. Matt Salinger as Steve Rogers/Captain America is joined by Ronny Cox as President ‘Tom’ Kimball, Scott Paulin as Tadizo de Santis/Red Skull, Ned Beatty (Yes, he was Otis in the ‘Superman’ films) as Sam Kolawetz, Darren McGavin as General Fleming, Michael Nouri as Lt. Col. Louis, Melinda Dillon as Mrs. Rogers, and Kim Gillingham as Bernice Stewart and Sharon. And who can forget that Nazi spy that did the most over-the-top way to kill somebody in the film here? 🙂

I know that’s parody video I used, but it is a ridiculously funny moment. 😀

I then checked out the next two ‘Captain America’ films from the 1970s, starring Reb Brown. I enjoyed these more than the 1990 film. They’re certainly very different from the ‘MCU’ films and they both take place in 1979. But they were very entertaining, filled with good drama and suspense.

It was also surreal to see Captain America riding a turbo-powered motorcycle, which isn’t something I see Chris Evans’ Captain America doing very often. 😀 Reb Brown is good as Captain America. He’s sincere in his performances for both films and I found the plotlines in both TV films quite compelling.

They may not be the most action-packed of films compared to what we’ve seen nowadays, but they are quaint films. It’s also amusing to see Reb Brown’s Captain America have his own van where he charges out from on his turbo-powered motorcycle. The shield is placed atop of the motorcycle too.

The first ‘Captain America’ film directed by Rod Holcomb has Reb Brown as Steve Rogers/Captain America joined by Len Birman as Dr. Simon Mills, Heather Menzies as Dr. Wendy Day, Robin Mattson as Tina Hayden and Joseph Ruskin as Rudy Sandrini. It was fascinating how Steve Rogers got his super soldier serum in the time of 1979 as opposed to the time of the 1940s in WWII.

The second ‘Captain America’ film directed by Ivan Nagy has Reb Brown as Steve Rogers/Captain America joined again by Len Birman as Dr. Simon Mills, but Dr. Wendy Day is played by Connie Sellecca this time. There’s also Katherine Justice as Helen Moore. Christopher Lee (who was in ‘The Lord of the Rings’ films) guest stars as the villainous General Miguel. That’s amazing! 😀