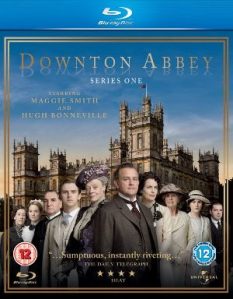 With the upcoming ‘Downton Abbey 2’ movie due to be released in December 2021, it’s a good time to check out the ‘Downton Abbey’ TV series. I’ve decided to review the TV series season by season and do quick reviews on its Christmas Specials. I look forward to checking out more of the TV series.

‘Downton Abbey’ is a period drama TV series written and created by Julian Fellowes. I first came across Julian Fellowes as an actor. He played Kilwillie in ‘Monarch of the Glen’. It’s incredible that he’s done a lot of work in terms of acting, directing and writing over the years for film and television.

I believe ‘Downton Abbey’ must be his crowning achievement. The series takes place in England, starting in the early 1910s from the sinking of the Titanic in 1912 leading up to the declaration of the First World War in 1914. ‘Downton Abbey’ is a story of a complicated community at a manor house. 🙂

It looks into the Crawley family who live in Downton Abbey as well as the servants who live and work there. Period costume dramas like this have been done before in shows like ‘Upstairs, Downstairs’ and ‘You Rang M’Lord’. This prestige drama is the latest and probably the best and most well-known.

Series 1 of ‘Downton Abbey’, which comprises of seven episodes altogether, looks into the ties between blood relations in family, which is an important aspect of the series. It looks into issues relating to class and privilege in a variety of aspects, including how homosexuality was treated then.

As well as the period setting and the costume drama being stunning, the cast are also superb. The series is heralded by Hugh Bonneville who plays Robert Crawley, the Earl of Grantham at Downton Abbey. There’s also Maggie Smith who’s playing Violet Crawley, the Dowager Countess of Grantham.

The series introduces a potential heir to Downton Abbey who comes from Manchester. It’s Dan Stevens as Matthew Crawley who is joined by Penelope Wilton as Isobel Crawley. I like how the romance elements between Matthew and Lady Mary get developed as the series progresses here. 🙂

Mind you, it is quite disconcerting that the series doesn’t take place within one year as it takes place over a progression of years. Like I said, Series 1 takes place from 1912 to 1914. It’s not like ‘Call the Midwife’ as each season of the show took place annually throughout the years from 1950s to 1960s.

I liked the romance that was blossoming between John Bates and Anna Smith in the series. I found Thomas Barrow and Sarah O’Brien’s antagonism towards John Bates very cruel and unjustified. You could say they’re almost the villains of the series when they devise plots to ruin Bates’ reputation. 😐

It’s amazing how many actors I recognised from being in ‘Doctor Who’ and other film/TV productions appearing in ‘Downton Abbey’. Phyllis Logan and Siobhan Finneran were in ‘Doctor Who’ recently with Jodie Whittaker. Dan Stevens played the Beast in 2017’s ‘Beauty and the Beast’.

It is a challenge to get into the series and get to know the characters. But having watched the first few episodes a couple of times and managing to complete Series 1 recently, I’d say ‘Downton Abbey’ is a worthwhile drama series to check out on DVD/Blu-ray. Looking forward to checking out Series 2 next! 🙂