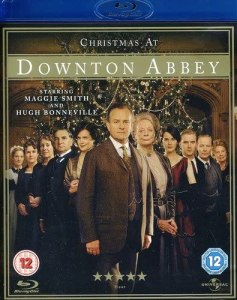 It’s time to talk about the first Christmas Special of ‘Downton Abbey’, which was transmitted on ITV 1 on the 25th of December 2011 between Series 2 and 3. I enjoyed this Christmas Special and whilst there’s an ongoing storyline I’m concerned about, I’m glad the special does end on a happier note. 🙂

The special takes place from December 1919 to January 1920! In fact, I believe we start off on Christmas Day with the staff being given presents by the Crawley family. It’s a nice touch and I like it when some of the family members show concern for Anna who’s worried about her hubby in prison.

Speaking of which, in the New Year, Bates is put on trial for the murder of his wife. Things don’t go well for him and he’s convicted by the judge and jury. Fortunately, thanks to Lord Grantham and Matthew’s efforts, Bates’ death sentence is commuted to life imprisonment which is a huge relief. 🙂

Bates encourages his wife Anna to stay on at Downton to live a full life. Whilst I believe Bates is going to be in prison for most of Series 3, Thomas might become a temporary new valet for a while. This is after impressing Lord Grantham for rescuing his dog who he himself caused him to be lost initially.

The film’s cast also includes Lady Edith’s former suitor Robert Bathurst as Sir Anthony Strallen who returns and is now a war invalid. He tells her that he’s too old for her when they reunite. Mind you, looking ahead and seeing he’s in the first three episodes of Series 3, it’s not the last we’ll see of him.

Timothy Carlton (who is Wanda Ventham’s husband and Benedict Cumberbatch’s father) guest stars as the judge at Bates’ trial in the special. There’s also Paul Copley (who was in ‘Doctor Who’s ‘Spare Parts’) back as Mr. Mason, William Mason’s father and he reunites with Daisy, his daughter-in-law. 🙂

There’s a subplot going on involving the staff entertaining themselves with an Ouija board and trying to contact the spirits (going into ‘Steptoe & Son’ territory then 😀 ). There’s also the revelation that Lady Sybil, who married Tom Branson and is currently living in Ireland, happens to be pregnant here.

Iain Glen returns as Sir Richard Carlisle in the special, but Lady Mary jilts him despite his threat to publish her dark secret regarding the late Kemal Pamuk in Series 1. Thankfully Matthew forgives Lady Mary for what happened back then and the special ends with the two engaged to be married. 🙂

‘Christmas at Downton Abbey’ is a good first Christmas Special in the ‘Downton Abbey’ series. I’m curious about how the Bates storyline will go and whether he’ll be found innocent whilst spending time in prison. But I’m happy for Lady Mary and Matthew and hopefully they’ll have a good future. 🙂