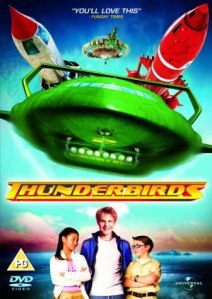 At ‘Bradley’s Basement’ headquarters, Tim types away at the home computer. He then spots a video on YouTube. It’s the first teaser trailer for ‘Thunderbirds’ (2004) from iRMG – Thunderbird Are Go.

“Wow! I remember that being a really good teaser trailer. I thought at first it was a ‘Hulk’ trailer on the ‘Hulk’ 2003 DVD. But it turned out to be something even better!”

“Yep! That teaser trailer still holds up even to this day! Hmm!” (Pause) “It’s a pity the movie’s bad.”

Tim then spots the ‘Thunderbirds’ 2004 film on Google Play.

(awkwardly) “No, I don’t really know if I want to review that film. I mean, does it need to be reviewed? It’s bad! There can’t be anything good to say about it!” (sighs) “Let’s see if there’s something else ‘Thunderbirds’-related I might check out.”

Tim googles away for anything ‘Thunderbirds’-related. He finds something.

“The ‘Thunderbirds Are Go!’ 2015 series? Okay, I suppose I could check that out. It’s not on Britbox, but at least it’s on ITV Hub. And it’s for free. Maybe, a couple of episodes of the show won’t hurt…”

WilliamsFan92: “I’m shocked that you’re not reviewing the ‘Thunderbirds’ 2004 film! You’ve reviewed everything else that’s ‘Thunderbirds’-related lately, including the 1960s TV show, the two 1960s films, the anniversary episodes on Britbox and the ‘Terror From The Stars’ novel/audiobook. Why not the 2004 film?”

WilliamsFan92: “Just like you don’t have time to check out ‘At Home with the Braithwaites’ with Peter Davison on Britbox.”

(sighs) “Look, I’m quite busy at the moment. I’m going to have to get back to you later. Now there must be something else that might be of interest that’s ‘Thunderbirds’-related. Anything from Big Finish lately?”

“Okay, it’s not ‘Thunderbirds’, but it’s close. And I am watching the ‘Stingray’ series on Britbox, so this should be worth checking out.”

(startled) “Wolfie, where did you come from?!”

Wolfie: “Someone blitzed the lock on your door. I am shocked…shocked to discover that there is reviewing going on in here. The 2004 ‘Thunderbirds’ film, eh? Brave man.“

“I’m not reviewing that movie, Wolfie! Have you got anything else better to do than bother me with a despised film like 2004’s ‘Thunderbirds’? Any Divergent Wordsmiths anthology you’re working on?”

Wolfie: “I refuse to answer on the grounds it may promote me. By the way, I’m currently waiting for your submissions to ‘The Paul Spragg ReCollections, Volume 2′ anthology.“

(groans) “There must be something that will divert me away from not spending time checking out and reviewing the ‘Thunderbirds’ 2004 film!”

Wolfie: “Have you seen the Moon outside?”

Timelord007: “You must review the 2004 ‘Thunderbirds’ film! You cannot escape it! It is your destiny!”

Timelord007: “You must let people know of the horrors this movie produced back when it was shown on cinema screens in 2004! And what you would have done to make it better into the ‘Thunderbirds’ movie it could have been with your ‘Bradley’s Basement’ magic!”

(sighs; to audience) “Alright then. I guess I’m reviewing the 2004 ‘Thunderbirds’ film. Please feel free to check out, read and comment on my review for ‘Thunderbirds’ (2004) by clicking on the link for it.”

WilliamsFan92: “That’s the spirit, Tim! You managed to review ‘Iron Man 3’ and ‘Batman & Robin’, so this shouldn’t be any different.”

Timelord007: (rants) “The filmmakers gave the disrespectful two-finger-salute cheek to Gerry Anderson when he offered his creative input! Whoa! The genius who is Gerry Anderson snubbed by imbeciles who knew nothing about the iconic show. And what with the logo that’s not a ‘Thunderbirds’ logo, it looks cheap and tacky. Seriously, don’t get me started! I love the original TV show so much, [but the film is an insult to the source material….”]

WilliamsFan92: (to Wolfie) “I expected something like this to happen.”

Wolfie: “He does get so passionate. I keep some teabags in my jacket for just such occasions. I’ll brew the kettle….”

Wolfie begins to brew the kettle whilst Timelord007 rants away.

WilliamsFan92: “I thought he was talking about me.”

Timelord007 soon HULKS and SMASHS it out.