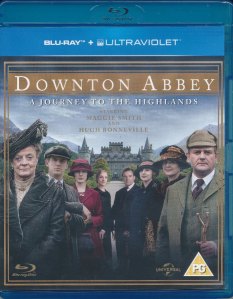 I imagine a lot of people came away feeling downhearted once the Christmas Special ended, especially as one of the main characters that audiences grew to love is killed off here. It’s a shame as for the majority of the special, things were quite light-hearted and entertaining for our characters. 😦

In the special, the Crawley Family take a trip to Duneagle Castle in Scotland to visit the great niece of Maggie Smith as Violet Crawley, the Dowager Countess of Grantham. Not everyone that we know in the series gets to visit Scotland, since some of the characters stay behind in Downton Abbey itself. 😦

There are two storylines going on throughout ‘A Journey to the Highlands’. One in Scotland itself and one back in Downton Abbey! I would have expected the special to focus entirely on the Scotland side of things and not having to go back at Downton Abbey. Then again, it’s nice to have two storylines. 🙂

As well as the Dowager Countess of Grantham, the other characters that go to Scotland are Hugh Bonneville as Robert Crawley, Elizabeth McGovern as Cora Crawley, Michelle Dockery as Lady Mary Crawley, Dan Stevens as Matthew Crawley, Laura Carmichael as Lady Edith, Brendan Coyle as Mr. Bates, Joanne Froggatt as Anna Bates, Siobhan Finneran as Mrs. O’Brien and Kevin Doyle as Mr. Molesley.

There’s a new character in the series – MyAnna Buring as Edna Braithwaite. She’s a new maid at Downton Abbey, but she doesn’t last long when she sets her sights on Tom Branson who’s currently mourning the loss of his wife Lady Sybil. I think Edna was rather forward towards Tom, whilst he was still grieving for Lady Sybil here. Despite her leaving, Edna is set to return in four episodes of Series 4.

Peter Egan appears in the special as Hugh ‘Shrimpie’ MacClare, Marquess of Flintshire. I’m actually disappointed that Peter Egan didn’t get to reunite with Penelope Wilton in this special, since they worked together in ‘Ever Decreasing Circles’. 😀 There’s also Phoebe Nicholls as Susan MacClare, the Marchioness of Flintshire. Apparently, Shrimpie and Susan don’t get on well with each other here. 😦

There’s also Lily James as Lady Rose, Shrimpie and Susan’s daughter, who appeared at the end of Series 3. As I gather, Lady Rose is a typical girl of the 1920s period. It will be interesting to see how she develops as a character, especially when she goes to live at Downton Abbey with the Crawleys. And of course, I’ve seen Lily James appear in 2015’s ‘Cinderella’ and the second ‘Mamma Mia’ film. 🙂

The guest cast also includes Ron Donachie (who was in an episode of ‘Monarch of the Glen’ and the ‘Doctor Who’ episode ‘Tooth and Claw’) as Mr. McCree, and Simon Lahbib (who played Isobel in Series 6 of ‘Monarch of the Glen’) as Wilkins. There’s also Charles Edwards as Michael Gregson, who’s romantically interested in Lady Edith. Could this romance last a long time for Lady Edith here?

It was bittersweet when the special ended, not just with the birth of Lady Mary’s new baby boy, but also with the death of Matthew Crawley. Yeah! Matthew Crawley gets killed off by the end of the special. As said before, I’m sure a lot of ‘Downton Abbey’ viewers were very heartbroken by the end.

‘A Journey to the Highlands’ is a good ‘Downton Abbey’ special, sadly let down by the bittersweet ending of Lady Mary’s new-born child and Matthew’s death. I’m wondering what will happen next in Series 4 and how Lady Mary will mourn the loss of her husband. It’s a sad way for Matthew to leave.