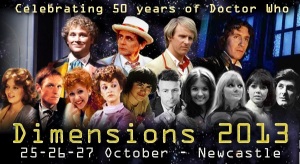 It’s time to share some more ‘convention memories’ today as I talk about the last ‘Doctor Who’ convention I attended in 2013 – the 50th anniversary year of the TV show. In October 2013, I attended ‘Dimensions 2013’, held at the Copthorne Hotel in Newcastle, run by 10th Planet Events. 🙂

This was the second 10th Planet Event I attended in that year (the first one being ‘Project Motor Mouth 2’ back in August 2013). This was a 3-day convention event from the 25th to the 27th of October 2013. I attended the convention on all 3 days as I purchased a Gold ticket to access all areas.

My parents joined me for the ride too. 🙂 I was excited about this convention weekend, hoping to see many ‘Doctor Who’ stars in attendance like Sarah Sutton, Peter Davison, Janet Fielding, Matthew Waterhouse, Colin Baker, Sylvester McCoy, Paul McGann, Wendy Padbury, Anneke Wills, and more.

I wouldn’t say ‘Dimensions 2013’ was as good as ‘Regenerations 2013’, but I certainly got a lot out from attending the convention and it was all in the spirit of celebrating 50 years of a TV show I had grown to love. Let me share with you what each of the three days of ‘Dimensions 2013’ were like. 😀

Before we start, just to point something out – ‘The Light At The End’, Big Finish’s anniversary story to celebrate 50 years of ‘Doctor Who’ was released a day before my parents and I set off for Newcastle. Some of the ‘Doctor Who’ stars at the weekend had photos of them taken with copies of the story. 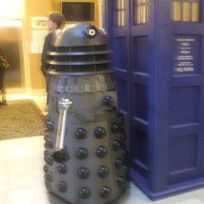 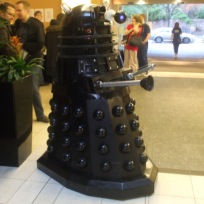 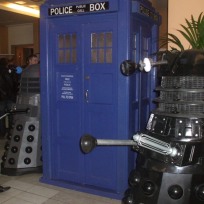 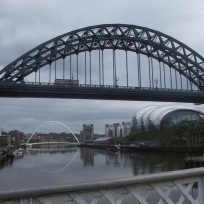 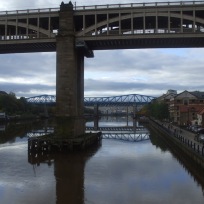 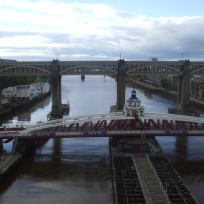 On Friday, the registration opened at 3:30pm. Later that evening, there was a Gold ticket drinks reception at 7pm, which I attended. I chatted with ‘Doctor Who’ stars like Sarah Sutton (Nyssa), who I had a great time chatting to at the drinks reception. 🙂 Janet Fielding (Tegan) was also there as well as Paul McGann (the Eighth Doctor) and Deborah Watling (Victoria). I even chatted to Lauren Wilson (Lucy Cartwright from ‘Human Blood’/’The Family of Blood’) there.

I recall chatting to Sarah about settling into Newcastle that weekend and I also shared with that I was learning to drive back then. Sarah teased me saying that she’d have to get out of the way and not be run over by me. I also told Sarah a ‘Parking Fine’ joke which made her laugh at the reception.

There was a quiz in the main hall afterwards, but I don’t recall attending that very much. I probably went to my hotel room to get myself ready for tomorrow. Earlier in the day, my parents and I spent most of the time looking around Newcastle. We even took photos of Newcastle during the day. 😀 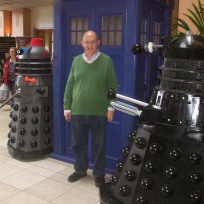 Tim Bradley’s Dad with Daleks and the TARDIS at ‘Dimensions 2013’, Newcastle, October 2013 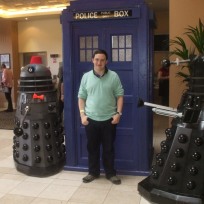 Tim Bradley with Daleks and the TARDIS at ‘Dimensions 2013’, Newcastle, October 2013 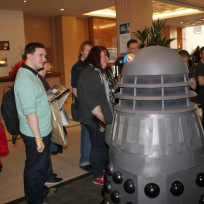 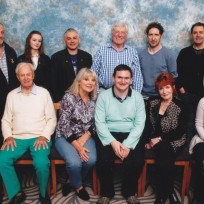 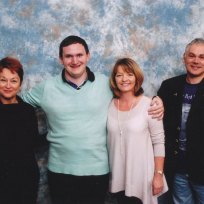 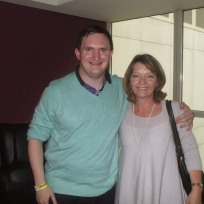 The next day at breakfast, I got to say “Hello” to Sarah on my way out of the dining room whilst she was on her way in. It was a very cheery “Hello” exchange. 😀 I also recall saying “Hello” to Matthew Waterhouse (Adric) once in a lift when I was on my way up back to my hotel room, which was nice. 🙂

For the main convention day, my parents and I attended the stage talk featuring William Russell (Ian), Anneke Wills (Polly) and Peter Purves (Steven), which we enjoyed. There were also autograph sessions with Sarah Sutton, Janet Fielding and Matthew Waterhouse that I enjoyed that Saturday. 😀

Sadly, Peter Davison (the Fifth Doctor) wasn’t able to attend ‘Dimensions 2013’ that weekend. 😦 We were told he was busy on a filming project. Me thinks he was finishing making ‘The Five(ish) Doctors Reboot’ that month. 😀 A pity I didn’t get to see him then. Thankfully I would meet him years later. 🙂

Sarah, Janet and Matthew signed my DVD cover of ‘Earthshock’ at the event. It was nice to hear their thoughts about ‘Earthshock’, especially as I shared with them it was my first classic ‘Doctor Who’ experience with them in it. Sarah also signed my CD cover of the audio ‘The Land of the Dead’.

I also received my ‘WHO Girls Calendar’ for 2014 from Fantom Films before ‘Dimensions 2013’ happened. I had Sarah’s calendar image for September signed by her that weekend. I recall Sarah teasing me quite a bit that weekend. A clear indication that we were getting on well at conventions!

I also got to have an autograph session with Paul McGann, who I met for the first time at a ‘Doctor Who’ convention. I managed to get my CD cover of ‘The Company of Friends’ and ‘Shada’ signed by Paul at the event. I enjoyed sharing how much I enjoyed 2003’s ‘Shada’ and he enjoyed making it. 😀

I also met Lisa Bowerman (Bernice Summerfield) that day. She signed my CD covers of ‘The Company of Friends’ and ‘Bernice Summerfield and the Criminal Code’. I’m sure I chatted to Lisa in the lift too. Big Finish had their own stall set up throughout the weekend, which I did visit a number of times. 😀

After lunch, there were a number of photo shoots including a Saturday group shot of all the guests who attended that day. There was also a photo shoot with Sarah Sutton, Janet Fielding and Matthew Waterhouse. I’m really pleased I got to have a photo with Sarah, Janet and Matthew during that day.

There were also some autograph sessions with Peter Purves, Anneke Wills and David Troughton. I wasn’t able to get an autograph from William Russell as the autograph queue was for him quite long. Thankfully, I was able to get my DVD cover of ‘The Chase’ signed by Peter Purves on that Saturday. 🙂

I also had my CD cover of the ‘Ghosts of India’ audiobook signed by David Troughton and my ‘House of Cards’ CD cover signed by Anneke Wills. I recall having a nice chat with David that day, even though it was quite brief. He shared what it was like to voice the Tenth Doctor in ‘Ghosts of India’. 🙂

I also got to have a photo with Sarah using my digital camera that day. The highlight of the day was attending a panel talk with Sarah, Janet and Matthew. I got to interact with Sarah during that panel talk and I was very pleased when she said she would like to work with David Haig as an actor again. 🙂

That evening, I attended a celebrity dinner at 7pm which I enjoyed. I believe I had cream of leek and potato soup, breast of chicken and chocolate fudge cake that evening. Hmm, yummy! 😀 There was also a ‘Doctor Who’ screening of ‘Besieged’ (which I saw at ‘Regenerations 2013’), an auction and a cabaret. I sadly did not attend those. 😦 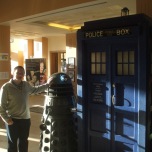 Tim Bradley with a Dalek and the TARDIS at ‘Dimensions 2013’, Newcastle, October 2013 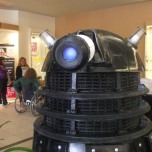 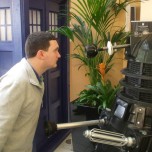 Tim Bradley faces a Dalek and the TARDIS at ‘Dimensions 2013’, Newcastle, October 2013 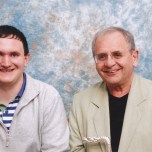 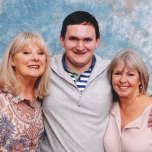 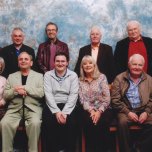 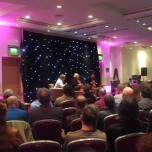 A stage talk with Colin Baker and Gareth Jenkins at ‘Dimensions 2013’, Newcastle, October 2013 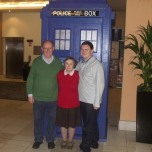 Tim Bradley with his Mum and Dad outside the TARDIS at ‘Dimensions 2013’, Newcastle, October 2013

Sunday wasn’t as good as Saturday in my humble opinion, but I still enjoyed the day. The first thing I enjoyed was a coffee club session with Wendy Padbury (Zoe). I, with other fans, enjoyed asking questions to Wendy about her career in ‘Doctor Who’ and outside of it. Wendy was lovely to chat to. 😀

I later attended the stage talk that featured Wendy Padbury and Anneke Wills together, which I enjoyed. There was also a panel talk featuring Debbie Watling afterwards. There were quite a number of Daleks attending that weekend. I had photos with them and I also took photos of Daleks.

I also enjoyed a stage talk featuring Sylvester McCoy and Philip Olivier that day. I got to ask a question to Sylvester and Philip about what it was like to work with Sophie Aldred, which they gave positive answers. After lunch, there was a group photo shoot of all the stars attending the Sunday. 🙂

The group shot photo of the Sunday guests included me with Hamish Wilson (Jamie in ‘The Mind Robber’), Matthew Waterhouse, Barry Noble (who played a Cyberman in ‘The Moonbase’ and played roles in other ‘Doctor Who’ stories), Dick Mills (‘Doctor Who’s most famous sound engineer), Colin Baker (the Sixth Doctor), Wendy Padbury, Sylvester McCoy, Anneke Wills, Shane Rimmer (Scott Tracy from ‘Thunderbirds’) and Annette Badland (Margaret Slitheen from new series ‘Doctor Who’). 🙂 Like with Saturday’s guests, I wish I’d been able to meet all of them that day.

To finish the day, I enjoyed a stage talk featuring Colin Baker who was later joined by Gareth Jenkins who appeared with the Sixth Doctor in ‘A Fix with Sontarans’. I got to ask Colin a question about ‘The Airzone Solution’, which I had seen recently and he shared memories of working with Jon Pertwee. 🙂

‘Dimensions 2013’ was a fun convention weekend to enjoy for my parents and me. It wasn’t as good as ‘Regenerations 2013′ and it was sad that Peter Davison wasn’t able to attend the Saturday, but I’m glad I was able to enjoy myself and see enough ‘Doctor Who’ stars to satisfy the inner fan in me.

It was especially great to see Sarah Sutton again who I had a great time chatting to and as ever, we shared plenty of friendly banter with each other. There weren’t any more conventions for me to attend in the rest of the 50th anniversary year. I hoped I would attend more events in the New Year.

By the way, my parents and I did chat to Shane Rimmer before we headed back home. 😀 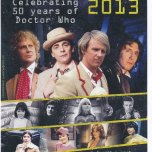 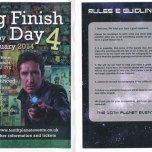 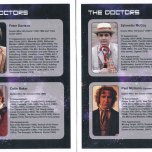 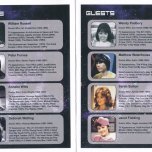