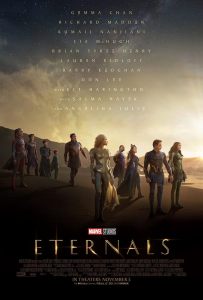 I’ve seen ‘Eternals’, the latest film in Phase Four of the ‘Marvel Cinematic Universe’. It’s ironic. We’ve had three live-action ‘MCU’ shows in ‘WandaVision’, ‘The Falcon and the Winter Soldier’ and ‘Loki’ as well an animated show called ‘What If…’ and the upcoming ‘Hawkeye’ series to look forward to. 🙂

Yet in terms of movies, we’ve only had ‘Black Widow’, ‘Shang-Chi and the Legend of the Ten Rings’ and ‘Eternals’ so far. Now granted, it’s usually two or three ‘MCU’ films that come out every year and I imagine we’re lucky we have four ‘MCU’ films for 2021 with the third ‘Spider-Man’ film coming soon.

But it’s amazing how much of the ‘MCU’ has caught up in 2021, due to the many films and TV shows being delayed due to the Covid-19 pandemic – please keep safe. I suppose it’s expected that everything should be coming all at once or at least in a shorter space of time compared to normal. 😐

Anyway, let’s talk about ‘Eternals’. The film is based on the Marvel superhero team created by Jack Kirby, who also did artwork for Stan Lee‘s superheroes like the Fantastic Four and the Incredible Hulk. I must admit, I had no knowledge about the Eternals as superheroes before going into this film.

‘Eternals’ is directed by newcomer and Academy Award winner Chloé Zhao. This is the first time I’ve come across Chloé Zhao as a director. I hoped that I’d be able to enjoy this ‘MCU’ film, regardless of not knowing much about the Eternals, and I hoped to find the characters interesting and engaging. 🙂

I certainly enjoyed the film from watching it on the big screen lately. However, before going into this film, I came across reviews for this film that were rather negative. Some might say this film is worse than previous ‘MCU’ films like ‘Thor: The Dark World’ and ‘Captain Marvel’, which is very astounding.

After watching the film however; and this is just my opinion here, I don’t think the film is that bad. Now, hear me out! It’s not a great ‘MCU’ film. No way does it win my full approval here. I feel the film does have potential. There are some nice visual shots and cinematography featured throughout it. 🙂

But I think what lets the film down is the progression of story and character development. There are too many characters to contend with, especially in a 157 minute-long film as this. Maybe if ‘Eternals’ was a two-parter, it could have worked better and we could appreciate the characters even more. 🙂

There are some surprising twists featured throughout the film, especially when one of the supposed heroes turns out to be a bad guy here. But there’s a lot crammed into the film and there are too many moments of jumping about from time zone to time zone to make the film rather jarring to see.

I’m reminded of the 2019 film adaptation of ‘Little Women’ where we kept going back and forth to past, present and future with no clarity and consistency as to where we’re supposed to be. But to the film’s credit, at least we’re given captions about where we are and when we are supposed to be.

It’s a shame really, as I do like some of the characters featured throughout the film and I would have liked more time devoted to them. Maybe the film’s follow-up will provide that. But as is, most of the characters I’ve seen in the film are very likely to be forgettable by the time I get a chance to revisit it.

Essentially, the film has the Eternals, an immortal alien race, emerging from hiding after thousands of years to protect the Earth from their ancient counterparts, the Deviants, who are four-legged monsters terrorising the Earth. They also deal with one of their Celestials coming up out of the Earth.

The film’s cast deliver good performances. There’s Gemma Chan, who I’ve seen in the ‘Doctor Who’ episode ‘The Waters of Mars’ and one of the ‘Sherlock’ episodes, as Sersi. Gemma Chan previously played a character in ‘Captain Marvel’, though there’s really no connection to that character in this film.

There’s also Richard Madden (who was in 2015’s ‘Cinderella’) as Ikaris, Kumail Nanjiani as Kingo, Lia McHugh as Sprite, Brian Tyree Henry as Phastos (who’s gay), Lauren Ridloff as Makkari (who’s deaf), Barry Keoghan as Druig and Don Lee as Gilgamesh. There’s Salma Hayek as Ajak (who was in ‘Spy Kids 3-D: Game Over’) and Angelina Jolie (who was Maleficent in her 2014 and 2019 films) as Thena.

The film also features Harish Patel as Karun, Kingo’s human valet, who very often does the comic relief in the film. And there’s Kit Harrington as Dane Whitman, who dates Sersi in the film. I found Dane a nicer guy for Sersi to go out with, compared to Ikaris, who was married to her at one time. 😐

‘Eternals’ isn’t what I would call a great ‘Marvel Cinematic Universe’ film to check out in the film series so far. It’s certainly visually impressive as well as fascinating to check out, but the film suffers in terms of the storytelling and the character development, which I feel is a big shame on reflection.

I’ve heard this argument lately that Marvel Studios as well as Marvel Entertainment are being repetitive in terms of how they conduct their formula on movies compared to DC Comics. Mind you, I knew this was the case when it came to checking out ‘Doctor Strange’ at the cinema back in 2016. 🙂

There have been too many Marvel superhero films lately and it’s clear that the barrel is running dry in terms of creating fresh ideas for new characters as well as for old characters coming back. It’s why I don’t think the ‘MCU’ is as good as it used to be when it had its humble beginnings way back in 2008.

Now, don’t get me wrong. I still enjoy the ‘MCU’ films. I hope to check out more ‘MCU’-related stuff whether it’d be films at cinemas or shows on Disney+. But there has to be a line drawn on when Marvel needs to back up a bit in order to find a way to reinvigorate their films and Disney+ shows. 😐

Otherwise, the ‘MCU’ will end up becoming tired. 😐 Meanwhile, I’m currently looking forward to seeing ‘Hawkeye’ on Disney+ and ‘Spider-Man: No Way Home’ on the big screen over Christmas.

By the way, Mahershala Ali makes an uncredited voice cameo appearance as vampire hunter Blade in the film’s post-credits scene. It would’ve been nice if we saw him and not off-screen.