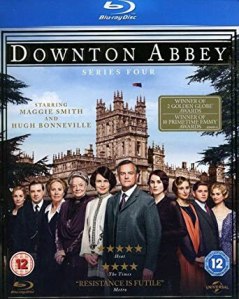 It’s time to talk about Series 4 of ‘Downton Abbey’, which I’ve finished recently on Blu-ray. And yes, I have seen the teaser trailer for ‘Downton Abbey: A New Era’, the second film due to be released in March 2022. I’m looking forward to seeing that movie, whether on the big screen or not, once it comes out.

Anyway, Series 4 looks into the period from 1922 to 1923. It follows on from ‘A Journey to the Highlands’, where Matthew Crawley was tragically killed. Six months have passed when the series begins, and Michelle Dockery as Lady Mary Crawley first struggles to face a new future without him.

Thankfully, with the help of his family and friends around her, as well as members of staff at Downton Abbey, Lady Mary is able to pull through her grief and help with seeing Downton Abbey towards a brighter future. There are obstacles along the way, especially for certain characters in this.

I enjoyed the progression of Series 4 in ‘Downton Abbey’ and how our main characters developed. Some characters face love and broken hearts. Others face psychologically damaging situations that aren’t resolved so fully by the end of the season. I’m curious about the next Christmas Special here.

Laura Carmichael returns as Lady Edith Crawley. Lady Edith has an interesting story in Series 4 since she falls in love with Charles Edwards as Michael Gregson who leaves halfway and she ends up being pregnant. I feel sorry for Lady Edith. She’s someone who doesn’t have much luck with being in love.

There’s also Jim Carter as Carson the butler, Phyllis Logan as Mrs. Hughes the housekeeper, Brenda Coyle as Mr. Bates and Joanne Froggatt as Anna, Mr. Bates’ wife. Anna has a rough time in this season, since she gets raped in the third episode, but she struggles to tell her husband all about it. 😐

Siobhan Finneran’s O’Brien character doesn’t appear in Series 4 as she left to serve Lady Flintshire in British India from the end of ‘A Journey to the Highlands’. She was first replaced by MyAnna Buring as Edna Braithwaite, who fails on her second chance, attempting to win Tom Branson’s affections. 😐

Cora soon has a new permanent lady’s maid in Raquel Cassidy as Phyllis Baxter. I’ve seen and heard Raquel Cassidy in ‘Doctor Who’. Rob James-Collier as Thomas Barrow recommended Baxter to be Cora’s new lady’s maid, only so that she can provide him gossip happening about Downton Abbey. 😐

The series also has Sophie McShera as Daisy, Lesley Nicol as Mrs. Patsmore, Matt Milne as Alfred, Ed Speleers as Jimmy, Cara Theobold as Ivy and Kevin Doyle as Molesley. Penelope Wilton also returns as Isobel Crawley along with David Robb as Dr. Clarkson as well as Lily James as Lady Rose MacClare.

Series 4 of ‘Downton Abbey’ has been enjoyable and compelling to sit through. I’m curious as to what will happen in the following Christmas Special, especially concerning John Bates and his wife Anna following the rape storyline as well as Lady Mary and Lady Edith’s predicaments in the heart. 🙂

By the way, I’ve just realised! Everyone at ‘Downton Abbey’ are Borg from ‘Star Trek’! Metro makes it clear on the Blu-ray cover, saying “Resistance is futile”! 😀