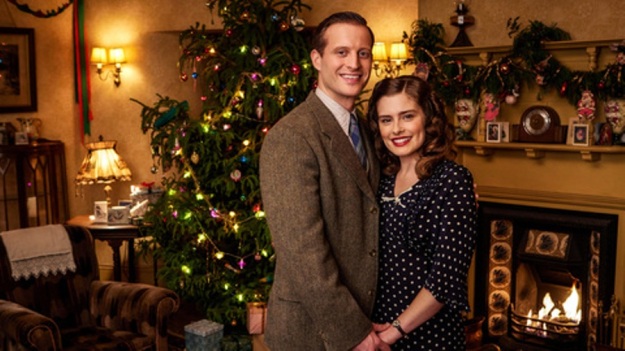 In this Christmas Special, the annual Christmas Party at Skeldale House takes place. Nicholas Ralph as James and Rachel Shenton as Helen face dilemmas as they’re to have Christmas dinner at either Skeldale House or at Helen’s family farm. I really like how James and Helen interact with each other.

James and Helen have recently become engaged and they discuss what their future is to be. They talk about things they haven’t considered, such as what Helen should do when she marries him and whether she’ll stay at Skeldale House with him or at the family farm. Intriguing this wasn’t discussed.

Mind you, James and Helen were happy in the moment when they decided to get married, so I suppose they were enjoying their engagement before considering the serious issues. I’m surprised James didn’t suggest to Helen she should be a secretary at Skeldale House as in the original TV show.

It was amusing to see James dressed up in the green Father Christmas outfit this time round and Helen became his elf. In the previous Christmas Special, Robert Hardy as Siegfried was Father Christmas whilst Callum Woodhouse as Tristan was his elf. An interesting symmetry there, isn’t it? 🙂

I was expecting James to ask the children who came to see him as Father Christmas what they want for Christmas. Instead, he just gives them oranges in wrapping paper (I think). Come on, James. Surely you could’ve had the kiddies sit on your lap for a bit whilst you were playing Father Christmas.

This episode does happen to be a Tricki-Woo-focused episode, especially when Patricia Hodge as Mrs. Pumphrey makes an appearance. I still feel sad the late Diana Rigg wasn’t able to appear in the previous Christmas Special. Anyway, our Tricki-Woo appears to have fallen seriously ill in this special.

There are echoes of ‘Merry Gentlemen’ from the original ‘All Creatures’ TV series in this special, especially concerning Tricki-Woo and Mrs. Pumphrey. I like how things get resolved, especially with James and Helen coming up with a solution, inspired from meeting a grumpy farmer in the special. 🙂

The grumpy farmer, James Burrows as Dave Kitson, is one of those farmers who doesn’t want to pay expensive bills to vets, like in the original show. Thankfully, without Kitson knowing, James saves one of his sheep with a special medicine, and Helen encourages him to use the same treatment for Tricki.

I like how the episode concludes with everyone visiting Mrs. Pumphrey at her home when she’s all alone for Christmas as she sent the staff home. James, Helen, Siegfried and Tristan are there as well as Anna Madeley as Mrs. Hall, Tony Pitts as Richard Alderson and Imogen Clawson as Jenny Alderson.

I also like how things turn out between Mrs. Hall and her love interest Will Thorp as Gerald Hammond. It was amusing to see Mrs. Hall in different outfits for the Christmas Eve party, giving her a new look, which startles Siegfried. Dorothy Atkinson also appears as Diana Brompton in the story. 🙂

It was nice to see Mollie Winnard back as Maggie in the special, though I’m feeling sorry for Tristan, as Maggie happens to be engaged to someone. It was very good that James got to make a phone call to his parents Gabriel Quigley as Hannah Herriot and Drew Cain as James Herriot Snr. on Christmas Day. 🙂

The special does conclude on a bittersweet note. Whilst James, Siegfried, Helen and Tristan are enjoying themselves at Skeldale House, Mrs. Hall is concerned by the war plane looming up in the sky. This is a foreshadowing of what is to come in Series 3 when war is soon about to be declared. 😐

Overall, the 2021 Christmas Special of the new ‘All Creatures Great and Small’ series has been a joy to watch. I’m pleased my parents and I saw it and how lucky that this special was shown on Christmas Eve instead of two days earlier. I’m looking forward to what’s to occur next in the series. 🙂

It was also nice to hear Fred Astaire singing the song ‘The Way You Look Tonight’ from the film ‘Swing Time’ in the background during this episode. 🙂