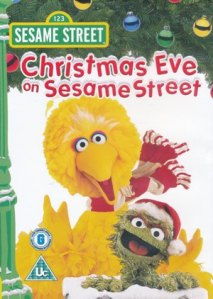 The show had educational value, especially as it was designed to be entertaining for preschoolers. Apparently, ‘Sesame Street’ is still going strong today. I even saw a funny video on YouTube where Sir Ian McKellen teaches Cookie Monster about the word ‘resist’ when using a cookie to tempt him.

So funny! I believe that was made at the time ‘The Hobbit: The Battle of the Five Armies’ was made.

Anyway, in ‘Christmas Eve on Sesame Street’, Big Bird is excited about Christmas Eve and Santa Claus coming down the chimney to deliver presents to everyone. But Oscar the Grouch asks Big Bird – “How does a guy like Santa Claus, with his big round belly, come down all those skinny chimneys?” 😐

Clearly, Oscar hasn’t seen ‘The Santa Clause’ film trilogy yet. 😀 Oscar’s question to Big Bird worries him and he and his little friend Patty try to find answers to this puzzle. They get help from Kermit the Frog and Grover to interview children about how Santa manages to get down the skinny chimneys. 🙂

Some of the answers the children give are funny and so cute, including using Santa Claus keys as well as all the reindeer going down the chimney with him. 😀 But even Snuffy who gets to re-enact Santa Claus’ attempt to go down a chimney doesn’t seem to satisfy Big Bird with answering this little puzzle.

As well as the Big Bird story of solving how Santa Claus gets down the chimney, there’s an ice skating party at the beginning of the special which has live-action versions of the ‘Sesame Street’ Muppets, including Bert, Ernie, Count and Cookie Monster. Even I could see those weren’t the real Muppets. 🙂

Their mouths didn’t even move. Also, I’m sure they’re smaller than that when on the ice rink. I enjoyed it when Big Bird danced with a little girl on the ice rink while the song ‘Feliz Navidad’ was played. There are also the songs like ‘A True Blue Miracle’ and ‘Keep Christmas with You’ performed.

I also found the Cookie Monster story very funny as he tries to get in touch with Santa Claus to bring him cookies for Christmas. In the end, he eats up his pencil to write a letter as well as his typewriter and a telephone to call Santa at the North Pole. Here’s a video containing that Cookie Monster story. 🙂

You can tell the Cookie Monster is my favourite character from ‘Sesame Street’. 😀