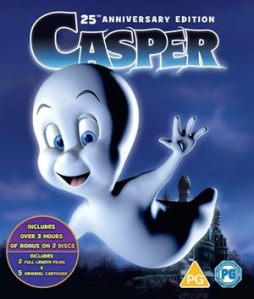 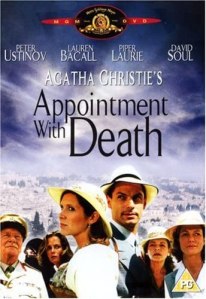 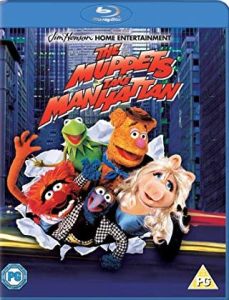 Anyway, let’s talk about some of the Christmas presents that I gave to my parents. I gave my Dad the films ‘Casper’ and ‘The Muppets Take Manhattan’ on Blu-ray. I gave my Mum the film ‘Appointment with Death’ with Peter Ustinov. We greatly enjoyed checking out these three films. 😀

It was the 25th anniversary edition of ‘Casper’ on Blu-ray that I gave to my Dad. ‘Casper’ is a 1995 film about a little ghost who wants to be friends with people. He meets up with Bill Pullman as ‘ghost therapist’ Dr. James Harvey and Christina Ricci as his daughter Kat as they visit old Whipstaff Manor.

I used to watch this film as a kid whenever it was on rented VHS or on TV. I enjoyed the film when I saw it. Upon revisiting the film on Blu-ray, I still enjoyed it. It has a fun atmosphere about it as well as aiming for something dark and creepy. It’s amazing how engaging I found the film in revisiting it. 🙂

There is meant to be the teenage love story going on between Casper (voiced by Malachi Pearson) and Christina Ricci’s Kat that I enjoyed. The film also features the likes of Cathy Moriarty as Carrigan Crittenden and Eric Idle as her attorney assistant ‘Dibs’ who want the ghosts to be out of the house.

There’s also the Ghostly Trio of Stretch (voiced by Joe Nipote), Stinkie (voiced by Joe Alaskey) and Fatso (voiced by Brad Garrett). There are also cameo appearances of Dan Aykroyd, Clint Eastwood, Rodney Dangerfield, Mel Gibson and many more. The performances of the cast are very enjoyable. 🙂

There’s a bonus disc attached to the 25th Anniversary Edition Blu-ray of ‘Casper’, which contained two feature films and five ‘Casper’ cartoons. My parents and I have seen one of the feature films – ‘Casper: A Spirited Beginning’. It wasn’t as good as the 1995 film, but I found it entertaining enough.

I recognised Shannon Chandler from ‘Big Bad Beetleborgs’ in it. James Earl Jones also voiced the Kibosh ghost in the film. For your information, I have seen some of the five ‘Casper’ cartoons and enjoyed. I haven’t checked out the other film ‘Casper’s Scare School’ since it doesn’t look that good.

My parents and I also enjoyed ‘Appointment with Death’ which happens to be Peter Ustinov’s sixth and final film appearance as Hercule Poriot by Agatha Christie. 🙂 I’m pleased I was able to get this film for my Mum in order for us to complete the Hercule Poirot film collection starring Peter Ustinov.

The film happened to be directed by Michael Winner. I previously saw Peter Ustinov as Poirot in 1978’s ‘Death on the Nile’ and 1982’s ‘Evil Under The Sun’ as well as ‘Thirteen at Dinner’, ‘Dead Man’s Folly’ and ‘Murder in Three Acts’. I enjoyed Ustinov’s Poirot in those films as well as this film.

As well as Peter Ustinov, there’s also Lauren Bacall, Carrie Fisher (Princess Leia from ‘Star Wars’), John Gielgud, Piper Laurie, Hayley Mills, Jenny Seagrove and David Soul. I enjoyed everyone’s performance in this film and it was interesting how the film resolved on who committed the murder.

Apparently this film was met with mixed reviews and it failed at the box office at the time of its release in 1988. Which is a shame considering this is a decent Hercule Poirot film with Peter Ustinov, based on the 1938 novel by Agatha Christie of the same name. It was good to watch over Christmas.

The other Christmas present I gave my Dad was ‘The Muppets Take Manhattan’. Apparently, this is a ‘Muppets’ film currently not available on Disney+. This is due to the fact that the film was released by TriStar Pictures, a Sony company. Same applies to ‘Muppets From Space’ released by Columbia. 🙂

I enjoyed ‘The Muppets Take Manhattan’. It’s not a great film and the ending’s rather anti-climactic, but I enjoyed watching it on Blu-ray with my parents. The film has the Muppet gang trying to sell a musical show to Broadway but getting nowhere. The film is filled with many comedic Muppet antics.

This film also happens to be directed by Frank Oz, who usually voices Miss Piggy and Fozzie Bear in the Muppets. The film’s cast includes Louis Zorich as Pete, who owns and is chef at Pete’s Diner; Juliana Donald as Jenny, Pete’s daughter; and Lonny Price as Ronnie, an aspiring Broadway producer.

I was amazed to see Gates McFadden (or Cheryl McFadden as in the film before she became Dr. Beverly Crusher in ‘Star Trek: TNG’) as Nancy, the secretary to Martin Price (played by Dabney Coleman in the film). A shame she didn’t have more screen-time since she’s like in only one scene. 😦 There are also cameos of Art Carney and Elliott Gould in this.

The Muppets include Kermit the Frog, Miss Piggy, Fozzie Bear, Rowlf the Dog, Dr. Teeth, Animal, Gonzo the Great and many more. It was nice to see the ‘Sesame Street’ gang too including Big Bird, Ernie and Bert, Cookie Monster, etc. Rizzo the Rat also makes an appearance in this ‘Muppets’ film. 🙂

I’m pleased my parents enjoyed the films I gave them for Christmas last year. They’ve been great to check out and each has been entertaining in their own right. I’m currently looking forward to checking out more Christmas presents, including the two films I’ve given by my best mate Stephen. 🙂