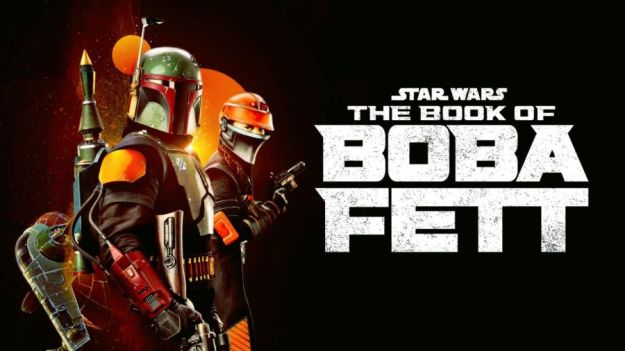 After a false start at the end of December 2021, I’ve managed to check out the complete seven-episode series of ‘The Book of Boba Fett’ in the ‘Star Wars’ universe. I’ve enjoyed watching this series on Disney+. It’s not as good as ‘The Mandalorian’ in my humble opinion, but I have enjoyed it.

When I reviewed the first episode on ‘Bradley’s Basement’, I wasn’t sure where the series was going to go. It seemed uncertain in whether it wanted to tell its story in a mixture of flashbacks or present day. After finishing ‘The Book of Boba Fett’, I’m not sure it had a clear idea about where it was going.

The series has Temeura Morrison as Boba Fett joined by his ally Ming-Na Wen as Fennec Shand, as they attempt to make a name for themselves in the galaxy’s underworld on Tatooine when they take over the territory once controlled by Jabba the Hutt. As expected, they meet opposition along the way.

Now for the first four episodes, it seemed like we were getting flashbacks focusing on Boba Fett’s past in the first half before we get to the present day to see what Boba Fett and Fennec Shand are doing with running affairs on Tatooine. Sometimes it was vice versa in certain episodes of the show.

I wouldn’t have minded this being a thing throughout each of the seven episodes if that was the direction the series was going in. Sadly, this seemed to be dropped for the rest of the series, especially with bringing back characters from ‘The Mandalorian’ series and less focus is on Boba Fett.

I don’t mind characters from ‘The Mandalorian’ series coming back to appear in ‘The Book of Boba Fett’, as they do serve a purpose in helping Boba Fett fighting the criminal underworld on Tatooine. But I would’ve preferred it if this series focused more on Boba Fett and less on the other characters.

For you see, Pedro Pascal is back as the Mandalorian. That’s great! I like Mando and I’m glad he helped Boba out. But the entire fifth episode in which he returned was dedicated to him. Boba didn’t appear in the fifth episode at all. The fifth episode is more ‘Mandalorian’ episode than ‘Boba Fett’. 😐

Grogu (Baby Yoda) is also back in the series as well as R2-D2, Mark Hamill as Luke Skywalker and Rosario Dawson as Ahsoka Tano. It was great to see those characters again. But what did they have to do with Boba Fett? Surely their scenes should’ve been saved for Season 3 of ‘The Mandalorian’ series. 😐

I know this is me being nitpicky and ‘The Book of Boba Fett’ isn’t terrible by any means. It’s a lot better than other ‘Star Wars’ things I’ve seen. I just wish the series was more Boba Fett-focused and that ‘The Mandalorian’ characters, including Mando, didn’t take up a lot of focus in certain episodes.

Another nitpick I have to mention is that ‘The Book of Boba Fett’ is a terrible title for the series. Like, what does the title even mean? That we’re supposed to view the series as a book, especially with the episodes are called ‘chapters’? Why is that necessary? ‘The Mandalorian’ series wasn’t like that. You could’ve easily called the series ‘Boba Fett’ and that would’ve been fine.

Once again, the series was created and written by Jon Favreau, joined by Dave Filoni who co-wrote the sixth episode with him. The series also has directors like Robert Rodriguez, Steph Green, Kevin Tancharoen, Bryce Dallas Howard and Dave Filoni. A couple of these directors worked on ‘The Mandalorian’ series.

The show’s cast also includes Matt Berry as the voice of 8D8, David Pasquesi as the Twi’lek majordomo to Mok Shaiz, Jennifer Beals as Garsa Fwip, Carey Jones as Krrsantan, Sophie Thatcher as Drash, Jordan Bolger as Skad, Stephen Root as Lortha Peel, Danny Trejo as the rancor trainer, Amy Sedaris as Peli Motto and Timothy Olyphant as Cobb Vanth. All of the cast are excellent in this series.

I’m currently looking forward to the ‘Obi-Wan Kenobi’ series next. 😀