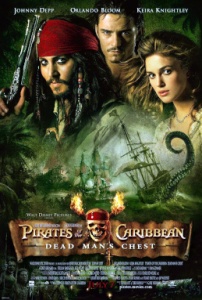 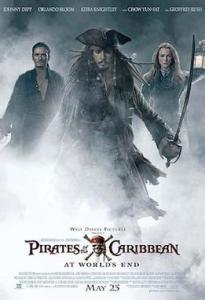 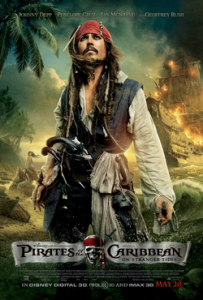 ‘The Curse of the Black Pearl’, features Johnny Depp as pirate captain Jack Sparrow who helps Orlando Bloom as Will Turner to rescue Keira Knightley as Elizabeth Swann from the cursed crew of the Black Pearl. They’re led by Geoffrey Rush as Captain Barbossa, and they become undead skeletons. 😐

Beforehand, I’d seen Johnny Deep in ‘Edward Scissorhands’. Jack Sparrow is one of Johnny Deep’s most well-known film roles and he practically owns the character with enjoyable performances throughout each of the five films. Orlando Bloom is well-known as Legolas in ‘The Lord of the Rings’.

It was nice to see him in another movie role. I was watching ‘The Return of the King’ at the same time I saw Orlando Bloom in ‘Pirates of the Caribbean’ on DVD. ‘The Curse of the Black Pearl’ was the first time I saw Kiera Knightley before she starred in 2005’s film adaptation of ‘Pride & Prejudice’.

It was also the first time I saw Geoffrey Rush before she starred in ‘The King’s Speech’ with Colin Firth. It’s also amazing to find that the first three ‘Pirates of the Caribbean’ were directed by Gore Verbinski, who previously did ‘Mouse Hunt’. I find the first ‘Pirates’ film to be the best one of the lot.

This is especially when there’s action, adventure and romance in a ‘Pirates’ film. The film’s cast also includes Jack Davenport as James Norrington, Jonathan Pryce as Governor Weatherby Swann, Kevin McNally as Joshamee Gibbs, Lee Arenberg as Pintel, Mackenzie Crook as Ragetti, Zoe Saldana (Yes, she’s in this) as Anamaria, David Ballie as Cotton, Martin Klebba as Marty and Greg Ellis as Groves. 🙂

In ‘Dead Man’s Chest’, the wedding of Will Turner and Elizabeth Swann is interrupted when Tom Hollander as Lord Cutler Becket wants Will to acquire the compass of Captain Jack Sparrow in a bid to find the Dead Man’s Chest. Jack Sparrow also finds that his debt to Bill Nighy as Davy Jones is due.

There were some interesting ideas featured throughout this second film, especially with the set up of Davy Jones and his cursed crew of the Flying Dutchman as well as his heart being cut out of him and placed in a Dead Man’s Chest. Sadly, the ideas weren’t followed up well in the following sequel.

It’s also fair to say that ‘Dead Man’s Chest’ isn’t as good compared to ‘The Curse of the Black Pearl’ when it’s the beginning of the two-part story. Mind you, the film ends on a gripping cliffhanger, as Jack Sparrow gets devoured by the monstrous Kraken and Captain Barbossa has been resurrected. 😐

The third ‘Pirates of the Caribbean’ film, ‘At World’s End’, is by the far the most convoluted and weakest of the five films in the series. I found this one a struggle to watch at the cinema, especially with it being 3 hours long instead of 2 hours, despite having an intermission when I saw the film at the cinema.

In the film, Will Turner, Elizabeth Swann, Hector Barbossa and the crew of the Black Pearl seek to rescue Captain Jack Sparrow from Davy Jones’ Locker. Very soon, they prepare to fight the East India Trading Company, led by Cutler Beckett, who controls Davy Jones and seeks out to extinguish piracy.

My problem with this film is that it’s so boring with lots of talking between characters and not understanding what half of them are saying, especially when it comes to pirate politics. The battle sequences aren’t exciting either and this film could have done with losing a hour to make it compelling.

This film also happens to be the last one (at the time) to feature Will Turner and Elizabeth Swann who end up getting married. Incidentally, the ‘motivational’ speech Elizabeth gives to the pirates before battle was uninspiring and Will and Elizabeth’s wedding during a battle on sea was so stupid.

The film’s cast also includes Chow Tun-Fat (who I’ve seen recently in ‘Anna and the King’) as Sao Feng, David Bailie as Cotton, Martin Klebba as Marty, David Schofield as Mr. Mercer, Keith Richards as Edward Teague, Greg Ellis as Groves, Lauren Maher as Scarlett, Vanessa Branch as Giselle, Angus Barnett as Mullroy, Giles New as Murtogg, Reggie Lee as Tai Huang and so many more in the cast. 😀

The fourth ‘Pirates of the Caribbean’ film, ‘On Stranger Tides’, is an improvement compared to ‘At World’s End’. I enjoyed watching the film at the cinema back in 2011 and found Johnny Depp as Jack Sparrow entertaining. Mind you, it’s a shame Orlando Bloom and Kiera Knightley weren’t in this film.

This was also the last time I saw a ‘Pirates of the Caribbean’ movie at the cinema. In the film, Jack Sparrow gets forced into a shaky alliance with Penélope Cruz as Angelica, a woman from his past, as they embark on a quest for the Fountain of Youth where Ian McShane as Blackbeard wants long life.

The film’s plot is solid enough and the characters are entertaining. Although, it probably doesn’t help that the film is not directed by Gore Verbinski, since Rob Marshall took over. The film also repeats elements that featured in the first three films, such as Geoffrey Rush’s return as Captain Barbossa. 😐

I did like it when Jack Sparrow switched cups around for Angelica to live whilst her ‘father’ Blackbeard got killed in the film’s climax. I also liked the semi-romance between a missionary and a mermaid, which could be sweet as well as pretty deadly. Did the two of them live happily ever after?

As well as Johnny Depp, Penélope Cruz, Geoffrey Rush and Ian McShane, the film also features Kevin McNally back as Joshamee Gibbs, Sam Claflin as Philip Swift the missionary, Àstrid Bergès-Frisbey as Syrena the mermaid he falls in love with, Richard Griffiths as King George II, Greg Ellis as Groves, Oscar Jaenada as the Spaniard and Keith Richards as Edward Teague. Judi Dench is also in the film. 😀

In the film, a group of ghostly Spanish Royal Navy soldiers led by Captain Armando Salazar escapes from the Devil’s Triangle. Salazar intends to kill every pirate at sea, including Jack Sparrow. Sparrow has to see the Trident of Poseidon, a powerful artefact that can break curses and control the seas.

I think the argument for this fifth film being the worst in the series is because it’s repeating things that were in previous films. This includes a cursed pirate crew and a romance between a young couple. Honestly, I would prefer that instead of a very complicated plot featured in ‘At World’s End’. 😐

Johnny Depp continues to be entertaining as Jack Sparrow and it was nice to see Orlando Bloom back as Will Turner as well as Kiera Knightley as Elizabeth, even if they appear briefly in the film. There’s Geoffrey Rush back as Captain Barbossa. Again, another reason why the films are repetitive?

The five ‘Pirates of the Caribbean’ movies have been enjoyable to watch on Disney+. I know I’ve criticised the sequels compared to the first film, but at least they’re more entertaining than the ‘Transformers’ sequels. The cast’s performances, including Johnny Depp’s Jack Sparrow, are good. 🙂