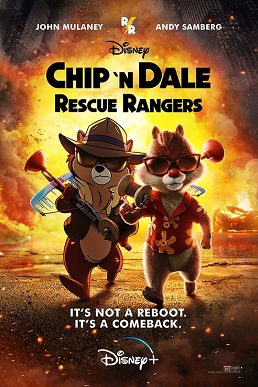 Back in the 1990s, I used to enjoy watching ‘Chip ‘n Dale: Rescue Rangers’, a Disney cartoon show that was shown on some weekends on GMTV in the UK. I know in the USA, they had the TV show shown on weekdays for their ‘Disney Afternoon’ block, but sadly I didn’t have that luxury back then.

Sadly, that’s not what we got with this movie. Now, don’t get me wrong. The film is entertaining enough. But it’s not the straight-forward ‘Chip ‘n Dale: Rescue Rangers’ movie that I was hoping for. Instead, the film went on the lines of ‘Who Framed Roger Rabbit’ and ‘Space Jam: A New Legacy’. 😦

Not that there’s anything wrong with those movies and some would argue the ‘Chip ‘n Dale: Rescue Rangers’ movie is better than them. But when I expect to see a movie version of the 1990s cartoon show I used to enjoy as a kid, I expect to enjoy that and not a film featuring a plethora of many characters.

The movie is also treated as if this was a life story of Chip ‘n Dale working at Hollywood and not about the actual show itself. If this was meant to be a Chip ‘n Dale life story at Hollywood-type of movie, I’d be fine with it. But please don’t mislead me into thinking this is a continuation of ‘Rescue Rangers’!

The film has Chip voiced by John Mulaney and Dale by Andy Samberg. John Mulaney voiced Spider-Ham (or ‘Spider-Pig’ as I call him) in ‘Spider-Man: Into the Spider-Verse’, didn’t you know? I was disappointed that Chip ‘n Dale did not have their chipmunk voices in this and just had normal voices.

Don’t get me wrong, Dale had a different voice in ‘Rescue Rangers’ compared to Chip’s high-pitched voice, and that’s fine. But I’d rather have that than John Mulaney and Andy Samberg voicing Chip ‘n Dale with their normal voices – no disrespect to the actors, since they did what they were told to do.

There are also cameos of certain characters – Disney-related and non-Disney-related – appearing in this film as well as certain Easter Eggs that I managed to spot and some I didn’t manage to spot. I tell you, I watched a YouTube video that identified all the cameos and Easter Eggs featured in this movie.

To my surprise, the ugly version of Sonic the Hedgehog from the 2019 teaser trailer of the 2020 film appears in this film (voiced by Tim Robinson). Part of me is amused that Ugly Sonic is in this film, but I have to wonder how much Disney had to pay Paramount to include Ugly Sonic in ‘Rescue Rangers’.

There’s also Chris Parnell as Dave Bollinari, Dale’s agent; and Lumière from the 1991 ‘Beauty and the Beast’ film (voiced by Jeff Bennett). There’s also Flounder from the 1989 ‘Little Mermaid’ film and Cubby, one of the Lost Boys from the 1953 ‘Peter Pan’ film. They’re both voiced by Rachel Bloom. 🙂

Baloo from the 2016 ‘Jungle Book’ film is also in this, although he could be from ‘Talespin’ as well. 😀 He’s voiced by Steven Curtis Chapman. Charles Fleischer voices Roger Rabbit again in the film and there’s a brief cameo of Scrooge McDuck from the 2017 ‘DuckTales’ show, voiced by David Tennant.

The ‘DCEU’ version of Batman (voiced by Jorma Taccone) also appears in this film when fighting against E.T. Pete from ‘Goof Troop’ and Darkwing Duck are also in this movie, both voiced by Jim Cummings. Paul Rudd, well-known as Ant-Man in the ‘MCU’, cameos as himself in this, appearing in a show called ‘Aunt-Man’. 🙂

I’m sure there are more camos and Easter Eggs I’ve missed out on, but you’d to find that out for yourself. Or not as the case maybe. If you’re expecting this to be a proper film adaptation of ‘Chip ‘n Dale: Rescue Rangers’, then you’re bound to be severely disappointed once you watch it on Disney+.

This 2022 film tries to do too much when ‘Chip ‘n Dale: Rescue Rangers’ would’ve been more than enough. I didn’t want this film to be like ‘Who Framed Roger Rabbit’ and ‘Space Jam: A New Legacy’. I wanted this to be like the 1990s cartoon show it was based on. It’s a shame this didn’t satisfy me. 😦

If you enjoyed this film and rate it highly like the critics seem to at present, then I’m happy for you. There is some entertainment value to be found in this film. Just not in the way you expect. I’ll give this film though. It has given me some ideas on how to do my 60th anniversary ‘Doctor Who’ special. 😀

Watch this space for updates on that. 😀 Meanwhile, I might go and check out the actual ‘Chip ‘n Dale: Rescue Rangers’ cartoon show sometime on Disney+.