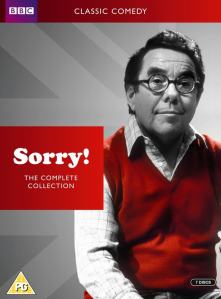 It’s time for me to share the birthday present I received from Stephen, my best mate from school, in 2022. This year, I had the complete collection of the classic BBC sitcom series ‘Sorry!’, starring Ronnie Corbett. This was shown from 1981 to 1988. I’ve greatly enjoyed watching ‘Sorry!’ as a series.

I must admit, I never got into ‘The Two Ronnies’ double-act featuring Ronnie Corbett and Ronnie Barker. I found it a struggle to watch a couple of their TV episodes on DVD, even if there were a few scenes between them that are genuinely funny. Maybe it does take a while to get into their comedy.

However, he’s hampered by his domineering mother – Barbara Lott as Phyllis Lumsden – who’s stuck in the past and treats Timothy as a little boy. Timothy has support from his father William Moore as Sidney Lumsden, his sister Marguerite Hardiman as Muriel and his best friend Roy Holder as Frank. 🙂

It was great to watch this series in its complete collection on DVD. ‘Sorry!’ lasted for seven seasons, which is an impressive run for a sitcom show. And yes, Ronnie Corbett’s character has the tendency to say “Sorry” a lot in the series. I can relate to that, as I used to say “Sorry” a lot when I was young. 🙂

I did wonder if my best mate Stephen got ‘Sorry!’ for me for my birthday because I have the same name as Ronnie Corbett’s character. Thankfully, that’s not the case as it’s just a coincidence. Plus, my mum’s nothing at all like Timothy’s mum in ‘Sorry!’. Timothy’s mother is simply an awful person.

Timothy’s mother ruins his chances of happiness, especially when he desires to be with the girl of his dreams and he can’t get a break from his mother. Timothy’s mother can be very manipulative and deceitful. I was able to pick up on these lies and deceit on Mrs. Lumsden’s part halfway in the series.

I like it that Timothy gets on well with his father, who often gets the brunt of Mrs. Lumsden’s bad treatment. One of Sidney Lumsden’s well-known catchphrases is “Language, Timothy!”, even when Timothy isn’t even using bad language. I guess Mr. Lumsden and Captain America would get on well.

It was also interesting to see Timothy’s relationship with his sister Muriel, who’s often quite frustrated by her brother’s shyness and being at home with their mother a lot, despite loving her brother so much. Muriel isn’t well-treated by Mrs. Lumsden either, because she left home to be married.

Derek Fuke plays Kevin, Muriel’s husband in the series. It was nice to see Roy Holder (who I’ve met once in ‘Pandorica 2015’ back in September 2015 and he played Krepler in the ‘Doctor Who’ story ‘The Caves of Androzani’). I’ve also seen Roy Holder in ‘Terry & June’ as well as a ‘Star Cops’ episode.

The cast also includes Wendy Allnutt who briefly appeared as Annette in the show’s first episode and then as Jennifer in Series 6. I was hoping for Timothy and Jennifer to get married by the end of Series 6, but Mrs. Lumsden put a stop to that. There’s also Bridget Brice as Pippa, who appears in Series 7.

At least Timothy gets to have a happy ending with Pippa at the end of Series 7. There’s also Mavis Pugh, who’s been in ‘Dad’s Army’ and ‘Fawlty Towers’, as Mrs. Barrable. There’s Sheila Fearn, who’s been in ‘The Likely Lads’ and ‘Whatever Happened to Likely Lads’, as Freddie, appearing in Series 3. 🙂

John Leeson (of all people! 😀 ) appears as Victor in the first two seasons of ‘Sorry!’ There was also a special guest star appearance of David Daker in one of the episodes. I’ve seen David Daker in ‘Doctor Who’ stories ‘The Time Warrior’ and ‘Nightmare of Eden’ as well as an episode in the original ‘All Creatures Great and Small’. 😀