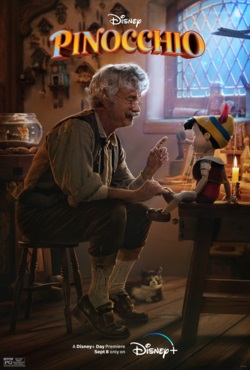 Last weekend, I saw the latest Disney live-action remake of ‘Pinocchio’, directed by Robert Zemeckis of ‘Back to the Future’ fame and based on the 1940 animated film of the same name. The film stars Tom Hanks, well-known for voicing Woody in ‘Toy Story’ and for being in 2004’s ‘The Polar Express’.

I must admit, it has been a while since I’ve seen the 1940 animated ‘Pinocchio’ film by Disney. I liked the original film fine enough when I saw it as a kid. I didn’t know what to expect when it came to seeing this 2022 live-action remake film. I hoped that I would enjoy the film when I saw it recently on Disney+. 🙂

Whilst I enjoyed some aspects of the film in general, I can’t help but feel disappointed by it, especially in terms of the film’s ending, which I’ll get into more by the time this review comes to a close. I feel that the 1940 animated movie by Disney is better than the 2022 live-action remake film.

Like the 1940 film, the 2022 film is based on the 1883 Italian book ‘The Adventures of Pinocchio’ by Carlo Collodi. The film focuses on a wooden puppet in the shape of a boy named Pinocchio, who gets brought to life by a blue fairy. Pinocchio has to earn his and his father’s wish to become a real boy. 🙂

There were things featured in the new ‘Pinocchio’ film that I liked, especially with how the characters of Pinocchio and Jiminy Cricket were developed. It was also nice to see Pinocchio interact with characters new to the 2022 film, like Kyanne Lamaya as Fabiana and her puppet Sabina, voiced by Jaquita Ta’le. Mind you, I thought Sabina would have been voiced by Kyanne Lamaya as Fabiana as the same person.

Tom Hanks is very good as Geppetto, the kind-hearted and lonely woodcarver and toymaker who builds and raises Pinocchio as his son. Mind you, I question how he acquired clocks with models from ‘Who Framed Roger Rabbit’ and the original ‘Lion King’ film. Surely this film takes place in the 1880s.

‘Who Framed Roger Rabbit’ and ‘The Lion King’ happened years later. There’s also Cynthia Erivo as the Blue Fairy. Honestly, it’s not a big deal that the Blue Fairy is played by a black woman in this film compared to the original movie’s version where she was clearly a white, blonde-haired woman in blue.

However, I’m disappointed the Blue Fairy didn’t have more than one scene in the new film compared to the original. I also feel that Cynthia Erivo is out of tune when she sings ‘When You Wish Upon a Star’. The film also features Giuseppe Battiston as Stromboli, the cruel, greedy puppeteer who keeps Pinocchio to perform onstage to make money. I don’t feel there’s enough of him in this. 😦

There’s Jamie Demetriou as the unnamed aggressive school headmaster who throws Pinocchio out of school due to him being a puppet. That is a scene that I don’t think was in the original film and I think it is one of the good scenes of the new film. Although, surely Pinocchio’s father Geppetto would have prepared his wooden son to be ready for rejection by the schoolmaster and the children.

Apparently, Angus Wright from ‘The Sarah Jane Adventures’ and a couple of ‘Doctor Who’ audios by Big Finish was in this film, playing Signore Rizzie. There’s also Sheila Atim as Signora Vitelli. And there’s Luke Evans as the Coachman, who is also the wicked owner of Pleasure Island. I didn’t approve of his character saying “Bollocks” and ‘bleedin’ in the film. That just sounded really out of tone in the film.

There’s Lewin Lloyd as Lampwick, the mischievous boy Pinocchio befriends at Pleasure Island. Pinocchio himself is voiced by Benjamin Evan Ainsworth. I know I should make the obvious point that Pinocchio is CGIed throughout the film, but honestly it’s not a surprise when watching the film itself.

Jiminy Cricket is voiced by Joseph Gordon-Levitt (who you might have seen in ‘The Dark Knight Rises’). There’s Sofia, a friendly seagull new to the film, voiced by Lorraine Braco, and there’s Honest John, the red fox who cons Pinocchio into joining the show profession, voiced by Keegan-Michael Key.

Honest John is of course joined by Gideon, the silent cat. Other silent characters in the film include Figaro, Geppetto’s cat (who I could tell was CGI and just looked awful. Couldn’t they have used a real cat in this?), Cleo, Geppetto’s goldfish, and Monstro the Sea Monster (or whale as he once was).

It was nice to hear some of the songs featured in this film from the original film, including ‘Hi-Diddle-Dee-Dee’ and ‘I’ve Got No Strings’. Sadly, ‘Give a Little Whistle’ isn’t included in the new film, which is a shame. I didn’t care for the four new songs in the new film like ‘When He Was Here with Me’. 😦

I wish I could say I liked 2022’s ‘Pinocchio’, since it seems to have a lot of promise with harking back to the original film. I would have liked to have seen Pinocchio become a real boy by the end of the film, since that was what seemed to be promised and it would have been very interesting to see.

Sadly, when the end credits rolled up, I felt unhappy with how the film made it seem like that Pinocchio didn’t need to be a real boy after all, but just have the heart of one. It didn’t feel very fulfilling. I honestly feel the original 1940 film is better compared to how the 2022 film turned out. 😦