After three years since I last went to Amroth for a week’s holiday in April 2019, my parents and I returned to Amroth in West Wales for the first time in a long while. It was nice to revisit Amroth again as well as Wiseman’s Bridge, Saundersfoot and Tenby after going through the two Covid years.

Last week was a very relaxing week in a caravan at the caravan site next to Amroth Castle. It was nice to recharge our batteries and to enjoy the sunshine we had that week. My parents and I were fortunate that the weather was mostly dry, as we got to enjoy the sites and the neighbouring towns. 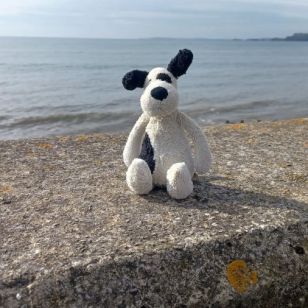 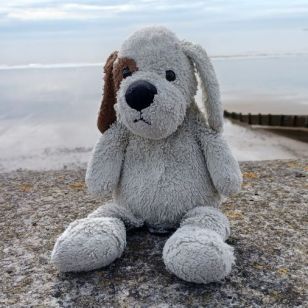 We arrived in Amroth on Sunday evening on the 11th of September. The following day, we spent looking around Amroth and enjoying the seaside. My cuddly toy dogs Buggles, Cuddles and Puddles enjoyed themselves too. 😀 I took photos of the dogs sitting on a ledge against the seaside backdrop.

It was great to see the fish made of plastic bottles still there in Amroth and it was good to see the cafes and shops, including the ice cream shop where I took a photo of the giant whippy with a flake in it. Sadly, the Postman Pat car seems to be no longer there, which is a shame, since I liked seeing it.

The giant fish in Amroth, September 2022 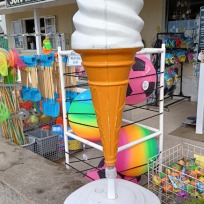 A giant whippy in Amroth, September 2022 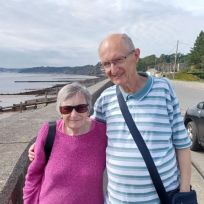 Mum and Dad in Amroth, September 2022 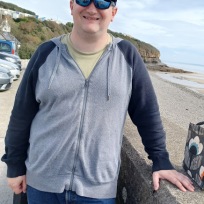 My parents and I had a drink at a nearby pub in Amroth and I took a photo of my parents before they took a photo of me. We spent the rest of Monday enjoying ourselves in the caravan. Later that evening, my Mum and I had a walk beside the seaside and we bought some takeaway chips to share. 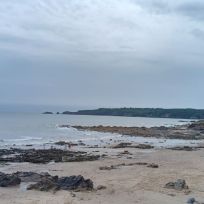 Cuddles and Buggles in Saundersfoot, September 2022 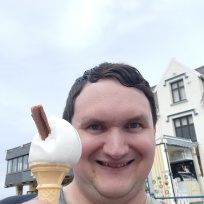 Mum and Dad in Saundersfoot, September 2022

We enjoyed going through the tunnel from Wiseman’s Bridge into Saundersfoot. At Saundersfoot, my parents and I walked on the beach, and I took a photo of Cuddles and Buggles on some rocks at the beach. They enjoyed themselves. 😀 My parents and I also enjoyed having ice creams that day. 🙂

Sadly, the shop called Sutton’s seems to have gone in Saundersfoot. I’ll never know if it belonged to Sarah Sutton. 😀 It was amazing to find out what was the same and what had changed since the last time I had been to a place on holiday. Maybe the Sutton’s shop went out of business during Covid-19. 😐

Wednesday was a brighter day, and I took a couple of photos of Amroth at its sunny best. My parents and I also went to Tenby. We enjoyed revisiting some of the shops and cafes there. We visited the Old Chapel, a Christian bookshop and coffee shop. We enjoyed looking around the place.

Cuddles and Buggles with Giant Ted at the Old Chapel, Tenby, September 2022

Cuddles on a rocking horse at the Old Chapel, Tenby in September 2022 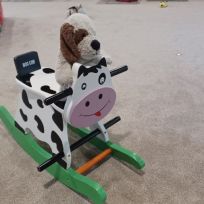 Cuddles on a rocking cow at the Old Chapel, Tenby in September 2022 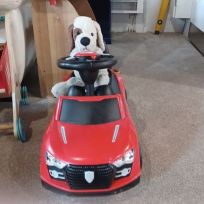 Cuddles in a red car at the Old Chapel, Tenby in September 2022 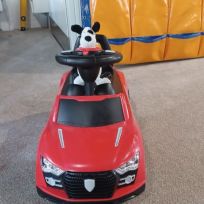 Buggles in a red car at the Old Chapel, Tenby in September 2022

Cuddles and Buggles in a red car at the Old Chapel, Tenby in September 2022

It was nice to see the books on display as well as the cards. The Carers’ and Toddlers Group was happening that morning and I took photos of Cuddles and Buggles meeting ‘Giant Ted’ and riding on a rocking horse, a rocking cow and in a red car. It was good fun to take those photos of the dogs at the Old Chapel. 🙂

I enjoyed seeing Tenby at its best in the sunshine when taking photos of the seafront. We enjoyed having a spot of lunch somewhere as well as a cup of tea before we went back to Amroth via bus. I purchased a ‘Spider-Man’ comic from WHSmith’s as well as some Wonka bars from a sweet shop. 😀

Thursday was the last day of our holiday in Amroth in West Wales. We went to Wiseman’s Bridge again and had lasagne meals at the Wiseman’s Bridge Inn. I had to take a photo of the Welsh dragon there. 😀 We also revisited Saundersfoot before we returned to Amroth and before returning home.

Throughout the week, I’ve been preparing notes for my 60th anniversary special of ‘Doctor Who’ I’m working on for ‘Bradley’s Basement’. I’ve also enjoyed listening to some of ‘The Moon Stallion’ audiobook on my MP3 player as well as a couple of 1960s ‘Avengers’ audio episodes by Big Finish. 🙂

On my android tablet, I’ve enjoyed watching movies like ‘Spy Kids 3: Game Over’ as well as the two Norman Wisdom films ‘On the Beat’ and ‘The Early Bird’. I’ve also enjoyed two episodes of ‘Moon Knight’ so far on Disney+. I also enjoyed revisiting the ‘Doctor Who’ story ‘The Visitation’ on Britbox.

The Amroth holiday this year has been one of relaxation and reflection. It was nice for my parents and I to revisit Amroth in West Wales after a few years of not going there. I’m looking forward to when we can enjoy another holiday, whether it’d be for a week or so in Amroth in West Wales or not.