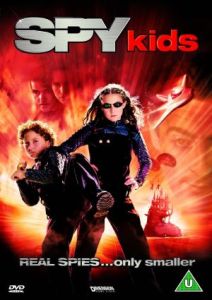 I’ve been wanting to talk about this film series for quite some time, as the ‘Spy Kids’ films mean a lot to me. Well, the first three films more than the fourth film, but we’ll get into that a little more later on. The ‘Spy Kids’ films were created by Robert Rodriguez, who wrote, directed and edited the films.

The first ‘Spy Kids’ movie was released in 2001 and was a success with audiences and critics. The film focuses on two children, Carmen and Juni Cortez, whose parents are actually spies for the OSS. When the parents are kidnapped, Carmen and Juni end up on a rescue mission to save their parents.

Thus, they become the Spy Kids. I didn’t see the first ‘Spy Kids’ film when it came out at cinemas, but I enjoyed watching it on DVD when my Dad purchased it for me back in November 2001. I enjoyed the action-packed fun adventure Carmen and Juni had as well as the thrill of them becoming spies. 🙂

As a kid, this was an exciting film for me, and I couldn’t wait for there to be a sequel so I could see it at the cinema. I still enjoy the first ‘Spy Kids’ film to this day and I appreciate the clever writing and direction Robert Rodrigeuz gave in terms of developing Carmen and Juni’s characters as the Spy Kids.

The second ‘Spy Kids’ movie called ‘Spy Kids 2: The Island of Lost Dreams’ was equally fun to watch and I enjoyed watching it on the big screen when it was released in the summer of 2002. Carmen and Juni are back and they have rivals in the form of Donnagon Giggles’ two children, Gary and Gerti.

As well as Alexa Vega as Carmen and Daryl as Juni and as well as Antonio Banderas as Gregorio and Carla Gugino, the film features Mike Judge as Donnagon Giggles with his two children Matt O’Leary as Gary and Emily Osment as Gerti. Donnagon becomes the villain of this second ‘Spy Kids’ movie. 😮

There’s also the introduction of Ricardo “KHAN!!!” Montalbán as Grandpa Valentin and Holland Taylor as Grandma Helga, Ingrid’s parents. There’s Christopher McDonald as the President of the United States and Taylor Momson (who was in the 2000 film ‘The Grinch’) as his daughter Alexandra.

It was also exciting to see this film in 3-D when I saw it at the cinema. Daryl Sabara returns as Juni Cortez to go in and rescue his sister Alexa Vega as Carmen from a deadly virtual reality video game called ‘Game Over’ created by Sylvester Stallone as the evil Toymaker. Not the Celestial one, mind. 🙂

I found the film engaging enough, despite not featuring enough of Carmen in it and most of the ‘Spy Kids’ universe characters appearing in the film’s climax for the final showdown. Ricardo Montalbán has a bigger role as Grandpa Valentin in ‘Spy Kids 3D’ compared to his appearance in ‘Spy Kids 2’.

There are also new characters featured in the film, including Bobby Edner as Francis, Courtney Jines as Demetra, Ryan Pinkston as Arnold, Robert Vito as Rez and Salma Hayek as Francesca Giggles. I was amazed to see Elijah Wood as the Guy, having seen him as Frodo in ‘The Lord of the Rings’ films. Selena Gomez makes an appearance and James Paxton, Bill Paxton’s son, briefly appears as Little Dink. 😀

In summing up the original ‘Spy Kids’ film trilogy from 2001 to 2003, I hold fond memories of those movies. They can be flawed in places, but I look back on these films with great affection, as I enjoyed the action-packed fun adventures featured in them as well as the array of very enjoyable characters.

And then…(sighs)…you know, the fourth film happened. 😦 Now, let me be clear. I wouldn’t mind ‘Spy Kids: All the Time in the World’ being the start of ‘the next generation’ of ‘Spy Kids’ movies, as I’m sure that is what Robert Rodrigeuz tried to aim for when he made this movie to be released in 2011.

However, the fourth film doesn’t feel like it’s a part of the same film series, since the jokes are often unfunny, the action is way too fast-paced, the dialogue and plot aren’t very good and there are too many ‘time’-related puns to compete against the amount of ice puns contained in ‘Batman & Robin’.

The film features Jessica Alba (from the ‘Fantastic Four’ films) as Marissa Cortez Wilson trying to be the mother of her stepchildren Rowan Blanchard as Rebecca and Mason Cook as Cecil. In the end, Rebecca and Cecil discover their stepmother is a spy and they become Spy Kids in order to save the world.

Alexa Vega and Daryl Sabara make a return as Carmen and Juni Cortez, but there’s not enough time for the film to spend on their return, which is a shame. 😦 There’s also Joel McHale as Wilbur, Marissa’s husband, who doesn’t know that his wife is a spy, which I found odd whilst watching the film. 😐

This film is supposed to be in 4-D where you use ‘Aroma-scope’ scratch and sniff cards throughout the film. But since this is a lazy idea and the film has a number of fart jokes in it, I refused to use the cards when watching the film on DVD. I found using the 3-D glasses during ‘Spy Kids 3D’ a lot better.

I’ve heard mention of there being a fifth ‘Spy Kids’ film in development and maybe it will be released on Netflix rather than at the cinema. Whether I see that film or not, I don’t know. I hope it’ll be better than the fourth ‘Spy Kids’ movie. Perhaps it will have better writing and acting throughout. 😐

For now, I’m content in the knowledge that there are three ‘Spy Kids’ movies from 2001 to 2003 that I can enjoy on DVD. I’m not fussed about the fourth ‘Spy Kids’ film. Hopefully one day, I’ll be able to find time to do in-depth reviews on each of the four ‘Spy Kids’ films to explain how much I feel about them.