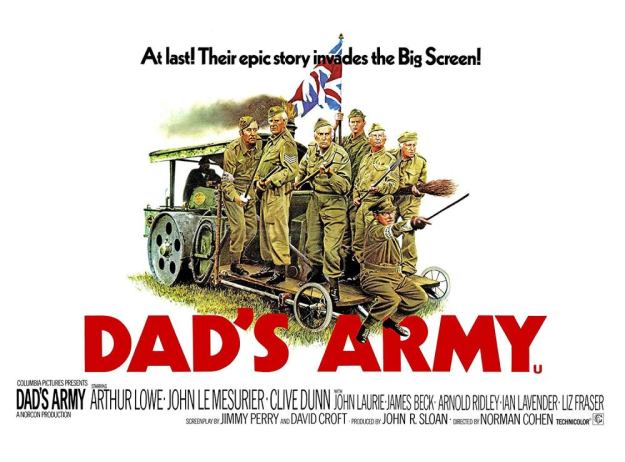 In 1971, ‘Dad’s Army’ had become a huge success. The TV show had been on for four seasons by that point. It would go on to have its first Christmas Special in ‘Battle of the Giants!’ and later have Series 5 in 1972. But before that, the ‘Dad’s Army’ cast and crew went to Hollywood to make their movie! 🙂

‘Dad’s Army: The Movie’ was released by Columbia Pictures. It was directed by Norman Cohen, produced by John R. Sloan and its screenplay was by the TV show’s creators Jimmy Perry and David Croft. And of course it featured the original ‘Dad’s Army’ cast who had starred in the classic TV show.

Around the time, a lot of UK TV sitcoms were made into movies. As well as ‘Dad’s Army’, there was also ‘Steptoe & Son’, ‘The Likely Lads’ and ‘On the Buses’ getting their own movies. Most of these movies were outside the continuity of the original TV series. The ‘Dad’s Army’ movie is no exception! 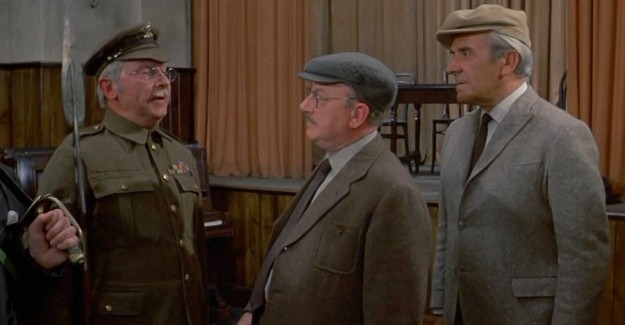 The ‘Dad’s Army’ movie is more of a retelling of the ‘Dad’s Army’ TV series but with a bigger budget. It starts the story from scratch based on ‘The Man and the Hour’ pilot episode as the Walmington-on-Sea men get called and become Local Defence Volunteers before they become the Home Guards.

There are also traces of other early episodes of ‘Dad’s Army’ fitted into the movie based on the TV scripts. This includes episodes like ‘The Armoured Might of Lance Corporal Jones’ and ‘Battle School’ from Series 3. I recognised these aspects in adapting from TV into film after I watched the TV series!

A shame that ‘The Deadly Attachment’ was made after the ‘Dad’s Army’ movie as that would’ve made it better compared to what it actually ended up being. With that said, there is a German scout plane that crashes into Walmington-on-Sea and the ‘Dad’s Army’ team save the town from German pilots.

Going back to a previous remark I made, I’m not saying the ‘Dad’s Army’ movie is terrible. Far from it! In fact, as I stated before, it’s better than the 2016 movie. But the 1971 ‘Dad’s Army’ film isn’t a masterpiece. It’s a retread of some early ‘Dad’s Army’ episode with new plot elements to help it out.

Also, because it’s a movie that exists outside the main ‘Dad’s Army’ continuity, it doesn’t have to be taken seriously. It’s like it exists in a parallel universe. There are lots of differences in the movie compared to the TV series. For example, Nazis and old WWII footage gets shown in the actual movie.

David Croft was reframed from including old WWII footage in the opening titles for the TV series. Here, the ‘Dad’s Army’ movie is allowed to include that. It also lets us see what the war is like from the Nazis’ point of view as well as Walmington-on-Sea’s with intriguing and amusing comparisons. 😀

There are also minor differences from TV show into movie. For one thing, the bank isn’t called Swallows Bank. It’s called Martin’s instead. Hodges is also Chief Air Raid Warden already in the film; the Vicar and the Verger are already established and Frazer is the funeral director already unlike in TV.

Arthur Lowe as ever is brilliant as Captain Mainwaring in the movie. I enjoyed how determined he is to defend Britain to the last, despite the opposition he gets especially from those like Major General Fullard who puts him down. I like how he confronted that German pilot in the film’s dramatic finale.

John Le Mesurier is equally brilliant as Sgt. Wilson in the movie. He maintains the laid-back, nonchalant attitude that provides a good foil for Mainwaring. He also quietly supports Mainwaring within the Home Guard, despite him being politer, posh and not militant as Mainwaring would like. 🙂 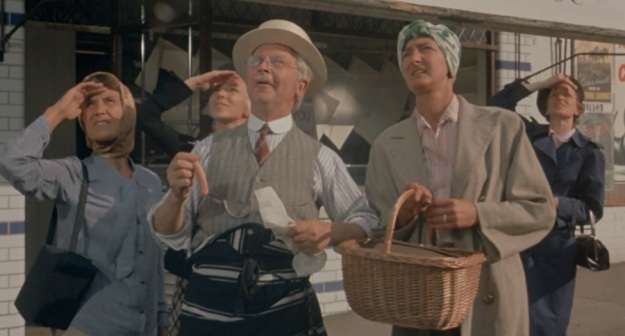 I enjoyed Clive Dunn as Lance Corporal Jones in the film. Jonesy is pretty enthusiastic despite being of old age. I could hear more of him sharing stories of being in the Sudan and saying ‘they don’t like it up ’em’. That moment when he blows up the gas bag on his van with a bayonet was very funny. 😀

John Laurie as Private Frazer is equally good, being the cynical Scottish soldier as usual. I should point out a lot of the ‘privates’ don’t get much to do compared to the main leads. But Frazer has stand-out moments, including when he gets annoyed with Jonesy ruining his oil weapon for the road.

James Beck is excellent as Private Walker in this movie. Not meaning to be a downer, but I’m glad this movie was made before he passed away in 1973. I enjoyed Walker’s spiv stuff in the film and it was amusing when he got inside Jonesy’s bathtub tank that very soon ended up falling into the river.

Arnold Ridley was funny as Godfrey in the movie. There’s a scene where Godfrey is out in the pouring rain on guard duty and he recites a poem to keep his mind off ‘being excused’. Admittedly that’s taken from the episode ‘Battle School’, but it’s amusing how it found its way here into the film.

Ian Lavender is very good as Pike in the film. I don’t think Pike is particularly stand-out in the movie. He’s quieter and reserved compared to being in the TV series, especially during a line-up scene. It was funny when Pike had to do Walker’s guard duty instead whilst Walker attended to his ‘mother’!

The film also features Liz Frazer as…Mrs. Pike. Not Janet Davies. Okay, now this is interesting. Liz Frazer is well-known for being in ‘Carry On’ films. The reason she was cast as Mrs. Pike instead of Janet Davies is because she was more ‘sexier’ and less ‘homely’. I would have preferred Janet Davies.

Now that’s not to say Liz Frazer is terrible as Mrs. Pike. She plays the character decently well for the few scenes she’s in. But she doesn’t match to the edge Janet Davies had with Mrs. Pike in the TV series. Jimmy Perry wasn’t happy with the casting decision of Liz Frazer. It was imposed by Columbia.

And the reason for that is…Mainwaring wouldn’t cash his cheque to him at the bank upon first meeting. Now I believe Mainwaring was in the right when suspecting Fullard might be a spy. But Mainwaring’s mistakes in being commander of the platoon don’t help to win Fullard’s approval here. 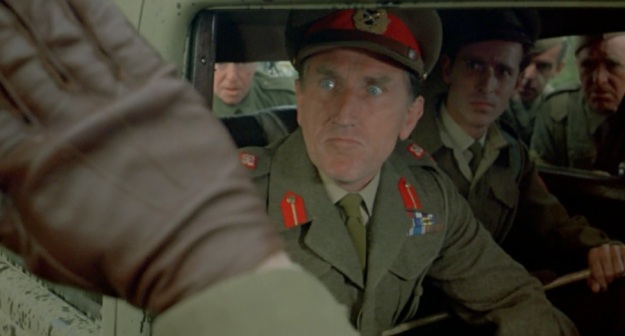 There were plans for a sequel to the ‘Dad’s Army’ movie. Sadly that didn’t happen, which is a shame. The film had mixed reviews despite performing well at the box office. Apparently the sequel would’ve been called ‘Dad’s Army and the Secret U-Boat Base’. Possible ‘Deadly Attachment’ movie? 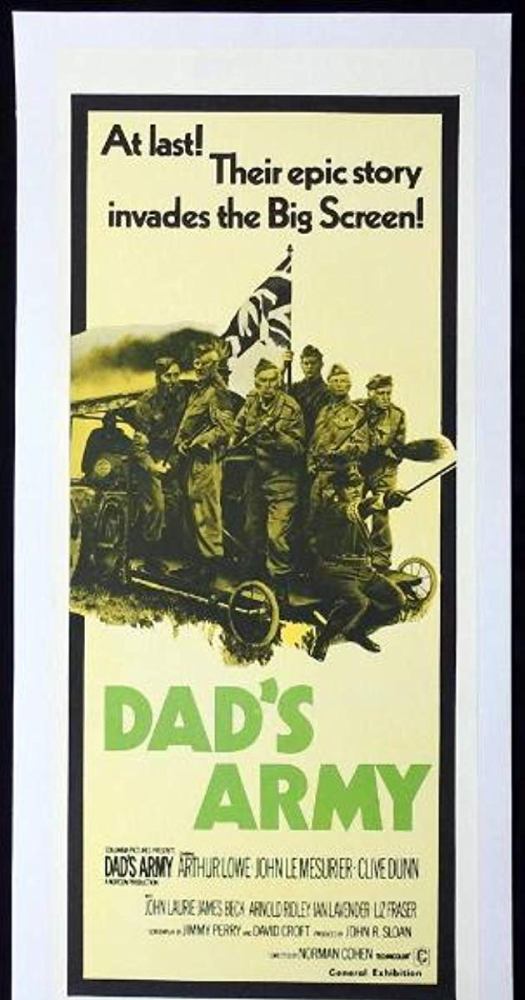 ‘Dad’s Army: The Movie’ is an enjoyable ride featuring the ‘Dad’s Army’ cast in a big-budget movie by Columbia Pictures. It’s not the greatest spectacle, but for what it’s worth I’m very happy to have seen it. It’s a better film adaptation of the TV show and remains really true with our main characters.