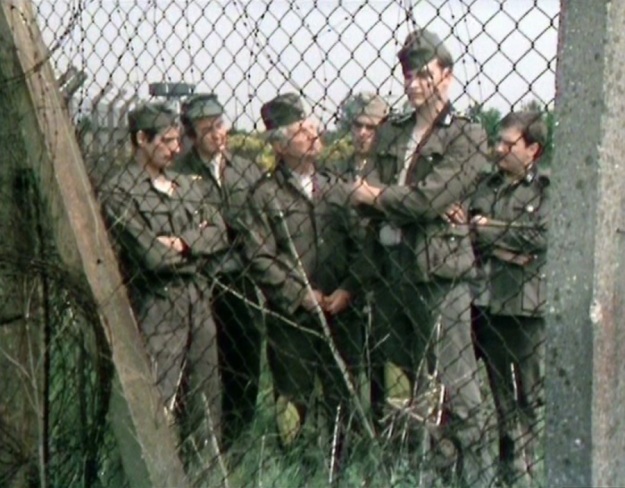 In the last episode of Series 8, the ‘Dad’s Army’ team advertise the Home Guard in Walmington-on-Sea by having Jones’ face on the poster. But Jones’ face ends up on a ‘wanted’ prisoner-of-war poster instead of a Home Guard poster. Will Jones be saved by Mainwaring and the rest of the men?

I’m afraid this isn’t one of my favourite ‘Dad’s Army’ episodes. I didn’t like how Jones ended up being branded as a ‘wanted’ prisoner-of-war by mistake. He gets badly treated by the Polish officer who catches him. The Polish officer becomes unreasonable, even when Mainwaring tried to save Jonesy.

The episode also features Harold Bennett as Mr. Blewitt. There’s also Edward Sinclair as the Verger and Frank Williams as the Vicar who take part in a ballot to select the best person to have his photo taken in the Home Guard poster. And there’s Gabor Vernon as the Polish Army Major in the episode.

I did like the scenes where Jonesy tried to get his photo taken by Mr. Blewitt who was hired by Frazer. They make several attempts to take the photo, but Jonesy messes it up by either sneezing or seeing a fly buzzing around him. Frazer gets pretty annoyed with Jonesy as he tells him to ‘hold still’.

Mainwaring isn’t happy with the arrangement of the photo being taken when he comes in to see Mr. Blewitt doing it. Thankfully they work it out as they get Jonesy’s face through Mr. Blewitt’s bed sheets, ripped open by Pike. It was very funny when Pike told Blewitt that he hadn’t got the slate in.

For me, ‘The Face on the Poster’ is not the best episode to end Series 8 of ‘Dad’s Army’. I didn’t like how the ‘Dad’s Army’ team got mistreated and eventually end up with Jonesy in the prisoner-of-war camp. Obviously they get freed in the end, but I found that this episode didn’t satisfy me altogether.

On Disc 12 of ‘The Complete ‘Dad’s Army’ DVD collection’, there’s ‘We Are The Boys…Clive Dunn’, focusing on the actor who played Jones in the series. There’s also a photo gallery of Series 8.