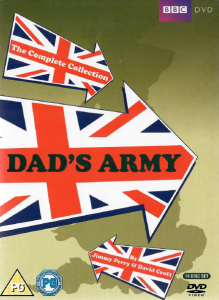 While Captain Mainwaring and his men prepare to do the Morris Dance at the church hall for the Spitfire Fund, Lance Corporal Jones’ relationship with Mrs. Fox is about to be ruined. She’s apparently dating Eric Longworth as Mr. Gordon the Town Clerk. Jonesy is in a state and asks Mr. Mainwaring for help.

He asks Mr. Mainwaring to talk to Mrs. Fox. Whilst he’s reluctant, Mainwaring agrees to see Pamela Cundell as Mrs. Fox for morning coffee at the Mairgold Tea Rooms. Very soon, it goes wrong and he’s in trouble with his wife. Meanwhile a lady gets selected to play Lady Godiva in the upcoming procession.

This is one of my favourite ‘Dad’s Army’ episodes from Series 7. It has grown on me over the years. I love that Morris Dance scene of the ‘Dad’s Army’ characters when they get to practice in the church hall. It was funny when Jones and Frazer hit each other’s sticks and Wilson also wears the horse’s head.

This episode highlights more on Jones’ relationship with Mrs. Fox in the ‘Dad’s Army’ series. Jonesy insists that Mr. Mainwaring talks to Mrs. Fox about her dating the Town Clerk. Mainwaring meets up with her in the Marigold Tea Rooms and Mrs. Fox mistakenly believes that he fancies her as a result.

The ‘Dad’s Army’ team also have a shock when Bill Pertwee as Chief Warden Hodges gets semi-naked ladies in the church hall to audition for the part of Lady Godiva. Mainwaring is outraged when he sees Hodges, the Town Clerk, Frank Williams as the Vicar and Edward Sinclair as the Verger conducting this.

I did enjoy the Town Clerk’s line about “Fleshings!” in the episode. Pike gets to repeat that line with more expression. It is feared that Janet Davies as Mrs. Pike might want to play Lady Godiva in the procession. Eventually, Mrs. Fox gets chosen to be Lady Godiva. But it turns out it’s not Mrs. Fox after all.

I like how the episode ends with Mrs. Fox losing her ‘fleshings’ to play Lady Godiva after they get stolen. Somebody else plays Lady Godiva instead. Mainwaring gets a shock when he sees who Lady Godiva is in the procession. The horse is shocked too! 😀 It isn’t Mrs. Pike though! It’s Mrs. Mainwaring!

‘The Godiva Affair’ is very funny as a ‘Dad’s Army’ episode. I enjoyed how Jonesy gets panicky about his relationship with Mrs. Fox being in jeopardy. It was also funny to see Mr. Mainwaring’s reaction to his wife playing Lady Godiva in the procession. It’s done so well as we’re not allowed to see Mrs. Mainwaring. 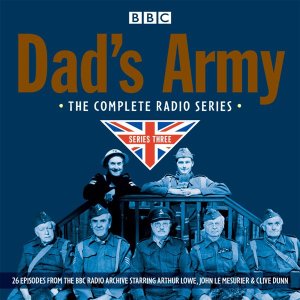 ‘The Godiva Affair’ was the third episode transmitted in Series 3 of the ‘Dad’s Army’ radio series. The radio adaptation of this TV episode is pretty interesting to listen to and very enjoyable at that. I’m not sure if it’s better than its TV counterparts, but it’s one of my favourite episodes from the radio series.

Another notable change is the casting of Larry Martyn as Private Walker. In the TV version, Tafryn Thomas played Private Cheeseman in place of Walker due to James Beck’s tragic death. Thankfully, Cheeseman doesn’t appear in the radio version and Walker is there instead, which I honestly do prefer.

Mrs. Pike doesn’t appear in the radio version of ‘The Godiva Affair’, so no Pearl Hackney to play the character here. I did find Pike saying “Fleshings!” to Mr. Mainwaring a bit out of nowhere since I didn’t register he came in with Jonesy after Mainwaring had his phone conversation with his wife in his office.