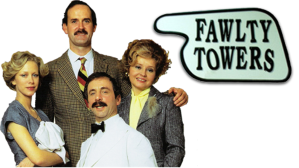 Welcome to the ‘Fawlty Towers’ page on ‘Bradley’s Basement’!

This is a fantastically brilliant and funny comedy TV series by John Cleese and Connie Booth.

‘Fawlty Towers’ is one of my favourite BBC TV comedies in the UK. It brings back cherished memories for me when I first saw it. I did my own version of ‘Fawlty Towers’ with Stephen, my best mate from school, when we were young. This is twelve episodes of superb BBC TV comedy that doesn’t fail! 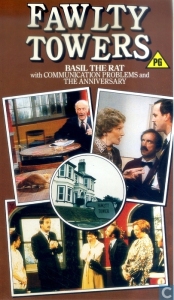 The ‘Fawlty Towers’ DVD box set has been repackaged over the years, most recently in 2010, with remastered episodes. The 2010 DVD is  a 3-disc set with Series 1 on Disc 1, Series 2 on Disc 2 and DVD special features on Disc 3. Here on ‘Bradley’s Basement’, I’ve added my reviews on the twelve episodes of the ‘Fawlty Towers’ TV series. I’ve also added my review on the Specsavers TV advert ‘Fawlty Car’.

‘Fawlty Towers’ is a classic TV comedy series that will be remembered for years to come. It’s also had its own legacy. I attended a special restaurant performance in Cardiff Bay called ‘The Fawlty Towers Dining Experience’ back in September 2015. I’ve also seen ‘Fawlty Towers’ performed on stage in Cardiff close to where I live, which I’ve really enjoyed seeing. ‘Fawlty Towers’ is something to enjoy when going on holiday and/or when staying at a nice hotel.