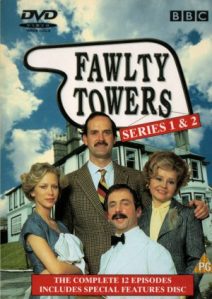 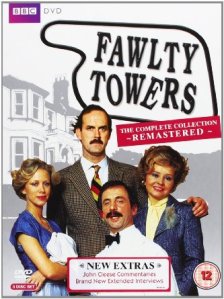 This is one of my favourite ‘Fawlty Towers’ episodes from the series. In this episode, the ‘Fawlty Towers’ cast have a new chef joining them called Kurt. They arrange a special dinner for some very classy guests. But this turns pear-shaped when Kurt the chef gets drunk and they serve duck instead.

When I saw ‘Fawlty Towers’ for the first time on VHS, ‘Gourmet Night’ was the first episode I watched from the series. I loved the comedic moments featured throughout this episode and it was pretty pacey indeed. It was hilarious when Basil had to collect the duck in the car and it gets ‘trodden on’.

Allan Cutherbertson guest starts as Colonel Hall with Ann Way as Mrs. Hall. It was so funny when the Colonel ‘twitched’ a lot in the episode. I also liked the fact that Colonel Hall is a tall man and Mrs. Hall is a small lady. There’s also Richard Cadicot and Betty Huntley-Wright as Mr. and Mrs. Twitchen.

Steve Plytas guest stars as Kurt, the new chef at ‘Fawlty Towers’. He lasts for one episode, as he gets himself drunk after being heartbroken. He loves Manuel, but Manuel doesn’t love him back. There’s also André Maranne as…André, the restaurant owner that recommended Kurt to be the new chef.

The most memorable scene in ‘Gourmet Night’ is when Basil gave his red car a ‘good thrashing’. It was very funny to see that scene when the car won’t work and Basil trashed it with a branch off a tree. Basil treats the car like a person, especially when he hurls abuse at it from outside.

I love watching ‘Gourmet Night’ again and again when I see ‘Fawlty Towers’. This episode has an evening meal feel to it and I like to have an evening meal at a restaurant when I think about this episode. It was funny as Basil presented the duck to the guests and it turned out to be trifle instead.