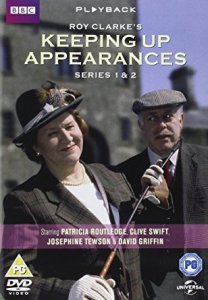 In this episode, Hyacinth has invited the new vicar and his wife to ‘tea and light refreshments’ at her house. But plans go wrong, when Onslow and Daisy turn up in their car to tell Hyacinth that Daddy’s run off with a gypsy. Also, Rose wants to commit suicide and be buried in Mummy’s wedding dress.

I laugh every time when I see Onslow’s battered car arrives outside Hyacinth’s house and it explodes when the car backfires. It’s a running gag during the series and it never bores. It was funny when Onslow met the gypsy at the front door to his house and his reaction to Daisy talks about ‘bad luck’.

Rose soon turns up in black mourning clothes at Hyacinth’s house. It was funny when Hyacinth has phone calls for orders of a Chinese takeaway and she keeps telling them, “No, you cannot…” Hyacinth also is in touch with her son Sheridan who asks for money and seems to be in ‘needlework’.

Jeremy Gittins makes his first appearance as the Vicar in ‘Keeping Up Appearances’ with Marion Barron as the Vicar’s Wife. It was funny when Hyacinth put the teapot in the Vicar’s hand and it was piping hot. Rose manages to seduce the Vicar in this episode, which becomes recurrent in the series.

This second episode of the series was great to watch and very enjoyable, enabling to get to know who the characters were in the series as well as introducing the new vicar and his wife. I was finding Onslow very funny to watch and Geoffrey Hughes delivers a great down-to-earth funny performance.