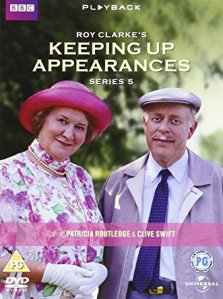 However, this half-hour special was entertaining. It has our main characters take part in an historical pageant organised by Hyacinth. This does have a subtle Christmas feel to it, even though few Christmas references are mentioned. I wonder why this wasn’t a pantomime instead of a pageant. 😐

In the special, Hyacinth organises the pageant based on the English Civil War. They rehearse and perform the pageant at the local church hall. Hyacinth sees herself playing Queen Henrietta Maria and Richard plays Charles I. Hyacinth even has this new mobile phone. It’s a pretty big one for 1995.

But when Hyacinth and Richard turn up at the church hall with Elizabeth and Emmet helping out, they find the volunteers absent. Hyacinth tries contacting her volunteers via her mobile phone. I love Emmet’s reactions to Hyacinth phoning them and they cut off instantly when she announces herself.

Eventually however, Hyacinth rallies round her family, including Onslow, Daisy and Rose, to help her out with the pageant. She also contacts Violet and Bruce to help out. But having Violet and Bruce is a mistake, since they’re constantly arguing with each other when they turn up at the church hall itself.

The episode also features Una Stubbs as Mrs. Moody, a wife of one of Rose’s boyfriends. For me, Una Stubbs was in the ‘Fawlty Towers’ episode ‘The Anniversary’. Mrs. Moody turns up to have a fight with Rose. They keep on bickering, even when Rose and the others are at the church hall itself.

Tony Stuart guest stars as Mr. Crabtree, even though he doesn’t have anything to say, and George Webb guest stars as Daddy. There’s John Evitts as Bruce and Anna Dawson as Violet. There’s also Miranda Kingsley as the shop assistant who attends to Onslow when he’s dressed as a Roundhead. 🙂

Jeremy Gittins and Marion Barron also return as the Vicar and his wife in this special. They turn up at the church hall to see how the pageant is going on. But when they turn up, they see Rose and Mrs. Moody arguing and Daddy and Mr. Crabtree dancing with each other, assuming its part of the play. 🙂

When Hyacinth does something provocative as the Queen (due to Emmet encouraging her), the Vicar objects and demands the play to stop. This results in Hyacinth falling foul of a stage accident and she’s taken into an ambulance. Hyacinth believes she’ll die, despite everybody saying she won’t.

The special ends on that note as well as ending the series on that note too. I enjoyed the Christmas Special very much. It’s not the most spectacular end to ‘Keeping Up Appearances’, but it’s good it ended on a particularly entertaining episode and one which saw all of the characters come together.

‘Keeping Up Appearances’ has been a very enjoyable BBC comedy series for me. I think the first two seasons are the best for me. Sometimes the episodes can feel samey, but they’re light-hearted and gentle entertainment for me. Patricia Routledge is superb as Hyacinth and I like the other characters.