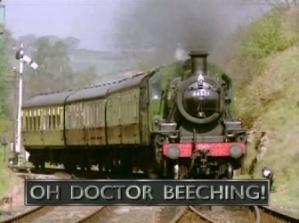 Here’s a list of who’s who in the ‘Oh Doctor Beeching!’ TV series.

Jack is the acting station master before he’s replaced by Parkin and becomes his deputy. Jack deeply loves his wife May and is overly jealous when he suspects men take advantage of her. He was an ex-soldier during the Second World War and got a limp from it in his right leg. He bullies Wilfred, Ethel’s son when they work on the station and isn’t too keen on stationmaster Cecil Parkin bossing around.

Ethel is the ticket clerk in the booking office at the station. Ethel is a scatter-brained person who gets her words mixed up when talking to people and constantly goes “What’s going off?” She has a grown-up son called Wilfred who she mollycoddles and scolds off every time he does something wrong or stupid. She tells Jack off for getting suspicious with May and is his conscience in the series.

Mr Parkin comes to Hatley station as the new station master. Parkin is a posh, youngish man who is very strict on discipline. He’s easily disappointed when his station master’s office is a mess and when people like Jack, Ethel and Harry do bizarre things. Parkin is a perfectionist and seems refined on the surface. It transpires that he and May once had a romantic love affair during the Second World War.

JULIA DEAKIN as May Skinner

May is Jack’s wife and buffet manageress in the refreshment room of Hatley station. May is considered beautiful and easily catches the eye of male admirers, causing Jack to be suspicious. May once had a romantic love affair with Parkin in the war. Despite his attempts to fraternise with her, she resists his advances. May tries to cover up her former affair with Parkin to prevent Jack knowing.

Harry Lambert is my favourite character from ‘Oh Doctor Beeching!’ Harry is a grumpy, old man who is the signalman of Hatley station. Harry is fed up with sitting in his signal box all day long and gets annoyed when the signal goes and ‘another ruddy train’ comes along. Although miserable and grumpy, Harry is on the rebels’ side and doesn’t like Parkin despite sucking to him on some occasion.

Vera is an older woman who is the station’s cleaner. She’s very helpful in getting things tidy at the station and often helps May with the buffet. Vera, like Ethel, is pretty scatter-brained and weird at times. She often talks about her late husband, “He was an engine driver you know.” Vera has this unrequited love for Harry and often gives him lunch and tries to keep him company in his signal box.

The cast also includes Paul Aspen as Wilfred, Ethel’s dopey son; Lindsay Grimshaw as Gloria, Paul and May’s pretty daughter with a love for men and short skirts; Terry John as Percy, the station guard who flirts with every woman he sees; Ivor Roberts as Arnold the train driver and Perry Benson as Ralph, a trainee train driver who’s dim and who Arnold tells him to ‘stop playing with his whistle!’