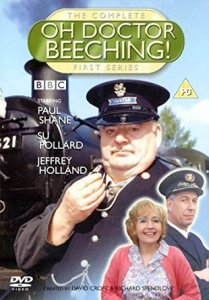 This is the season finale to Series 1 of ‘Oh Doctor Beeching’. I like how this episode ends Series 1 of this quaint comedy series about a railway station, especially since it features a ballroom dance. I like an old-styled ballroom dance that includes Harry Lambert and his Rhythm Rascals. 😀 Such nostalgia!

The episode however begins with a bang as Jack and May’s daughter Gloria and Ethel’s son Wilfred go missing. Gloria is found with Amy after a late night at the cinema. It turns out they spent the night at Mr. Parkin’s house. Apparently it was all Jack’s fault when he locked his daughter out late at night.

I liked that moment when Gloria stands up to Mr. Parkin, calling him ‘pompous’ after he ridicules Jack on his irresponsibility as a parent. Meanwhile, Ethel finds her son Wilfred out working early with Al Hunter Ashton as Tom Samways on his…horse muck round? (That’s the only way I can describe it).

It then transpires that Jack is forced to go through a medical over his suitability for his job at the railway station. This has something to do with his bad leg when he injured it during the war – through a pub brawl I might add. This has all been arranged by Mr. Parkin to get rid of Jack entirely.

It’s clear that Parkin wants Jack out of the way so that he can be with May. Doesn’t he get it that May’s already married? I liked that scene where Ethel sees Parkin in his office and gives him an ‘earful’ on how unkind he is in his treatment for Jack. Parkin is resolute despite Ethel’s protestations.

I wish this episode was long enough to include more ballroom dance scenes since I enjoyed those a lot. Richard Spendlove guest stars as Mr. Orkindale again in this episode, as he comes over to inspect Jack and keep him on at Hatley railway station. Overall, this episode is a very good finale to Series 1.