Welcome to ‘The Brittas Empire’ page on ‘Bradley’s Basement’.

Here’s another one of my favourite BBC TV sitcom show from the 1990s. ‘The Brittas Empire’ stars Chris Barrie as Gordon Brittas. Chris Brittas was also Arnold Rimmer in ‘Red Dwarf’. This is what I remember Chris Barrie most fondly for, playing an odious manager of Whitbury New Town Leisure Centre.

‘The Brittas Empire’ lasted for seven seasons on BBC TV. Mr. Brittas tries his best to fulfil his ‘dream’ of bringing a world of peace and harmony at his leisure centre. But he gets it wrong when he doesn’t understand people and upsets many in the process. Brittas even upsets many of his leisure centre staff.

Tim Bradley with Chris Barrie at the ‘Bournemouth Film & Comic Con’, Weston-supere-Mare, May 2016 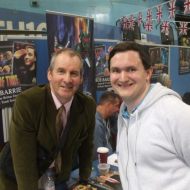 Tim Bradley with Chris Barrie at the ‘Stars of Time Film & Comic Con’, Weston-supere-Mare, May 2016 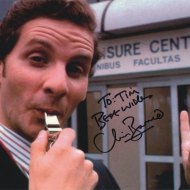 Here’s also a link to a list of who’s who in ‘The Brittas Empire’ TV series.

MY ‘THE BRITTAS EMPIRE’ REVIEWS