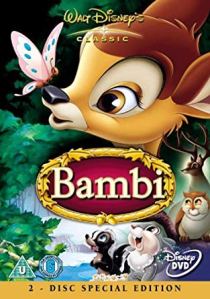 Life In The Forest with Bambi and his Friends

For my sister Bethan

This is a beautifully made Disney film that I loved watching as a kid when I was growing up.

I do recall seeing ‘Bambi’ on VHS when my parents purchased it for us to watch as a family. Now it has been re-released on DVD and Blu-ray in various editions. The DVD edition that my parents and I currently have is the 2-disc Special Edition. This has the film on Disc 1 and special features on Disc 2.

‘Bambi’ is a very special film in the Disney legacy. It was the fifth Disney film made following ‘Snow White and the Seven Dwarfs’, ‘Pinocchio’, ‘Fantasia’ and ‘Dumbo’. ‘Bambi’ wasn’t well-received when it was released at cinemas in 1942. Nowadays, it’s regarded as a Disney classic and rightly so. 🙂

The story focuses on the life of Bambi who grows up from a young deer fawn to a young adult deer. Bambi is the new-born prince of the forest. Through his life, he experiences what the world is like as he interacts with his mother; his friends as well as his father known as the Great Prince of the Forest.

‘Bambi’ is based on the 1923 book called ‘Bambi, A Life in the Woods’ by Felix Salten. I’m not very familiar with that original book; although I’m sure I read a picture book based on it. But Walt Disney and his team made the conscious decision to not follow exactly like the book and loosely base on it.

What I found remarkable about ‘Bambi’ as a Disney film is that it doesn’t heavily rely on dialogue. The characters do speak and there are some amusingly comedic moments. But the film tends to rely on drama and imagery when focusing on life in the forests and the film’s music assists that very well.

As a kid, I was immersed into the world of Bambi, wanting to see what the little deer fawn was up to when interacting with his friends. Bambi is innocent at first when he’s born and when he sees things that he hasn’t encountered before, he’s so intrigued and fascinated by them with child-like wonder.

There’s not exactly a big enemy in this film, although it’s made clear that the enemy to the animals of the forest is ‘man’. The film never shows humankind and it’s pretty scary when we have an unseen enemy. Even for me, I can emphasise with the animals getting afraid of men attacking them.

Bambi of course is the main star of the show. I liked seeing him as a little deer fawn as he grows up. I didn’t like it when he became all grown-up in the film’s second half, but I’ve become appreciative of that aspect of the story nowadays. As a kid, seeing Bambi as a little deer fawn was so exciting for me.

As well as Bambi getting curious about birds and trying to say ‘bird’, it’s also amusing when he gets to learn new things such as butterflies and flowers. He makes friends with Thumper and Flower to help him understand these things and his relationship with his mother was very strong and sweet. 🙂

Speaking about the mother, it’s argued she didn’t provide much to the film as a character. But I would argue she provided the protection of Bambi when he was vulnerable especially when visiting ‘the meadow’ for the first time. She also warns Bambi of the dangers of ‘man’ present in the forest.

But of course, the shocking moment of ‘Bambi’ as a film happens when his mother gets killed by ‘men’. That is something I’m sure would’ve upset kids who watched this film back in 1942. It upset me when I saw Bambi without his mother in that moment as it’s a brave film for a Disney film to do.

Bambi’s friends are other wild animals including Thumper, a pink-nosed rabbit. I love Thumper the rabbit. He’s very funny, especially with his thumping feet and meeting up with Bambi to show new wonders. That scene where Bambi experiences snow for the first time with Thumper was so funny.

I enjoyed it when Bambi and Thumper went on the ice rink together. Bambi has trouble trying to get his four legs onto the ice whilst Thumper laughs amused before trying to help him up. Thumper likes saying that Bambi’s ‘kinda wobbly’ and it was amusing when Thumper got told off by his mama.

Another friend of Bambi’s is Flower the skunk. Although I don’t think that is his real name since Bambi called him ‘Flower’ after he mistook him for one! 😀 Thumper laughs away whilst Flower doesn’t mind being called that. I wonder whether Flower had a mother or a father in the forest here.

It was amusing and interesting to see Flower hibernating when Bambi and Thumper come across him. Flower just seems to be by himself and doesn’t have his family with him. Or maybe he does but they are hidden away in that tree he is in. I wonder how skunks can sleep for long during the winter.

Bambi also meets his childhood friend and sweetheart, Faline, a young female deer. Faline is rather cheeky and giggly when Bambi meets her. Bambi, who has never seen a young female deer like him before, is very afraid of her. It was pretty funny when the two eventually chased each other as kids.

There’s also Bambi’s father, the Great Prince of the Forest. He doesn’t say much when Bambi first sees him in the meadow as a child. He can seem scary but Bambi’s father is a very wise deer and protective of him as well as his mother. He even looks after Bambi after his mother is tragically killed.

In his adult life, Bambi has more scenes with his father especially when they discover that mate has returned to the forest. Bambi’s father encourages him to ‘get up’ after getting shot by ‘man’. Bambi and his father soon run away from the burning forest that makes for a pretty dramatic climax in this.

Another character in this film is Friend Owl. He’s very funny when he tries to get some sleep in his tree hole but gets interrupted. He’s also friendly towards Bambi when seeing him as a newly-born fawn and a young adult deer. Friend Owl does warn Bambi, Thumper and Flower about ‘twitterpating’. 😀

The DVD special features are as follows. On Disc 1, there’s ‘Bambi: Inside Walt’s Story Meetings’ which features dramatised conversations between Walt Disney and the writing team. I was amazed to see Patrick Stewart of ‘Star Trek’ fame give the introduction. There’s also a Disc 2 preview on this.

On Disc 2, there are two deleted scenes never seen in the movie before. There are also ‘Games and Activities’ including ‘The Forest Adventure’, ‘DisneyPedia: Bambi’s Forest Friends’, ‘What’s Your Season?: Personality Profile’; ‘Disney’s Storytime: Thumper Goes Exploring’ and the ‘Virtual Forest’.

There’s also ‘Backstage Disney’ which includes ‘The Making of Bambi: A Prince Is Born’; ‘Restoring Bambi’; ‘The Legacy Continues: A Sneak Peak at the All-New ‘Bambi’ Movie’; ‘Disney Time Capsule: 1942: The Year of Bambi’ and ‘The Art of Bambi’. There’s also an excerpt from ‘Tricks of the Trade’; ‘Inside the Disney Archives’; ‘The Old Mill’ animated short and the original 1942 theatrical trailer.

I love ‘Bambi’ as a Disney film and it means a lot to me watching it as a kid. This film predates what ‘The Lion King’ did later on with its ‘circle of life’. ‘Bambi’ is a similar tale about the ‘circle of life’ except it’s in a forest. And it has a calm beauty and honest about it through its forest imagery and its music.

I like how Bambi’s life from a young deer fawn into a younger adult male gets developed in the film and how he experiences life through his family and friends. It’s a timeless classic that should never be forgotten. I’m very pleased to have seen it again on DVD lately to remember my sister Bethan.