‘Donald’s Snow Fight’ is a Donald Duck cartoon I used to watch every Christmas on VHS as a kid. Now I can watch it on the ‘Countdown To Christmas’ DVD. I hold fond memories of this cartoon from Donald wearing a big overcoat to pulling a sled to having snow fights with Huey, Dewey and Louie.

It is funny how Donald wanted to enjoy the snow outside, singing ‘Jingle Bells’ as he pulled his sled up the hill before he got into mischief with his three nephews Huey, Dewey and Louie. Donald ruins their snowman once he smashes through it with his sled. He laughs away rolling about in the snow.

The three nephews get their own back on Uncle Donald. It’s quacking insane when war breaks out between Donald and his nephews. Donald is on his snowy-built ship whilst Huey, Dewey and Louie are inside their snowy built castle. A siege ensues as the two sides fire snow weapons at each other.

Donald starts with a small barrage of snowballs to make his three nephews end up like bowling pins so that he can strike them with a bowling ball-like snowball. That’s quite funny! 😀 Huey, Dewey and Louie’s are quite violent. They fire a picnic basket with snow chunks containing mouse traps in them! 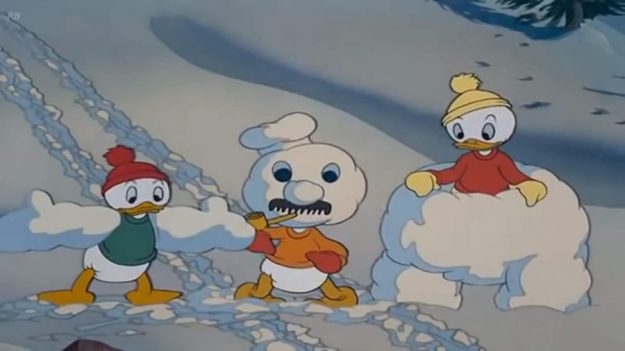 It was grim how it ended with Donald’s ship getting broken apart by snowballs and by snowballs with fire. Just as Donald’s about to ‘exterminate’ his nephews (is he becoming a Dalek? 😀 ), his ship melts apart and he ends up frozen in a palm tree-like prison of ice! I found that quite cruel of his nephews to do.