‘Bongo’ and ‘Mickey and the Beanstalk’

‘Fun and Fancy Free’ is a lovely Disney film that I’ve enjoyed re-watching from my childhood!

It features Mickey Mouse; Donald Duck and Goofy with Jiminy Cricket and contains two stories that can be seen as one. It’s very clever in blending in a mix of live action and animation. I purchased this DVD for my mum and dad’s wedding anniversary in 2014. They enjoyed it too when we saw it again.

What I like about this film is that it’s a film that talks about the meaning of life and what life’s all about. It’s an uplifting; feel-good film that helps to put us out of our misery whenever you think life is not worth living or there is too much trouble in the world and reminds us of how to be optimistic. 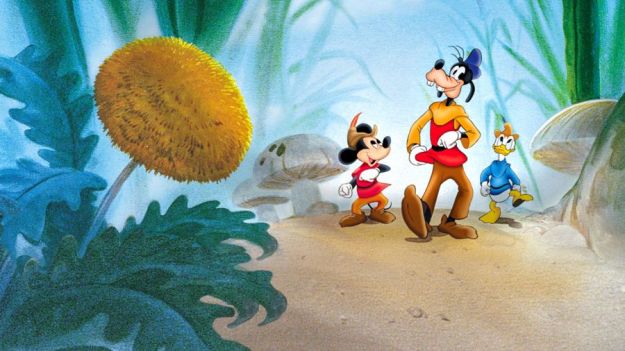 This film was produced by Walt Disney from the aftermath of World War II. It’s fitting that a film as feel-good as this should be released after a period of hardship and suffering. The two stories in the film went through a number of stages before being halted and eventually resurfaced into one film.

‘Bongo’ is a musical light-hearted story that is narrated and sung by Dinah Shore. Now I didn’t know much about this story before, and I didn’t know who Bongo was either. But I enjoyed this little story.

This is a story about ‘three bears’ (no, not the one with Goldilocks). It’s a love story that can be told for anyone who wants to fall in love. The story’s sweet and reassuring with Dinah Shore narrating it.

Bongo is a bear who has lived in the circus all his life and is the star. Everybody loves Bongo with what he can do with his circus tricks. But Bongo is a unhappy since he longs for a life into the wild.

He gets his chance when he manages to escape the train and finds himself in the wild mountains where animals live. This is the life that Bongo wants and he’s happy and liking the idea of settling in.

But life isn’t easy for Bongo as he finds it difficult to live like a bear in the wild. He then discovers a pretty girl bear named Lulubelle, who he falls in love with. It’s lovely when the two bears fall in love.

But the lovey-dovey atmosphere is spoiled as Bongo faces Lumpjaw, a big angry bear who rivals for Lulabelle. Lumpjaw doesn’t like the romance between Bongo and Lulabelle and wants to break it up.

I liked Dinah Shore’s narration and her singing throughout ‘Bongo’. I don’t know much about Dinah Shore as a singer beforehand, but she has a lovely voice and tells the story of ‘Bongo’ so beautifully.

‘Bongo’ is a sweet little story to start the film. It makes for a good first half and is a love story that is to be cherished by everyone in love. But the next time you say ‘I love you’ to someone, give a slap.

‘MICKEY AND THE BEANSTALK’ 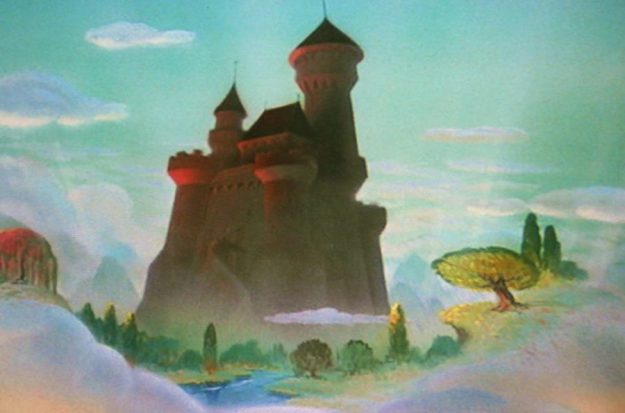 The story gets told at party that Jiminy stumbles upon where the live-action takes place. There’s Edgar Bergen who tells the story, with his two puppet friends Charlie McCarthy and Mortimer Snerd.

Joining Mr. Bergen; Charlie and Mortimer at their party is little child actress Luana Patten, who I saw in ‘Song of the South’. To see Luana in this film was a delight as she gets to interact during the story.

‘Mickey and the Beanstalk’ is set a long, long time ago in a place called Happy Valley where everyone is happy! The land is cast with a magical spell by a singing Golden Harp who lives in a majestic castle.

But soon a terrifying giant steals the Harp from the castle and causes the valley to fall into misery and decay. This also affects Mickey Mouse, Donald Duck and Goofy who live in the valley as farmers.

I liked Mickey Mouse in this story. I had no idea that Walt Disney was the original voice for Mickey in the early days. I like how Mickey leads his friends and that he; Donald and Goofy are the Disney trio.

Donald Duck was funny to watch as well, as he’s ratty and ‘quackers’ as ever. Goofy was pretty good too, as his most memorable moment is when he’s tries to get his hat back over a wobbly pink jelly.

The giant is Willie the Giant, voiced by Billy Gilbert (who I remember from the ‘Laurel & Hardy’ films). Willie sounds terrifying and mean, but he’s a very joyful soul acting like a big kid at his castle.

The DVD special features are as follows. There’s a special documentary called ‘The Story Behind Fun and Fancy Free’ that chronicles the making of this film and the two stories before and after the Second World War with Walt Disney. This was very interesting and intriguing documentary to enjoy.

‘Fun and Fancy Free’ is a lovely little film that features two stories, one with Mickey Mouse, Donald Duck and Goofy that is very exciting. I cherish this special Disney film as it’s something to watch after a hard day to lift your spirits and kids will enjoy this film as it’s timeless with its themes and music.

Don’t be downhearted. Just put a smile on your face and be ‘full of fun and fancy free’!