For Sarah Sutton (Nyssa in ‘Doctor Who’) as this is one of her favourite films.

“In many ways, the work of a critic is easy.”

That’s how Anton Ego began his review in the film. I won’t be writing my review like that, but I hope it will be entertaining and informative as I’ve tried to do for my other reviews. I’m sure you’ll find more positive things by me than negative in this review.

‘Ratatouille’ is a great film! I enjoyed watching this Disney/Pixar movie for Christmas 2013. It’s the eighth Disney/Pixar film made since the first ‘Toy Story’ film. It’s really clever and I have to say is one of the most sophisticated Pixar films made. It’s a comedy that appeals to both children and to adults.

This film was written and directed by Brad Bird, who previously directed ‘The Incredibles’. ‘Ratatouille’ is set in Paris, France. This Disney/Pixar movie feels very French and it makes you want to go to Paris. The film features some human characters in it and it also has some rat characters in it.

The story concerns one rat named Remy. Being a rat means that ‘life is hard’. But Remy has this highly acute sense of smell and he prefers really good food instead of what rats normally eat which is ‘garbage’. Remy knows how to cook and wants to be a French chef in one of France’s restaurants.

Remy is a keen devotee of one of France’s most famous restaurant chefs called Gusteau. He loves reading Gusteau’s cookbook recipes and Remy even speaks to him when he appears as a figment of his imagination. This happens after Remy loses his family of rats and he’s all alone in the city of Paris.

Remy has an older brother named Emile. Emile is a rat who loves eating and he is easily impressed by his younger brother’s sense of smell. He becomes surprised by what Remy can do with his cooking. I love the moments when Remy tries to teach Emile about eating food and he doesn’t get it.

Remy’s dad’s Django is not so easily impressed as Emile is. Remy and his dad don’t see eye to eye. Whilst Remy prefers having good food, Django sees the bad stuff as a necessity. Remy’s dad tells him to stay away from the humans. But Remy finds the humans fascinating, especially with their cooking.

Soon, Remy and his rat family are forced out of the old lady’s house that they’ve been investing in, as the old lady guns them down and out. Remy gets separated from his family down a sewage tunnel and is lost and alone. Soon Remy finds himself on top and he ends up in Paris – the city of romance! 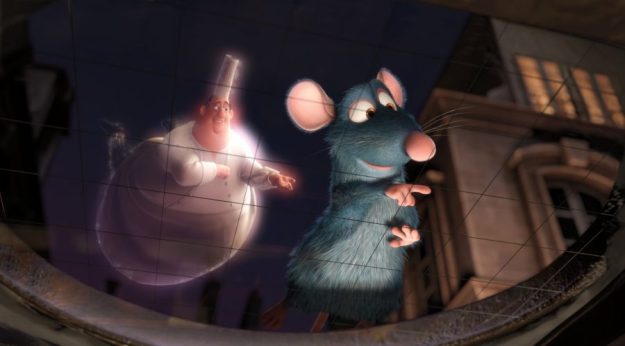 When Remy discovers that a ‘garbage boy’ is messing up with the soup, he becomes horrified and ends up accidentally falling into the kitchen. Remy can’t resist making the soup himself, so he gets to work and a wonderful sequence occurs when he’s adding herbs, vegetables and all sorts in the soup.

Remy has a good time making the soup for the dinner guests, before he gets caught by the garbage boy, who happens to be Linguini. But the soup is loved by a critic when it’s served at the restaurant. The kitchen staff members are very convinced that Linguini made the soup himself instead of Remy.

Although ordered to throw Remy the rat out of the restaurant, Linguni can’t bring himself do it when Remy looks at him with sad eyes through the glass jar. Linguini knows that Remy cooked the soup as he soon realises that Remy can understand what he says by nodding his head. Linguini is astonished.

Linguini knows that he can’t cook but that Remy the rat can, despite being modest. I loved it when Linguini says to Remy, “Look, don’t be so modest! You’re a rat, for Pete’s sake!” He calls Remy his ‘little chef’ and asks him to help him make the soup again. Remy agrees as they work together on it.

It’s discovered that Remy can control Linguini by pulling his hair to move his arms and legs like a puppet. I found this really funny when Remy controls Linguini by his hair strands as they practice cooking. Linguini has to be blindfolded and I laughed when he got it wrong until he soon got it right.

Skinner takes over Gusteau’s restaurant once Gusteau has died. Skinner is a little guy with a manic ego and is pretty hot-tempered. He’s not so impressed by Linguini’s efforts in cooking and he soon suspects that he’s keeping a rat underneath his toque. It seems he’ll do anything to ruin Mr. Linguini.

Colette is the rotisseur, who is in charge of the roasts at Gusteau’s restaurant. She’s also the only female chef working in Gusteau’s kitchen. She’s a tough young lady who is not to be intimidated. Colette teaches Linguini how to cook. The two grow to like each other as they fall in love in the film.

Learning of Linguini’s successes, Anton Ego is determined to come to Gusteau’s restaurant to have some ‘perspective’ and to find out what their food is like now. If he ‘doesn’t love’ the food he’s given, he ‘won’t swallow’. Will Linguini and his ‘little chef’ Remy be able to win the approval of Anton Ego?

The reason why I think that this film works so well is that it focuses on how we as people see food. It encourages us to see food in a new light in terms of the taste and texture and not to take it for granted. For instance, knowing how a loaf of bread is good isn’t by its crust or touch but by its sound.

The film also emphasises how ‘anyone can cook’ as a recurring theme. I’ve cooked my own spaghetti bolognese and watching this film has inspired me to appreciate how good food cooking can be. I have in mind to create my own lasagne someday and even make an omelette. I hope it will be soon.

The DVD special features are as follows. There are two Pixar short films called ‘Lifted’ and ‘Your Friend, The Rat’ with Remy and Emile. There’s a documentary called ‘Fine Food & Film’. There are also some deleted scenes and sneak peaks for other Disney films such as the next Pixar film, ‘Wall-E’.

‘Ratatouille’ is a really great feel-good Disney/Pixar film. It makes me think of it whenever I go to restaurants. It’s become a really popular Pixar film and even though I don’t go for animation films nowadays, ‘Ratatouille’ is one of their finest and greatest. I really enjoyed this! I’m sure you will too!