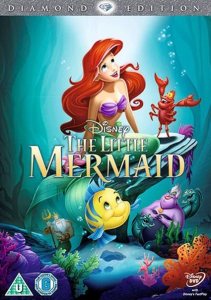 For my sister Bethan

According to my parents, ‘The Little Mermaid’ was my sister Bethan’s favourite Disney film!

This is one of the most well-beloved Disney classics ever made! ‘The Little Mermaid’ was the 28th animated classic in the Disney run and was released at cinemas in 1989. Yikes, that was the year I was born! I wouldn’t have been able to see the movie when released at cinemas or be interested. 😀

Apparently ‘The Little Mermaid’ was the first film of what was considered to be the Disney Renaissance from 1989 to 1999. A number of critically and commercially successful animated films were made during that period including ‘The Little Mermaid’, ‘Aladdin’, ‘The Lion King’, ‘Tarzan’; etc. 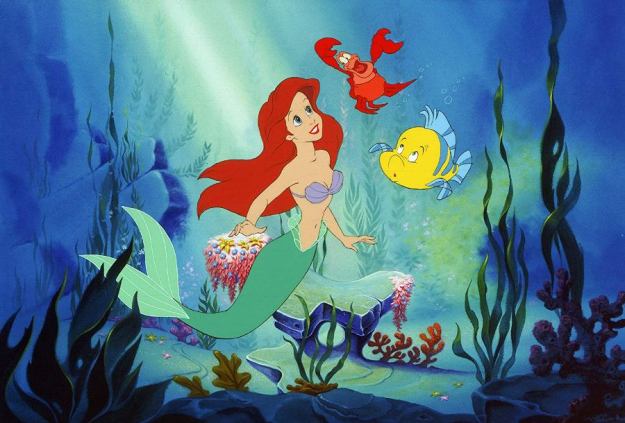 I was lucky to be a part of that era, seeing ‘The Lion King’ and ‘Tarzan’ at the cinema. Beforehand, Disney hadn’t been doing so well with animated films. But in the time of their renaissance, films were made in the way Walt Disney made them by mostly basing them on well-known classic stories.

‘The Little Mermaid’ has had a legacy of its own since the film was made in 1989. As well as getting a sequel and a prequel, ‘The Little Mermaid’ also had its own TV show with stories set prior to the events of this film which I have seen. At the time of this review, a live-action remake is getting made.

My parents and I saw ‘The Little Mermaid’ on Disney DVD in its Diamond Edition set and with a FastPlay option. I’m sure ‘The Little Mermaid’ has had many DVD/Blu-ray releases over the years. It has been re-released at cinemas in the UK for a limited time including a ‘Sing-a-Long’ to go with it and enjoy. 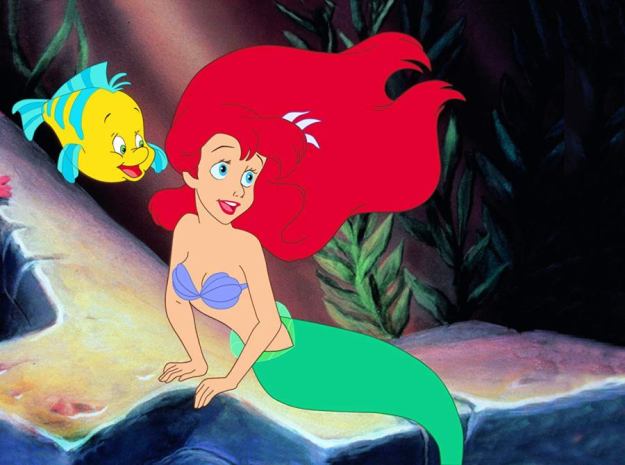 As I indicated, ‘The Little Mermaid’ was based on the original fairy tale by Danish author, Hans Christian Andersen. He was the same author who did classics like ‘The Ugly Duckling’ and ‘Thumbelina’. I’ve never read the original ‘Little Mermaid’ since it’s the Disney one I’m familiar with.

The story of ‘The Little Mermaid’ in the Disney film is about a free-spirited 16-year-old mermaid princess called Ariel. With her fish friend, Flounder, Ariel longs to be a part of the human world. But this is forbidden by her father, King Triton, who is the ruler of the underwater kingdom of Atlantica.

After rescuing and falling in love with a handsome prince called Eric, Ariel soon gets her wish granted when she makes a deal with the sea-witch, Ursula. In order to fulfil her dreams of being human, Ariel has to have true love’s first kiss from Eric in three days before she changes back to a mermaid again. 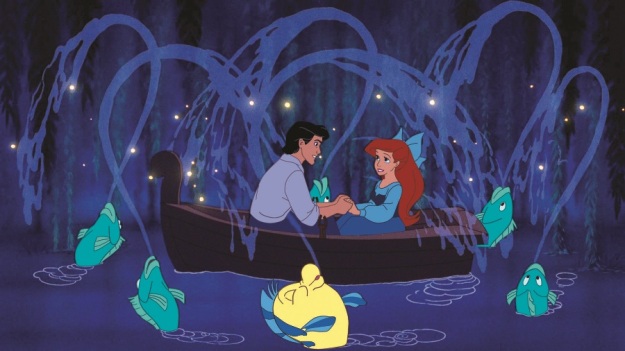 She also gives up her voice to Ursula as a payment. Therefore she can’t speak when she’s with Eric. With the help of her friends Flounder, the crab Sebastian and the seagull Scuttle, Ariel must make it work for Eric to fall in love and kiss her. Can Ariel achieve all this before the sun sets on the last day?

The thing that stood out for me about this film is how amazingly sloppy it all is. I don’t mean to sound mean about it as it is a very sweet story about a beautiful mermaid princess with a lovely singing voice who wants to be human and fall in love with the prince of her dreams, which she does.

But it doesn’t reflect how real life works. For one thing, it’s love on first sight. Second, the two only know each other and fall in love for a short time especially in the three days Ariel gets to be human and receive her first love’s kiss from Eric. I don’t think many situations like that work so successfully. 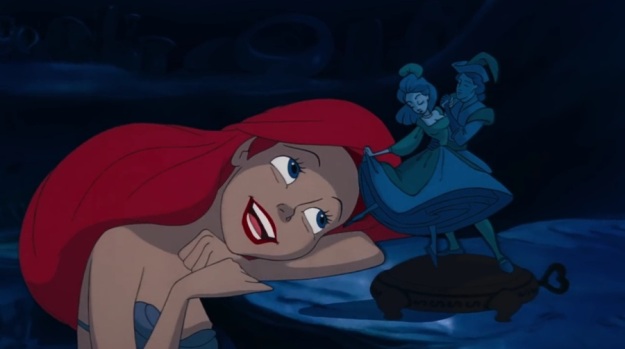 Mind you, I suppose from Ariel’s point-of-view as a mermaid it could be a different thing as it might be that romantic instinct in her to fall in love with a handsome stranger. Or it could be that she’s sixteen years old and that falling in love is easy for her. But it seems like she wins Eric too easily here.

With that said, it is a kids’ film and I can appreciate it for the lovey-dovey sloppy approach it tries to take. And it’s done in a way that you can appreciate the characters and want them to fall in love by the end of the film. I felt like that when I saw the film as a kid and I still do watching it as a grown-up.

The film is well-renowned for featuring some of the finest music and songs composed by Alan Menken. There are songs like ‘Part of Your World’; ‘Under the Sea’ and ‘Kiss the Girl’ that I recall enjoying when I watched the Disney ‘Sing-a-Long’ VHSs I used to have as a kid. Recall those VHSs? 😀 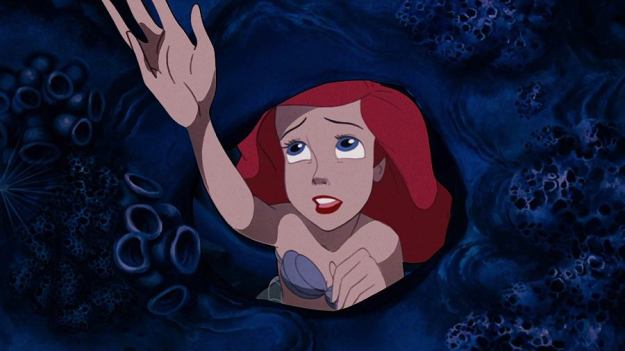 Jodi Benson, who voices Ariel, is well-known and well-loved for her starring role of ‘The Little Mermaid’. Her singing voice for Ariel shines throughout the film, especially when she sings ‘Part of Your World’ as it has gained critical acclaim as well as being one of the best Disney songs ever made.

My favourite song of the movie has to be ‘Under The Sea’ which is performed by Samuel E. Wright as Sebastian the crab. I recall enjoying that song very much on the Disney ‘Sing-a-Long’ VHS release for ‘The Little Mermaid’. They even played the song at the end credits of the film. It’s got to be the best one! 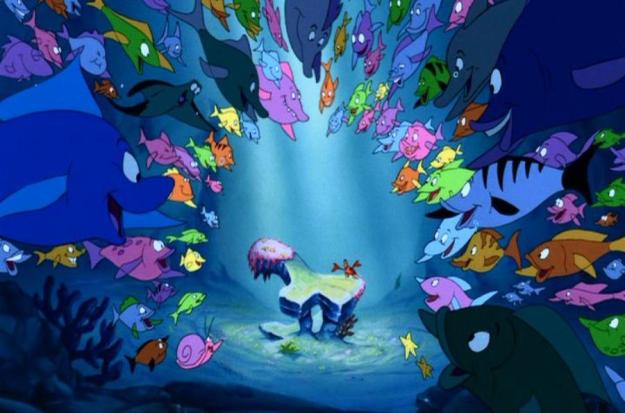 The action-packed sequences in the film including Prince Eric’s ship caught in a storm and Ariel rescuing her was very compelling to watch. Even the climax where the evil Ursula, who wants revenge on King Triton, was pretty tense and compelling to watch as Eric used a ship to strike at her.

Most of the animation is pretty good for a Disney cartoon film. Apart from Ariel and Eric, there are some cartoonish characters, especially with Sebastian who becomes shocked about Ariel falling in love with Eric. There are even scenes where Sebastian is in Chef Louis’ kitchen that’s very cartoonish.

And yes! Chef Louis has got to be one of the most cartoonish characters in the film, chasing after Sebastian to cook in his kitchen. And Chef Louis…is voiced by René Auberjonois?! Like…that René Auberjonois who played Odo in ‘Star Trek: Deep Space Nine’?! I’ve even met the actor in real life! 😀

I couldn’t recognise René Auberjonois’ voice through Chef Louis. He sounds so different compared to when he played Odo in ‘Deep Space Nine’. I don’t think I’d be able to register that it was René Auberjonois doing the voice of Chef Louis without knowing, unless I watched an interview with him. 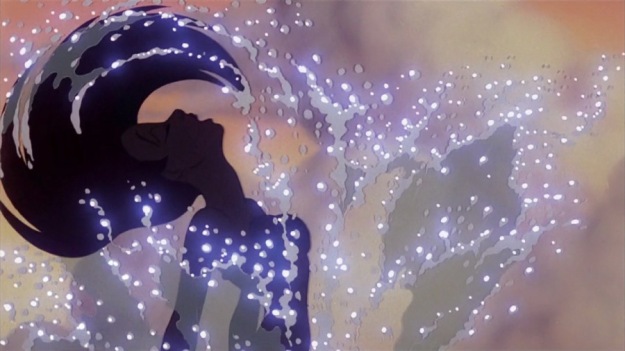 As I said, ‘The Little Mermaid’ Diamond Edition DVD that my parents and I currently have comes with a Disney’s FastPlay option where you watch the film in one go with the DVD special features after it. The DVD special features include ‘Part of Her World: Jodi Benson’s Voyage To New Fantasyland’ and two classic deleted scenes including an alternative version of ‘Fathoms Below’ and the ‘Fight With Ursula’ alternative ending.

On Blu-ray releases for ‘The Little Mermaid’, the ‘Part of Her World: Jodi Benson’s Voyage To New Fantasyland’ feature and the two classic deleted scenes can be found on there. There are also the special features ‘@DisneyAnimation’; ‘Under the Scene’; ‘Howard’s Lecture’; ‘Deleted Character: Harold The Merman’; the ‘Crab-E-Oke Sing-a-Long’ and a music video of ‘Part of Your World’ performed by Carly Rae Jepsen. There’s also a commentary with director/writers Ron Clements and John Musker as well as composer Alan Menken. There are more deleted scenes and ‘Backstage Disney’ which includes ‘The Little Match Girl’; ‘The Making of The Little Mermaid’; ‘The Story Behind The Story’; ‘Storm Warning: Special Effects Unit’; an early presentation reel of ‘Under the Sea’; ‘John & Ron Make Caricatures of Each Other’; ‘Animators Comment on their Characters’; ‘The Little Mermaid Handshake’ and the original theatrical trailer. There’s also ‘Music & More’ with on-screen lyrics for four of the songs and a music video of ‘Kiss the Girl’ by Ashley Tisdale; ‘Disneypedia: Life Under the Sea’; ‘Behind the Ride that Almost Was’ and the ‘Under the Sea Adventure’. 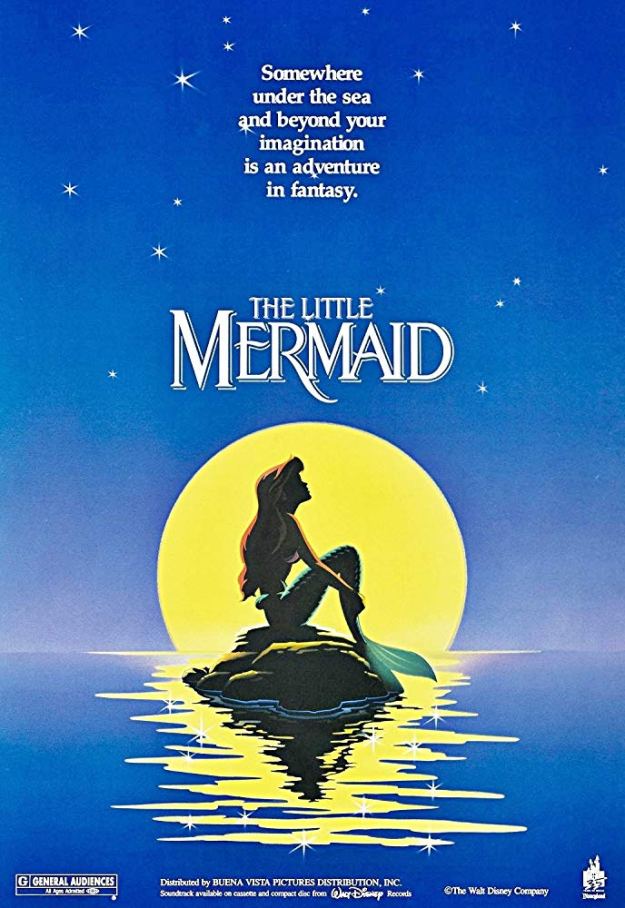 ‘The Little Mermaid’ is a heart-warming animated Disney film that has a sloppy love story in it. But it’s so irresistible to enjoy and love watching. I like the story of a mermaid who wants to become human and fall in love with the man of her dreams and it’s done lovingly well in the storytelling and the animation.

The music and the characters are all very enjoyable to watch and the storytelling is so compelling. I’m glad I saw this when I was a kid and was able to enjoy it again as a grown-up. It was nice to watch it years later and see how it stands up so well. I’m also pleased it was my sister Bethan’s favourite film.