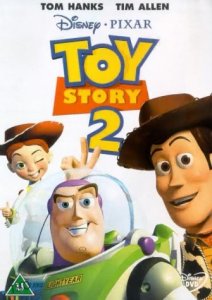 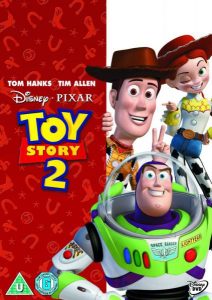 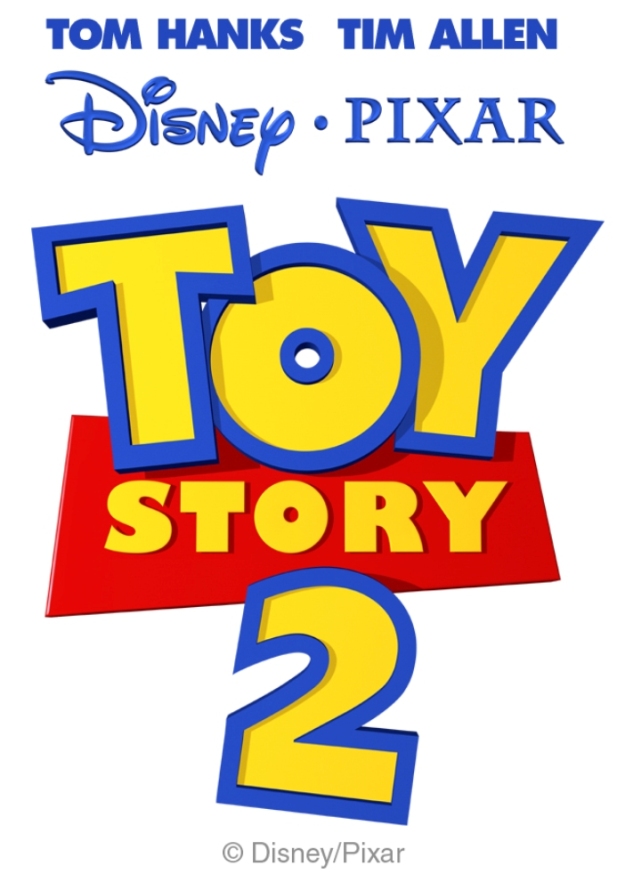 I loved seeing this ‘Toy Story’ movie at the cinema back in 2000!

‘Toy Story 2’ is my favourite movie out of the entire trilogy of ‘Toy Story’ films to date!  It’s the funniest and the best ‘Toy Story’ film, featuring Woody and Buzz Lightyear with the old gang as well as some new endearing characters. It also has a fantastic storyline that I was very captivated by.

The movie has Woody toynapped by a toy collector called Al, who runs ‘Al’s Toy Barn’. Buzz, Mr. Potato Head, Hamm, Rex and Slinky Dog go off to rescue Woody. Meanwhile Woody meets up with his roundup gang that include Jessie the cowgirl; Bullseye his horse and Stinky Pete the prospector. 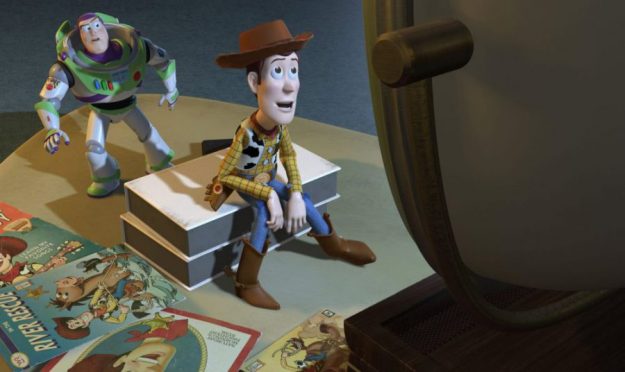 Tom Hanks and Tim Allen return to provide the voices of Woody and Buzz Lightyear in ‘Toy Story 2’. Both actors provide superb voices for Woody and Buzz and they’re so easy to identity with whenever I see Tom and Tim in various movies. I liked the friendship between Woody and Buzz that’s touched upon.

I saw ‘Toy Story 2’ when I was about 10 years old in February 2000 and was in my last year of primary school. I’d seen ‘A Bug’s Life’ in the interim after the first ‘Toy Story’ movie. But I was pleased to hear that ‘Toy Story 2’ was going to be at the cinemas. I couldn’t wait to see it on the big screen.

I love the opening scene of ‘Toy Story 2’. The film opens with an action scene of Buzz Lightyear flying to Zurg’s Planet and fighting him. I couldn’t help think of ‘Power Rangers’ and ‘Beast Wars’ when I saw that scene and was so excited by it. In the end, it all turns out to be a video game played by Rex.

I recall I was still into toys at the time when I saw this movie. I admit I wasn’t into ‘Thomas the Tank Engine’ by that stage, but I was still into ‘Power Rangers’ and ‘Beast Wars’. I remember getting an action figure of Zurg from ‘Toy Story 2’ to play with. Sometimes I feel the films reflect on me as a kid.

I also recall vividly seeing ‘Toy Story 2’ at my local cinema (which is sadly gone now and turned into a bunch of flats). It was me and my Mum who went to see ‘Toy Story 2’. I recall getting a kid’s book of ‘Toy Story 2’, so I was already aware of what the story was about before I saw the film at the cinema.

At around Christmas time, my parents purchased the VHS of ‘Toy Story 2’ for us to watch as a family. I remember seeing ‘Toy Story 2’ over and over again and I enjoyed both the film and the hilarious outtakes. Later in 2001, I had the original DVD box set of the first two ‘Toy Story’ films for Christmas.

Thankfully my parents didn’t have to go Arnold Scwarzengger again and get me another Buzz Lightyear action figure for Christmas. I remember that there was a Buzz Lightyear video game at the time of ‘Toy Story 2’ called ‘Toy Story 2: Buzz Lightyear to the Rescue’. I wish I could have played that game! 😀

In the film, Woody gets his arm broken by Andy whilst being played with. Andy goes off to cowboy camp, leaving Woody behind. After rescuing Wheezy, an old toy penguin from a yard sale, Woody gets toynapped. It turns out that he is a rare Sheriff Woody doll and he is to be sold to a Tokyo museum.

I loved Woody’s story in ‘Toy Story 2’. Woody discovers that he had a commercial success he didn’t know about when he was in ‘Woody’s Roundup’, an American 50s kids’ TV show. When with Jessie, Bullseye and the Prospector, Woody has to make a hard choice to stay or go back to his owner Andy.

Buzz Lightyear comes across as being very heroic and a best friend to Woody. Seeing Woody get toynapped, Buzz leads the toys to rescue him. It’s clear how Buzz values his friendship with Woody. It gets funny when there are two Buzz Lightyears and one unsurprisingly believes he is the real one.

Jessie the cowgirl (voiced by Joan Cusack) is like the third new main star of ‘Toy Story 2’. Jessie is very cowgirl and over-the-moon when she sees Woody. She gets upset when Woody announces his intentions to leave. It turns out that Jessie once had an owner called Emily before she got abandoned by her.

I love the scenes when Woody is with his roundup gang including Jessie, Bullseye and Stinky Pete (voiced by Kelsey Grammer from ‘Cheers’). Bullseye is a silent but loyal horse to Woody. Stinky Pete (or I should say The Prospector) has darker reasons for Woody to stay with them to go off to Tokyo.

I enjoyed the story for Rex when he’s trying to beat Zurg in a video game and he actually defeats Zurg in real-life when off to rescue Woody. I loved the introduction of Mrs. Potato Head with Mr. Potato Head in this movie. They clearly love each other and they’re also both ‘made’ for each other.

It was good to see Hamm again in this movie and I enjoyed more of his wise-cracking remarks in this movie. My favourite is when he’s about to do ‘pork chop’ to Stinky Pete. I equally liked Slinky Dog who’s as loyal as ever. I truly loved it when the toys crossed the road in traffic cones to ‘Al’s Toy Barn’. 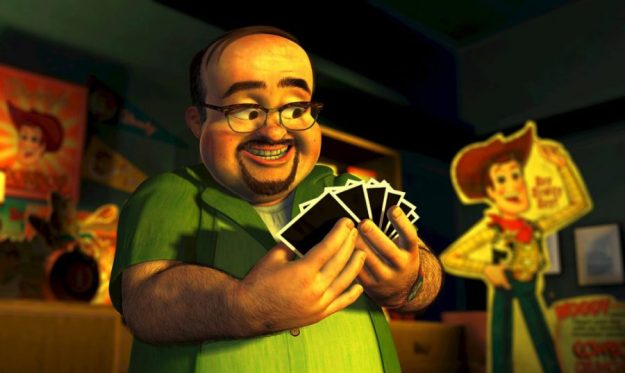 This leads me on to talk about Al, the toy collector (voiced by Wayne Knight) that steals Woody. Al is very funny, as he’s truly selfish and greedy when he wants to sell Woody and his roundup gang to Tokyo in Japan. He’s also very disgusting when he’s eating cheese puffs and he burps in Woody’ face.

My favourite scene in ‘Toy Story 2’ is the fight between Buzz Lightyear (the deluded one) and Zurg on the elevator as they go down. I had ‘Power Rangers’ and ‘Beast Wars’ in my mind when I saw that scene. There was also a funny ‘Star Wars’ in-joke reference when Zurg is Buzz’s father. NO!!!!!!!!!!!!!!

Three green little alien dudes from ‘Pizza Planet’ also make an appearance in this movie. This is when Buzz and the others rescue Woody by driving a ‘Pizza Planet’ van to the airport. Mr. Potato Head manages to save the three alien dudes at one point. They are ‘eternally grateful’ to which he regrets.

To my irritation, Barbie (voiced by Jodi Benson) makes an appearance. She becomes the ‘Toy Story’ characters’ guide tour when they’re looking for Woody in ‘Al’s Toy Barn’. Sometimes I found Barbie annoying when I saw her, especially when she was saying “Bye, bye!” a lot at the end of those outtakes.

I loved those climatic scenes at the airport when Buzz and the others rescue Woody among the baggage handling system. They manage to save Woody just in time from Stinky Pete who’s about to tear him to shreds. But Woody has to rescue Jessie who is on her way to be put on board the plane.

I loved it when Woody and Buzz ride on Bullseye to rescue Jessie. It was exciting when Woody manages to save Jessie and persuades her to come with him back to Andy’s, as they escape the plane. It’s very tense when they’re trying to get out of the plane, but Woody manages to find a way. 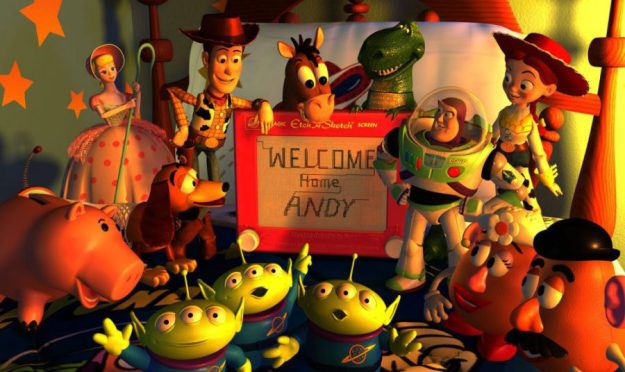 The last scene where Andy returns home and finds new toys to play with in Jessie and Bullseye was lovely to see. It was good to have all the toys reunited, including Buzz falling for Jessie; the three green alien dudes getting adopted by the Potato Heads and Wheezy the toy penguin singing a song.

The songs and music are brilliant in ‘Toy Story 2’, composed again by Randy Newman. There’s ‘Woody’s Roundup’ performed by Riders in the Sky; ‘When She Loved Me’ performed by Sarah McLachlan and a new jazzy version of ‘You Got a Friend In Me’, that is performed by Robert Goulet.

The original DVD special features of ‘Toy Story 2’ are as follows. On the disc, there’s the first Pixar short called ‘Luxo Junior’; a sneak preview of ‘Monster’s Inc.’; the outtakes and three behind-the-scenes featurettes with cast and crew interviews including on characters; music and the coolest toy.

‘Toy Story 2’ has been repackaged and re-released on DVD and Blu-ray, lately in a 2-disc special edition DVD/Blu-ray in 2010. It has some new special features on it and it can now be enjoyed for all. 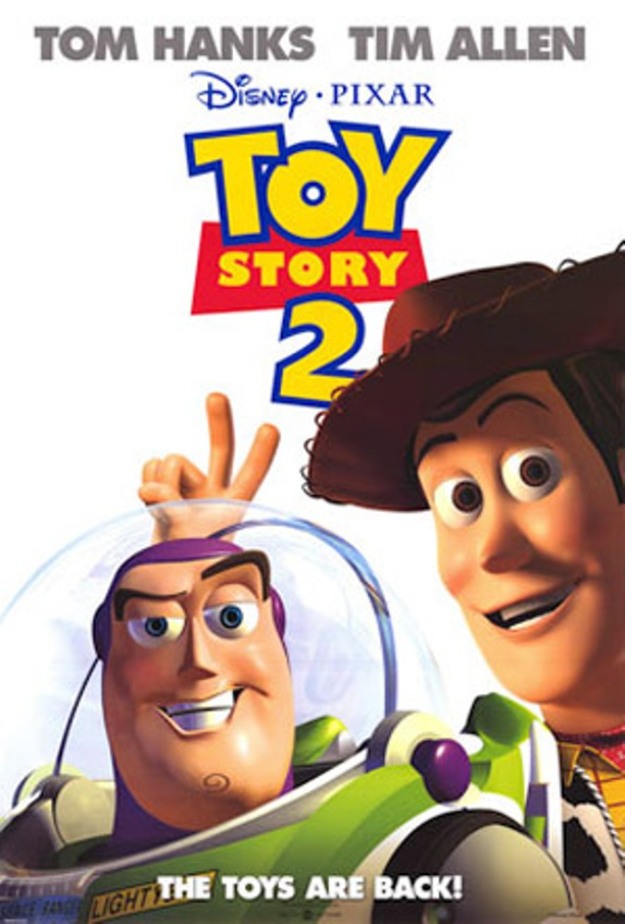 ‘Toy Story 2’ is definitely the best and my favourite out of the ‘Toy Story’ movies. The story and humour of this movie are both very good. I get a thrill of seeing this movie every time I see it. It’s clearly popular being shown at around Christmas time on BBC TV and that’s hardly a surprise to me!

Very soon, I grew out of playing toys during my teens. But I still love the ‘Toy Story’ movies whenever I watch them. I didn’t think there was going to be a third film ever made. Imagine my surprise when I discovered that a ‘Toy Story 3’ was to be shown at cinemas in the summer of 2010.