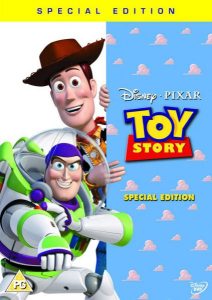 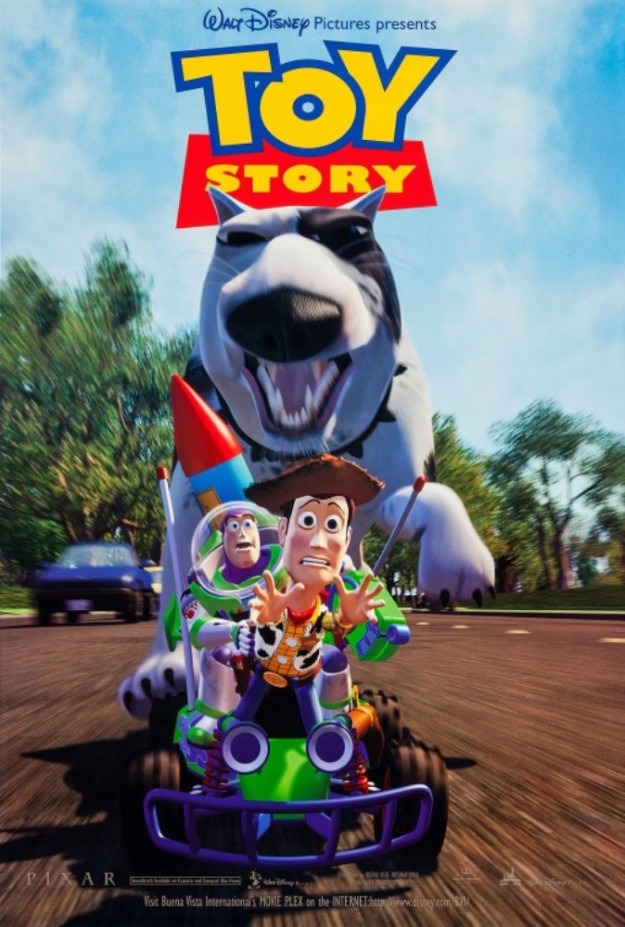 This Disney/Pixar movie is one of my fondest childhood memories as a kid in 1995!

‘Toy Story’ was the first and is still the best computer-animated film made by Disney/Pixar! I was five/six years old when I saw ‘Toy Story’ as a kid in 1995! I love everything about this movie that tells the story of toys coming to life and wanting to be played with. It became an amazing success indeed!

The movie is about young boy Andy who plays with his toys in his bedroom. They come to life when he’s out of the room. Woody the cowboy is Andy’s favourite toy. But on his birthday, Andy gets a new toy in the form of space ranger Buzz Lightyear. Soon there is rivalry between Buzz and Woody. 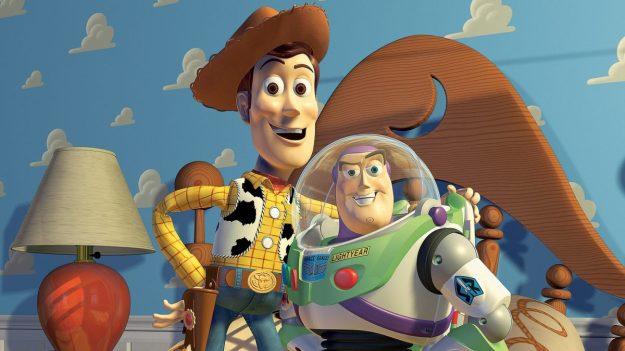 ‘Toy Story’ features the voices of Tom Hanks as Woody the cowboy and Tim Allen as Buzz Lightyear the space ranger. Woody and Buzz are what make this movie, as the story focuses on them as toys. Woody tries seek attention from Andy whilst he’s playing Buzz and it gets them lost out in the world.

‘Toy Story’ was a movie experience I’d never seen before as a five/six year old. I’d seen plenty of cartoon-animated 2D films by Disney, but I’d never seen a computer-animated 3D film before. It was quite scary and exciting to see the trailers for the film and I was so glad to actually see at the cinema.

I loved the opening scene of ‘Toy Story’. Andy plays with his toys by making Mr. Potato Head the villain as One-Eyed Bart. Woody comes to save the day by rescuing Bo Peep and her sheep and having his dinosaur Rex eat force-field dog Slinky. Bart is sent to jail in Andy’s sister Molly’s baby cot. 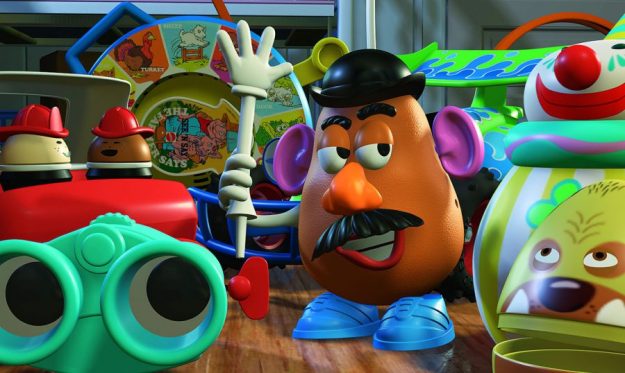 I remember when I was young and wanting to play toys. As well as playing with Buzz Lightyear, I also played with toys from the ‘Power Rangers’ and ‘Beast Wars’ TV shows. I loved playing with Zords; Maximals and Predacons. I also loved playing with the ‘Thomas the Tank Engine’ toys that I collected.

I enjoyed seeing ‘Toy Story’ as a kid at the cinema with my Dad when we went to see it. I remember going to McDonald’s; having Happy Meals and collecting the toys given with them of the ‘Toy Story’ characters including Woody, Buzz Lightyear; Hamm and Rex. It was a brilliant time for me back then.

Later that year, I remember my parents getting the VHS of ‘Toy Story’ for us to watch as a family. We must have watched ‘Toy Story’ lots of times, even when I was kid seeing it on VHS. Years later, in the advent of DVD in 2001, I had the original DVD box set of the first two ‘Toy Story’ films for Christmas. 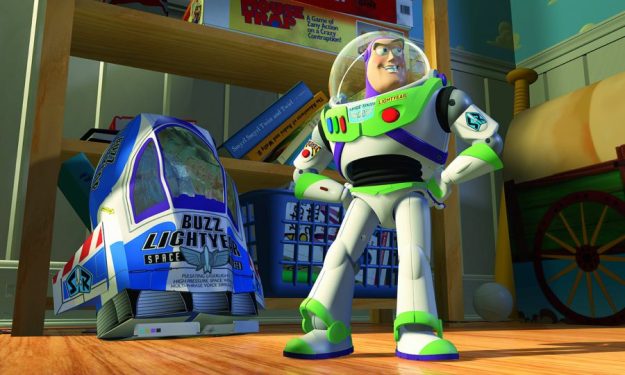 I also had a Buzz Lightyear action figure toy for Christmas by my parents. It was the best Christmas present I had. My parents ended up being Arnold Schwarzenegger in ‘Jingle All The Way’ as they got the present on Christmas Eve at the last minute. I had no idea I put them through all that trouble. 😀

In the film, Buzz believes that he’s a real space ranger and not a toy. Woody tries to convince Buzz that he is a toy, especially when they get lost out at Pizza Planet and before they get taken by Andy’s disruptive neighbour, Sid, who is a menacing kid that tortures toys just for fun. Will they escape Sid?

Woody is the main hero of ‘Toy Story’. He’s a cowboy toy with a pull string, that when you pull it he talks back to you with phrases such as ‘Reach for the sky!’ and ‘There’s a snake in my boot!’ Woody is rather an old fashioned cowboy toy, but Andy loves him. But will he still love him when he has Buzz?

Buzz Lightyear is one of my favourite toy characters in ‘Toy Story’. Buzz is a cool toy with amazing accessories such as having a laser that lights up; voice buttons that go ‘Buzz Lightyear to the rescue’ and has ‘impressive wing span’. When Buzz presses a red button on his chest, wings come from his back.

I loved that scene when Buzz shows off how he can fly ‘with his eyes closed’. He says his famous catchphrase ‘To infinity and beyond!’, before he takes off in ‘flight’ around the Andy’s bedroom. It does seem he’s flying in the scene, but Woody says, “That wasn’t flying, that was falling with style!”

The rivalry between Woody and Buzz is very enjoyable. During the film, when they get lost from Andy and up in Sid’s house, the two grow to become friends. Woody doesn’t like Buzz first, but eventually there’s a lovely scene where he persuades him not to think like a space ranger but a toy.

So who else is in this ‘Toy Story’ film with Woody and Buzz? Well, there’s also Rex the green dinosaur (voiced by Wallace Shawn); Mr. Potato Head (voiced by Don Rickles); Hamm the piggy bank (voiced by John Ratzenberger); Slinky Dog (voiced by Jim Varney) and also Bo Peep (voiced by Annie Potts).

Rex is very funny, as he’s a dinosaur who’s pathetic. He tries to be scary when he roars but can’t. Mr. Potato Head is also funny, as he’s a toy with detachable parts that fall off his face every time he’s being played around by Andy or he’s pushed one side. He’s also very critical of Woody’s leadership.

I equally enjoyed Hamm, who is like a best buddy for Mr. Potato Head in the movie. Hamm comes up with some wise-cracking remarks and it’s not surprising since he’s voiced by someone from the American sitcom called ‘Cheers’. I also like Slinky Dog, who is a loyal friend to Woody and Bo Peep who is like Woody’s love interest.

The villain is of course young Sid Phillips, Andy’s disruptive neighbour. Sid is a menace to toys as he takes pleasure in blowing them in the back garden at his home. Woody and Buzz are in danger when they’re with Sid. Even Buzz gets to have ‘THE BIG ONE’ explosive rocket taped on his back for ‘lift-off’.

Sid also has a ferocious dog called Scud as his pet. Scud is equally menacing as Sid, and he makes life difficult for Woody and Buzz when they try to escape. I enjoyed it when Woody utilises the help of Sid’s toys to help escape from Sid’s bedroom in order to rescue Buzz and how they distracted Scud.

Sid’s toys are very creepy to look at when you first see them. One of Sid’s toys that stuck in my mind is a scary fuzor of a baby’s head on a spider. But it turns out that Sid’s toys aren’t cannibals as Woody and Buzz first believed them to be. They’re actually friendly and they soon help Woody to save Buzz.

I must say, I loved the Pizza Planet scenes when Woody and Buzz go there. Pizza Planet is a pizza restaurant for kids where they have pizza as well as play in the amusement park area. Pizza Planet puts me in mind of places like McDonald’s and Domino’s Pizza, which is very suitable for this movie.

At Pizza Planet, there’s a rocket crane game where Buzz gets inside it and meets some weird little green aliens. They get chosen by ‘the claw’ who takes them one by one to a new home. The little green aliens are amusing with their strange voices and it was funny when Buzz gets to meet them all.

I loved the climatic chase scenes at the end of the movie when Woody and Buzz try to get to the delivery truck with Andy’s toys inside, since Andy and his family are moving to a new house. They get chased by Scud the dog. I also love it when Woody controls RC the racing car in order to rescue Buzz. 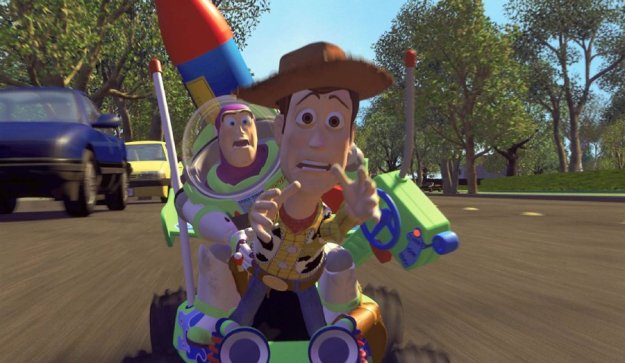 It got tense when Woody lit Buzz’s ‘THE BIG ONE’ rocket on his back and it goes off, taking them really fast to the delivery truck. They soon end up going up into the sky, about to blow up, before Buzz activates his wings, releasing himself from the rocket. They soon end up ‘flying’ or ‘falling with style’.

I loved that moment when Woody and Buzz end up with Andy in the car, on their way to their new house. It was a heart-warming moment, and I loved it that Andy was pleased to have Woody and Buzz back since he missed them when they got lost out there and ended up with Sid the whole time.

I love the music and the songs composed by Randy Newman in this film. The signature song of ‘Toy Story’ is ‘You’ve Got a Friend in Me!’ It became a classic hit in the ‘Toy Story’ film series. I also loved ‘Strange Things’ and ‘I Will Go Sailing No More’. All three songs are performed by Randy Newman.

The original DVD special features of ‘Toy Story’ are as follows. On the disc, there’s a Pixar short called ‘Tin Toy’ that inspired ‘Toy Story’, a sneak preview of ‘Monster’s Inc.’ and ‘The Making of ‘Toy Story” documentary, featuring some behind-the-scenes interviews with Tom Hanks and Tim Allen.

‘Toy Story’ has been repackaged and re-released on DVD and Blu-ray, lately in a 2-disc special edition DVD/Blu-ray in 2010. It has some new special features on it and it can now be enjoyed for all ages.

‘Toy Story’ is one of my fondest memories as a kid in 1995. It’s a film that can be seen for all ages and I enjoyed seeing it at the cinemas and playing with the toys I got from it from McDonalds and over Christmas times. It is certainly a film to watch for Christmas, especially if you’re so fond of toys.