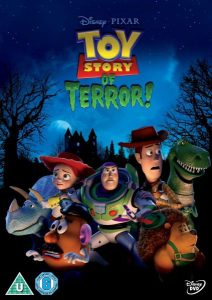 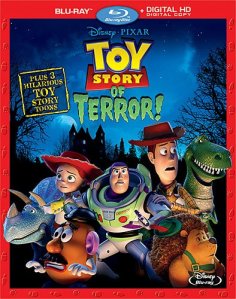 This is the first of two special ‘Toy Story’ short films!

Out of these two short films, ‘Toy Story of Terror’ is my favourite. I’m so pleased that ‘Toy Story’ has continued after ‘Toy Story 3’. With the promise of ‘Toy Story 4’ coming to cinemas in 2019, it was nice to see in the interim what this new era of ‘Toy Story’ is like for Woody, Buzz and the other toys. 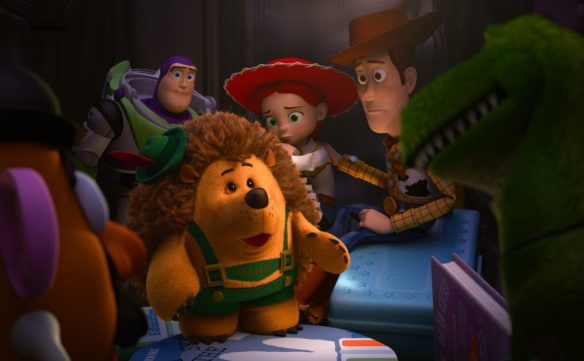 In the story, Bonnie and her mom are on a road trip to visit grandmother. On the way, the car breaks down and they stop at a roadside motel. During the night, the toys explore the ‘Sleep Well Motel’ until they get picked off one by one. Could this be the makings of a terrifying horror movie in this?!

The toys that feature in this ‘Toy Story’ short film are Woody, Buzz Lightyear, Jessie; Rex the dinosaur; Mr. Potato Head; Mr. Pricklepants and Trixie the triceratops. For a short film like this, not all the ‘Toy Story’ characters make an appearance and it’s interesting how Bonnie chooses her toys on the trip.

I was pleased to hear the voices of Tom Hanks and Tim Allen as their characters of Woody and Buzz as well as Joan Cusack; Wallace Shawn; Don Rickles; Timothy Dalton and Kristen Schaal. It makes these special short films part of the continuity of ‘Toy Story’ and reassuring that they’re not spin-offs. 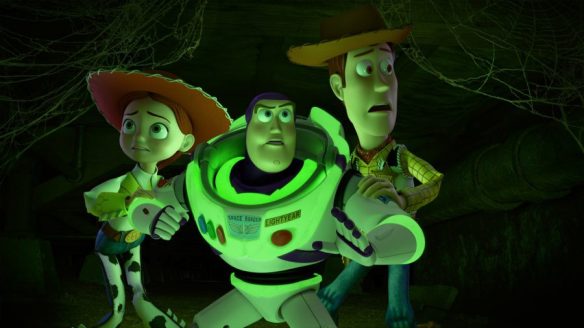 I liked that opening scene where the toys are in the boot of the car, watching a DVD of a black-and-white horror movie where Betsy is being chased by a vampire. It adds to the horror movie atmosphere of this story and helps sets up the characters from where they start to where they end.

Most of the film takes place from Jessie’s point of view, as this is more or less her story. Jessie experiences her traumatising fear of being stuck in a box which dates back to ‘Toy Story 2’. I liked how the film focuses on Jessie and how she develops from being very scared to become very brave.

I also liked Mr. Pricklepants constant guiding of life being like a horror movie in this story. Pricklepants is very funny when he refers to plot and pacing of a movie to actual events when the toys are at the motel. He keeps at it when all the toys are safely back to where they were at the end. 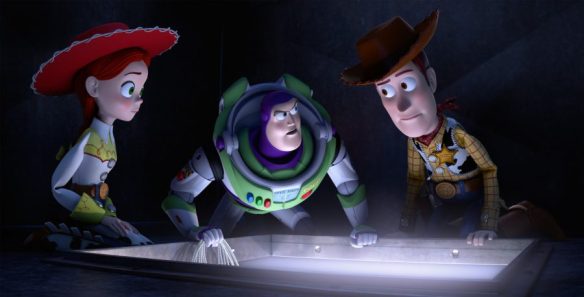 Woody and Buzz don’t have major parts to play in this film, although I enjoyed the scenes where they and Jessie are both running around in the dark under the motel. Buzz gets to glow green in the dark in those scenes. I was anxious for Woody when he was about to be sold for 2,000 dollars online.

I enjoyed the tension in this short film as it builds up throughout the story. The film feels divided into four acts, as it was shown on TV. The first three acts end on cliff-hangers that make it feel like a ‘Doctor Who’ story somehow. 😀 It was funny when there are horror movie references in this short.

One horror movie reference I felt was apparent in ‘Toy Story of Terror’ was when Jessie was in the bathroom and something slashes its claws through the curtain. That’s got to be an in-joke reference to ‘Psycho’ by Alfred Hitchcock. Eventually, it’s not the horror movie scenario as it seems in this short film. 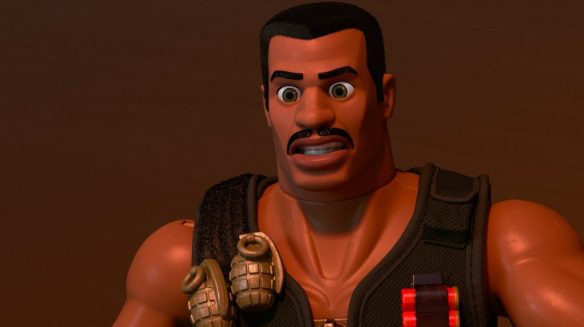 There are some new characters in ‘Toy Story of Terror’. There’s Combat Carl and Combat Carl Jr. (voiced by Carl Weathers). Combat Carl is the one who helps Jessie and encourages her to be brave. I like Combat Carl, as he can be sometimes funny in his tough, no-nonsense way throughout the film.

There’s also PEZ Cat (voiced by Kate McKinnon); Pocketeer (voiced by Ken Marino) and Old Timer (voiced by Christian Roman). I was pleased to see a Transformer in this film called Transitron (voiced by Peter Sohn). This brought me back to my playing days with ‘Beast Wars’ and ‘Power Rangers’ toys.

I enjoyed the climax of this movie where Jessie gets ‘to find a way’ out of the delivery box she’s trapped in and rescue Woody. I also liked it when Jessie manages to save the toys and herself by letting Bonnie see them. I can’t reveal any more than that! I don’t want to spoil the surprises in this! 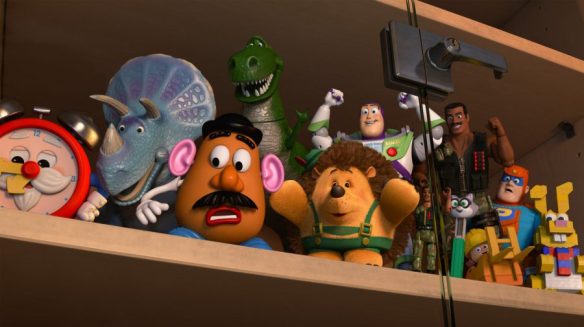 There aren’t any special features on the DVD for ‘Toy Story of Terror’. This was very disappointing, as it seems that everything ‘special’ gets added to the Blu-ray releases of films and TV shows these days. The film however doesn’t have a main menu and it keeps going in a loop whenever I watch it. 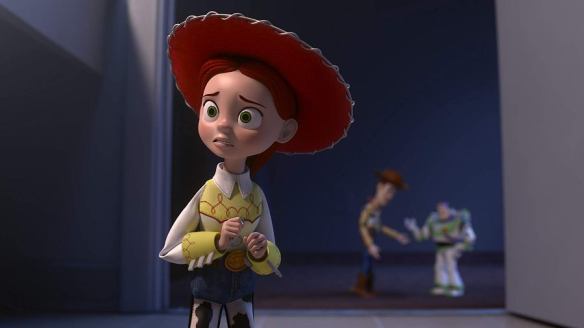 ‘Toy Story of Terror’ is my favourite out of the two ‘Toy Story’ special short films that were shown on TV. It’s both funny and tense-filling throughout. I enjoy seeing this ‘Toy Story’ short film again and again both on DVD and on my tablet whenever I go on holiday and stay at a hotel which suits it well.