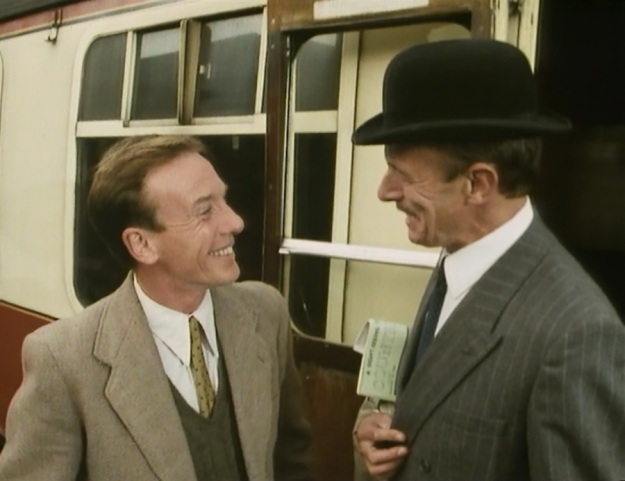 Here’s another good episode in Series 4 of ‘All Creatures’. Unfortunately Tristan Farnon doesn’t appear in this episode. I’m saddened by this. Tristan does lighten the mood up well in ‘All Creatures’.

This technically marks this as the second episode that doesn’t feature Peter Davison in ‘All Creatures’. The first one was ‘Horse Sense’. This is the first of many Tristan absences in the TV series.

‘City Slicker’ is the ninth and penultimate episode in Series 4 of ‘All Creatures’. The episode based on the ‘James Herriot’ books is by Terry Hodgkinson, who had previously penned two episodes Series 4.

They were ‘The Pig Man Cometh’ and ‘Ace, King, Queen, Jack’. Again, Roderick Graham directs this episode in Series 4 of ‘All Creatures’, making it his fourth contribution. He’ll direct the next one too.

In the episode, we begin with Siegfried and James buying some pruning shears from Malcolm Hebden as Albert Kenning…wait a sec! I just realised something! I’ve seen Malcolm Hebden before!

Yeah! Malcolm Hebden is well-known for playing Norris Cole in ‘Coronation Street’! What he’s doing here in ‘All Creatures’? Mind you, he’s played two characters in ‘Corrie’ between 1974-75 and 1994.

So he wasn’t busy doing ‘Corrie’ at the time he appeared in this episode. It’s a bit ironic really as he only plays a small role in this episode and it’s the only time that he appears in ‘All Creatures’. Weird!

Anyway, Siegfried wants to purchase these pruning shears from Albert for veterinary purposes yet James is concerned about them being sharp. They are so effective mind for ‘dehorning cattle’ in this.

That’s something I’ll get into later. After a bit of persuasion and explaining why he purchased them, James is content about Siegfried’s own purchase. This is before Siegfried suggests using it on pigs. 😀

The main story of the episode is James receiving a visit from an old school friend of his. He arrives by train. I love seeing the shot of the steam train coming into Darrowby. ‘The Railway of Time’ again! 😀

The friend is David Quilter as Andrew Bruce. David Quilter has been in many dramas including ‘A Dorothy L. Sayers Mystery’ serial featuring Lord Peter Wimsey and he was in a ‘Doctor Who’ TV tale.

Yeah! David Quilter was Greeves the butler in the ‘Doctor Who’ episode ‘The Unicorn and the Wasp’. I wouldn’t have recognised him had I known since he looks very different in this compared to today.

Andrew Bruce has come to stay in Darrowby for a few days overnight at Skeldale House where James lives. Apparently Andrew has visited Darrowby before, although we haven’t seen him before.

Maybe this was during the interim period between the 1983 and the 1985 Christmas Special when James and Helen were raising their son Jimmy and had their daughter Rosie. It’s not established well.

Anyway, Andrew is known to Siegfried and Helen when he shows up in Darrowby. Apparently Andrew is a London banker and he gets the nickname ‘city slicker’ by Helen, hence the episode title.

Upon arrival, it’s established that Andrew loves the Dales. It’s nice to see a character who finds it refreshing to be away from the city life in London and to be in the English countryside in the episode.

As the episode progresses, Andrew is considering relocating to Darrowby and running a farm of his own. His idea of running a farm seems idyllic to him. But Andrew finds out, all isn’t as it seems to be.

In the episode, Andrew accompanies James on his rounds to get an idea of what his life is as a vet. It’s so intriguing to see a character of a city background taking an interest in James’ life as a vet here.

The first stop that James and Andrew take on their rounds is at the Hugills farm. This is a farm run by four eccentric, middle-aged brothers who I found pretty amusing to watch when I saw this episode.

The four brothers are Roger Grainger as Walter Hugill; John de Frates as Thomas Hugill; Bill Rodgers as Fenwick Hugill and Ted Beyer as William Hugill. These are like Tweedledum and Tweedledee here.

Except to be more accurate, they are Tweedledum, Tweddledee, Tweddleda and Tweddledim. 😀 They keep repeating each other’s sentences every time that James and Andrew talk to them in this.

Andrew finds this amusing from a distance whilst James finds it annoying whilst getting on the job with the Hugills’ cows. This is especially when it’s so confusing on what numbers the cows should be.

This is especially when James uses the pruning shears to dehorn a cow’s head (which was pretty gruesome to see for me) and nearly getting run over by one. Andrew is shocked seeing this happen.

Another example is when James and Andrew visit a farmer who has a cow that may end up well dead. This spoils Andrew’s dreams of being a farmer since he didn’t consider that aspect of farming.

Mind you, after Andrew leaves Darrowby on the train, the cow does get better after Peter Lorenzelli as Terry Watson attends to it all night. A shame Andrew didn’t witness that before he left Darrowby.

I like the episode explores Andrew’s dreams of being a farmer that start being optimistic before getting shattered halfway through. David Quilter’s performance as Andrew shines throughout in this.

There are times when Andrew’s visit in Darrowby is a happy one. This is especially when Andrew accompanies the Herriots including the children on a day trip to the beach which we rarely see here.

Incidentally, it was a quick turnabout when Jimmy and Rosie were arguing each other over whose beach ball it was in the kitchen before James shouted at them to get outside. That was quite sudden.

There’s then the doorbell and Helen says she’s going to ‘slaughter’ someone before Siegfried enters in. It’s only drama like that was can be both amusing and tense at the same time in ‘All Creatures’. 😀

Whilst James, Helen, Andrew and the kids are enjoying themselves on the beach, Siegfried attends to Dick Brannick as Mr. Dumbleby and his heavily pregnant cow. Dumbleby is this difficult customer.

He’s a demanding farmer who rarely pays his bills and wants Siegfried to sort out his cow straight away. Siegfried could’ve refused to attend to the cow as he had entered Dumbleby’s butchers shop.

But Siegfried does attend to Dumbleby’s cow that happens to have twins and…oh dear me! We actually get to see this cow labour procedure taking place by Siegfried with Dumbleby assisting him.

Seeing those scenes of Siegfried and Dumbleby pull the cow’s twins out is gruesome for me, especially when I’m eating Dominio’s Pizza. 😀 How did viewers who saw this episode cope with this?

I mean, this is Sunday evening viewing right? Did people watch ‘All Creatures’ episodes with this cow pregnancy stuff going on? It’s too much! In fact, it’s even worse than what is in ‘Call the Midwife’. 😀

I suppose the main reason for my complaint is that they spend too long on these scenes with Siegfried and Dumbleby attending to the cow’s twins. I wanted it over with as soon as possible here.

Thankfully, the cow’s twins are delivered and Dumbleby is very grateful. He’s so grateful in fact that he gives Siegfried some sausages for all his hard work. Oh no! Why did I say sausages in this review?

(to Cuddles) “Pipe down, Cuddles! Pipe down!”

Anyway, this is a nice change of character on Dumbleby’s part, especially when he seemed so demanding and rude to Siegfried earlier. Maybe this is compensation paying the bills he did not pay.

Whilst at the beach with the Herriots, Andrew learns from Helen that James is still considering buying into a partnership with Granville Bennett. Yet Granville Bennett does not appear in this story.

And sorry to jump ahead a bit, but it’s not like Granville appears in the last episode of Series 4 to resolve this plot thread that’s being going on. Maybe this will get saved for Series 5 of ‘All Creatures’.

Helen reveals to Andrew that she seems quite keen about James going into partnership with Granville Bennett. She says it will good for him because of the latest technology and nearer the city.

And yet she’s forgetting that it will also cause him more drunken nights with Granville should James work with him? It is something she disapproves of in case the writers seems to have forgotten here.

And is there someone else I’ve forgotten in this review? Oh yes! Calum Buchanan! He barely does anything in this episode. Apart from a few cases in the TV episode, that is about all that Calum does.

And don’t get me wrong! John McGlynn’s a good actor and he’s doing the best he can with his character. But this season does not really showcase Calum’s character in the best that he does here.

I admit I did like it when he attended to cases for Peter Schofield as Mr. Pickersgill and his cow, but it’s very few and far between. Shouldn’t we have the follow-up to Calum meeting Deidre’s parents?

By the way, it was funny seeing Mr. Pickersgill in a red phone box (which is on top of a hill near the edge, what?), shouting his head off to get the Skeldale vets’ attention. He also gets words mixed up.

‘City Slicker’ is a good episode showcasing James’ friend Andrew who wanted to become a farmer in the Dales. It is a shame though that Tristan wasn’t in the episode as that would have made it better.