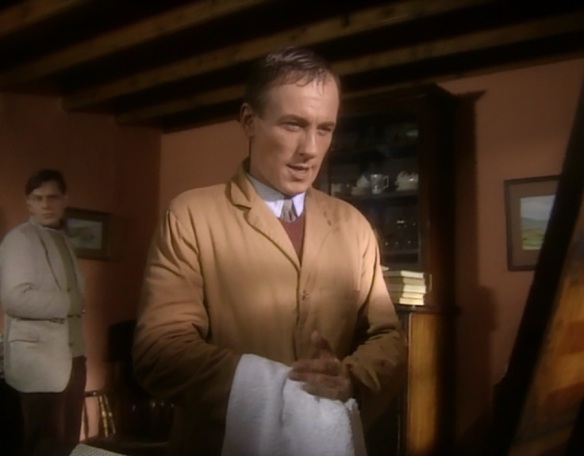 It’s pretty surreal to go into these seasons with no idea what to expect. I can preview events about to happen with certain episodes by reading the synopsis of each episode page found on IMDb itself.

Series 6 is likely to be a strange beast compared to the previous two seasons. Series 5 featured James, Siegfried, Helen and Calum whilst Tristan had been sent away to Ireland, making him absent.

This time round, Series 6 features James, Siegfried and Helen whilst Calum is only in three episodes whilst Tristan guest stars in only one episode. This is something I’ll get into when we come to it later.

I’ve no idea what’s involved with Series 6 and how the arc gets played out throughout that season. Nevertheless, it’s bound to be pretty entertaining and worthy of commenting in each review I write.

But yeah! ‘Here and There’ is the first episode of Series 6, based on the ‘James Herriot’ books, and is by Brian Finch. This marks his first contribution to Series 6 after making two contributions in Series 5.

This episode is also directed by Bob Blagden, who makes his first contribution to the ‘All Creatures’ TV series. He would direct three more episodes in the first production block of this particular season.

From the opening titles, it’s made clear that it’s a brand-new season. We’ve gone back to the Robert Hardy as Siegfried and Christopher Timothy as James shot from Series 1 to 3 recreated for Series 6. 🙂

There’s also a brand-new title card for John McGlynn as Calum that’ll get used for the time he’s in this season. And Lynda Bellingham as Helen at last gets her own title card which she had not before.

It’s a shame Carol Drinkwater didn’t get to last beyond the three seasons and the two Christmas Specials she was in. Had Carol stayed for the rest of ‘All Creatures’, she’d have got her own title card.

I’ve also noticed that everything’s shot in video for both the studio and location filming in this episode. I assume that it’s going to apply for the rest of the episodes in Series 6 as well as in Series 7.

Beforehand, ‘All Creatures’ episodes were shot on video and film. Video stuff was in studio and the film stuff was on location. The 1983 and 1985 Christmas Specials don’t apply as all were shot on film.

It’s interesting how far the ‘All Creatures’ has progressed in terms of technology with everything now being shot on video instead of film and video. It’s how the classic ‘Doctor Who’ series ended up.

Anyway, time to talk about the episode. It begins with James driving out on a snowy night – do they begin filming seasons in the snow by this point? – and attend to farmer Randal Herley as Mr. Coates.

Mr. Coates seems pretty chirpy on an early snowy morning when it’s dark. He doesn’t realise that James was sleeping that time he phoned Skeldale. He assumed the vets had been studying all night.

Why would Mr. Coates assume that vets like James and Siegfried would be studying late at night? Was this a general misconception shared between country farmers during them days? I’m not sure.

When James returns to Skeldale, Siegfried laughs it off and reminds James the importance of placing the priority of customers first no matter what time of day it is. Be careful what you say, Siegfried! 😀

Oh by the way, Helen doesn’t appear much in this episode. Yeah she and the kids Jimmy and Rosie, who we don’t see in this episode either – where have they been anyway – go off for a London break.

Yeah this is with Siegfried’s wife Caroline. Oh Caroline is still around, is she? You could’ve fooled me. I have half forgotten Siegfried was married during the whole time he’s been in Series 4, 5 and 6 here.

But wait! Does that mean we get to see Caroline again in this season? No! Caroline doesn’t even get a look in. I’m surprised the writers didn’t have Siegfried divorce Caroline at some point in the series.

In fact, here’s an idea. Since they recast Helen, why didn’t they recast Caroline? If Robert Hardy had a problem working with Annie Lambert in the 1983 Christmas Special, why not recast the character?

Anyway, with James and Siegfried’s families away for a week’s break in London, a decision gets made. Siegfried suggests that James moves back into Skeldale for a while. James isn’t so keen at first.

And it is clear Calum’s not keen either. I don’t know why he should be since I always thought James and Calum got on so well with each other. Maybe Calum does not want James cramping his space. 😀

Regardless, James agrees if only for a short while until Helen and the two kids get back. Siegfried hopes to relive the glory days of Series 1 to 3. Forget it, Siegfried. All ‘All Creatures’ fans wish that! 😀

Siegfried hopes he and James would spend long evenings talking endlessly to each other in the Skeldale living room. James seems keen about this too. But it turns out they don’t have much to say.

Hmm! Surprising that. You would think James and Siegfried would have a lot to say having known each other so well. Maybe it was first night nerves and they couldn’t think what to say on first night.

James is willing to give it another go but it seems like Siegfried has other ideas. He brings in the TV set to watch during the evenings. Something that James is quite annoyed about when he walks in! 😀

Mind you, James is no better when he’s spotted putting the wireless on by Siegfried. Then again, James made the claim he was waiting for the weather. But is Siegfried convinced with James’ claims?

By the way, it seems Calum’s cooking has improved. I mean, he manages to cook a meal for James and Siegfried instead of ending up drunk and not making it. Just as Siegfried and James ended drunk.

It was amusing how James and Siegfried politely refused more of Calum’s potatoes and he ended up eating the rest, saying “Waste not, want not.” Hmm! I suppose to Calum, those potatoes are yummy.

Siegfried soon gets problems of his own. He receives late night house calls from Brian Glover as Mr. Dawson. Brain Glover! What are you doing in this episode? Shouldn’t you be with Peter Davison? 😀

For those who don’t know, Brian Glover played Magersfontein Lugg in ‘Campion’ with Peter Davison. He also guest starred in the ‘Doctor Who’ TV tale ‘Attack of the Cybermen’ with Colin Baker’s Doctor.

Unfortunately Brian Glover doesn’t bring back Peter Davison with him. He as Mr. Dawson calls for Siegfried late at night to help with his cat Tiddles. And Mr. Dawson thinks that Siegfried is down in the cellar.

I don’t know why he would think that but then again that’s eccentric locals for you? Siegfried reluctantly has to answer to Dawson’s requests to attend his car not once, not twice but THREE times.

Even when the doorbell gets fixed during the episode, Dawson has to ring the bell repeatedly to get Siegfried’s attention. Even Siegfried can’t escape Mr. Dawson by swapping rooms with James in this.

It’s actually funny how that subplot got played out. Brian Glover is pretty good as Mr. Dawson. He’s not doing the tough guy part as he usually does, but he does good on the annoying side of things. 😀

Andrea Gibb also returns out of the blue as Deirdre McEwan, who is partly engaged to Calum. Her time must get well-spent in the last three episodes she’s in with Calum for the early part of Series 6.

Calum and Deirdre are hoping to spend time together playing records on an LP player whilst James and Siegfried are out. But Siegfried has other ideas since a meeting he was meant to have didn’t occur.

He hopes to watch snooker on the telly back home. But because of the apparent snowfall, it causes interference with the television’s image. The wireless gets affected too once James switches it on. 😀

Calum and Deirdre don’t seem put out by this. In fact, as the television and wireless seem to be on the blink, they decide to go out to the Drovers instead. Good on those two is what I say! Good on them!

The main crux of the episode is where James meets a new cowman called Basil who is working for a local farmer called George. Andrew Seear guest stars as Basil Courtnenay, George’s cowman. Wait!!!

I thought I recognised the name. Andrew Seear played Faramir in ‘The Lord of the Rings’ radio series. I wouldn’t have guessed that. It’s surreal to think I’d seen him in the flesh without realising it.

Edward Phillips guest stars as George Whitehead, the farmer in the episode. It turns out that Basil, the new cowman, has done a variety of jobs in his life including being an artist and being in a circus.

Well, this episode does that a lot with Basil’s character. When James asks where he last did a job being an artist or being in the circus, he says “Oh…here and there.” And he says that a lot in this story!

But it turns out that Basil isn’t as reliable as he may seem to be. When James prescribes Basil to provide George’s cows with some medical treatment, Basil is so slacking in providing the treatment.

James of course is very disappointed that Basil is failing in his duties as a cowman to provide the prescribed treatment to the cows. Basil is very apologetic and promises that he will get the job done.

The episode highlights Basil’s restlessness and desire to move on from one job to the next. It seems like he wanted to be a cowman but eventually got bored with the job and wanted to move on after.

It’s a shame as James seemed impressed by Basil’s variety of skills, including doing card tricks in the Drovers which he and Calum witnessed. But by the time the episode ends, James is less impressed. 😦

The episode ends with James reuniting with his wife Helen as they have dinner together in a classy restaurant. They see Basil as a waiter there after being a cowman. James doesn’t want to talk to him.

‘Here and There’ has been a pretty enjoyable opening episode in Series 6 of ‘All Creatures’. I like the new look for the series here and I’m so curious as to where it’s going to go in the next two episodes.