‘IF WISHES WERE HORSES’ 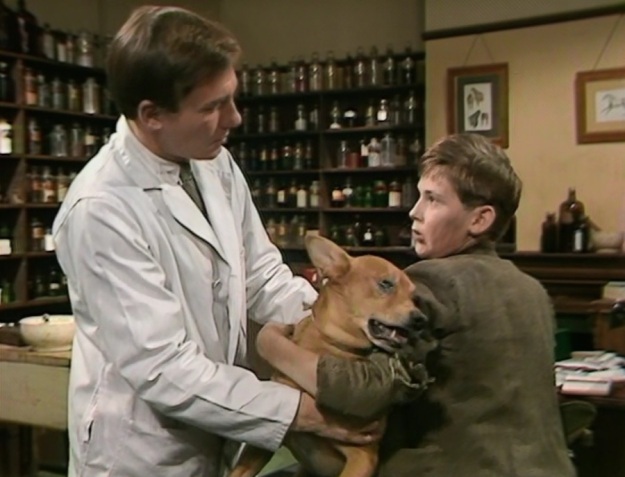 ‘If Wishes Were Horses’ is the title for this ‘All Creatures’ episode as well as for a ‘Star Trek: Deep Space Nine’ episode. Of course the two episodes themselves are really dissimilar from each other. 😀

This is an ‘All Creatures’ episode adapted by Johnny Byrne from the ‘James Herriot’ books. Hey, Johnny Byrne’s back after quite a while! The last time was when he wrote ‘A Dog’s Life’ for Series 2.

The episode is also directed by Richard Bramall, his second directorial contribution to the ‘All Creatures’ series. The first episode he directed was ‘Charity Begins At Home’, the second of Series 3.

In the episode, Tristan recovers from a rather late night of boozing and bell-ringing apparently. Actually come to think of it, we haven’t seen him do his bell-ringing yet. Will we ever get to see that?

Siegfried confronts Tristan about his bad habits when Tristan tries to hide it from him in the living room. I just find it funny when Tristan hides his hangover from Siegfried before bumping into a table.

It seems Siegfried’s annoyed with Tristan’s continual habits of drinking before he seems amused after his brother bumped into a table. I’m not sure if that’s Robert Hardy smirking or Siegfried there.

Tristan then announces to Siegfried something that slightly shocks him. He happens to have a steady girlfriend called Deborah Mount. Yeah, I know. Big shock! But this might actually turn out to be real.

The girl, Deborah Mount is of course the daughter of farmer Mr. Mount. Tristan is determined to reform his wild ways of drinking with his steady relationship with Debbie Mount during the episode.

At all! I know there’s a limit to what you can do in presenting a short-lived relationship between a regular character and a guest character in a series. But at least give us a scene where we see these two!

That way we can appreciate how serious the romance is between Tristan and Debbie. I know Tristan claims it to be serious to Siegfried, but we as the audience don’t know that watching the TV episode.

Incidentally, Judi Maynard, who sounds Scottish in the episode, guest stars as Debbie Mount. She seems a nice girl, especially when she asks James to give Tristan a message about missing their date.

James actually forgets to tell Tristan about Debbie missing their date and this is after Tristan tells Mrs. Hall he’s going to miss the evening meal at Skeldale House. Mrs. Hall isn’t too happy about this.

Mrs. Hall is someone who prefers someone to tell her in advance that he or she is going to miss one of her dinners. Tristan apparently forgot to mention it to Mrs. Hall and she says there’s ‘no excuses’.

When Tristan informs Mrs. Hall that he is going to attend dinner for the evening after all, she gets into a tizz about it. 😀 She asks Tristan to make his mind up about whether he’s having dinner or not.

Granted James should have told Tristan early in advance about Debbie’s message in order to avoid the misunderstanding between him and Mrs. Hall. It is a pretty amusing situation being set up here.

Meanwhile, Debbie Mount’s father, David King as Mr. Mount doesn’t know anything about the relationship between her daughter and Tristan. Mr. Mount’s not a friendly sort compared to Debbie.

David King was familiar when I saw him on the TV screen. He starred in the TV adaptation of ‘Oliver Twist’ produced by Terrance Dicks and he was also in one episode of ‘Some Mothers Do ‘Ave Them’.

In the ‘All Creatures’ episode, Mr. Mount may not approve of the relationship between Debbie and Tristan. When he hears about it of course, he has serious doubts with regards to Tristan’s character.

This is understandable concerning any father who has concern for their daughter courting another man. But I’d say Mr. Mount’s attitude towards Tristan is quite intimidating and not accommodating.

Mind you, Tristan doesn’t help much when he does his silly pranks in the episode. One of these is when he answers the telephone in this fake German accent. Why Tristan did that, I have no clue. 😀

It’s so funny to watch that I had to replay it a few times. Tristan realises the mistake he’s made and his reaction is so hilarious to watch. I wonder what Mr. Mount thought when Tristan did that accent.

Another example of his silly pranks is when Tristan puts in a dirty magazine among the collection of magazines in the surgery’s waiting room. Tristan sees people looking at the magazine whilst waiting.

He thinks it’s a marvellous idea and even catches Mr. Mount looking inside it whilst creeping up behind him. Mr. Mount clearly disapproves of this. It jeopardises Tristan’s chances with Debbie here.

I find it funny when Tristan attempts to attend to Mr. Mount, but Mr. Mount is insistent about seeing Siegfried or James about his horse. He does not seem to want anything to do with Trist here.

On a side note, Siegfried’s really good attending to the horse’s hooves at some stage. I do wonder how Robert Hardy, Christopher Timothy and Peter Davison are able to do the vet work convincingly.

A while later, Siegfried, in one of his foul moods, is angry with Tristan about putting the dirty magazine among the pile of magazines in the surgery’s waiting room. Tristan admits his error in this.

For Tristan to admit he was in error for putting the dirty magazine and deciding to remove it afterwards is very ‘manly’ of him. He does admit he had pleasure in teasing people about it, but still.

The final straw though when Mr. Mount sees Tristan up to his silly pranks is when he tries to surprise James with driving a car like a ghost and popping up to surprise him. Mr. Mount is not amused by it.

I never thought I would say this about any of the supporting characters in ‘All Creatures’, but for goodness sake Mr. Mount! Lighten up! I mean it was admittedly silly but a harmless little prank here.

Nevertheless, Mr. Mount wants ‘nowt’ to do with Tristan and forbids him to see his daughter Debbie again. Not that we saw Tristan with Debbie in the episode, but that’s very mean of Mr. Mount to do.

Siegfried then informs Tristan that he’ll have to attend to Mr. Mount regarding his healed horse. I’m not sure if Siegfried is joking by this stage in the episode, but it seems to be really serious for Tristan.

Another subplot in the episode is when James attends to a certain street urchin, Michael Conway as Wesley Binks. This all starts when James catches Wesley Binks stealing from Mr. Scargill’s dairy cart.

James sadly didn’t stop Wesley stealing something from the dairy cart. Tom Mennard as Mr. Scargill is grateful to James spotting the thief, but it is not the last for James to encounter that street urchin.

Wesley, for no discernible reason other than to annoy James, plays pranks on him. This includes setting a little firecracker (where did he get that from?!) to blow up in front of James outside Skeldale.

James is pretty annoyed by this. Helen seems amused however. Interesting how James takes things seriously compared to Helen, Siegfried and Tristan who might take it rather light-heartedly than him.

It doesn’t stop there when Wesley deflates the tyres of James’ car. This gets James very annoyed when he’s about to go out and attend to a case. Siegfried seems so lighthearted over this situation.

Eventually the prank-playing by Wesley stops when he comes into the vets’ surgery as his dog Duke is ill. James sees Wesley enter with his dog and berates him for a bit about his recent prank playing.

However this doesn’t stop James from helping Wesley with attending to his dog as he’s contracted distemper. Not exactly sure what this is, but it seems to be a kind of disease that certain dogs have.

James does his best with treating the dog and it seems to be work for a while as Duke is about to be on the mend. But James knows that with a disease like Duke’s got, nothing can be ever too hopeful.

Wesley doesn’t get much help from his family, who don’t care much for his dog Duke. This includes Maggie Ollerenshaw as Mrs. Binks and Wesley’s father who I presume is a drunkard whilst sleeping.

Mrs. Binks is an unsavoury character and James has an unpleasant encounter with her when she demands he put the dog down. But James won’t do the act without Wesley’s consent on the matter.

Eventually, when it turns out Duke isn’t getting better and has become worse, James persuades Wesley to put the dog out of his misery. Eventually Duke is ‘put to sleep’ and Wesley is pretty upset.

Afterwards when James sees Mr. Scargill before the episode’s end credits, it turns out Wesley’s gone back to his badly behaved ways. Before all that, Wesley had been a helpful assistant for Mr. Scargill.

Mr. Scargill is pretty angry about Wesley’s bad behaviour and wants nothing to do with him. James however is sympathetic, knowing that Wesley had something to live for before becoming bad again.

There is a small subplot in the episode when Siegfried reacts to the Weeting brothers, Paul Clayton as Brian and Paul Butterworth as Dennis, joining to the military. Siegfried reacts rather badly to this.

Helen notices this when she’s upset after falling out with Siegfried over a little something. This is the same case when Siegfried was in his foul mood with Tristan over the dirty magazine prank he played.

James soon comes across Siegfried sitting by himself looking over a country view, reflecting on the approach of war coming. Siegfried is pretty perturbed by the prospect of a big war coming to Britain.

Knowing what’s to come, this is pretty effective foreshadowing over the Second World War where Nazi Germany’s causing trouble. This could affect how the future of the ‘All Creatures’ series changes.

‘If Wishes Were Horses’ is a good episode in the ‘All Creatures’ series! It features a fun subplot about Tristan and his unseen relationship with Debbie as well as James attending to Wesley Binks’ sick dog.