‘IN WHOM WE TRUST’ 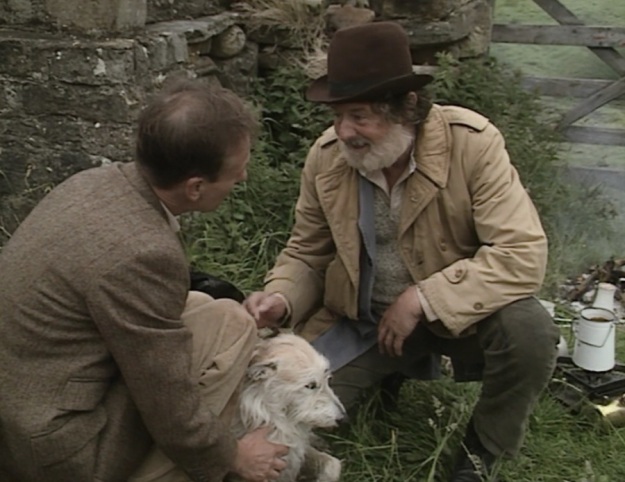 I enjoyed this episode of ‘All Creatures’ very much. It had the return of a character that I saw in a Series 3 episode (more on that later on) and it has this certain dog killing sheep mystery throughout.

After seeing this episode, I saw Series 2, Episode 4 of ‘Great British Car Journeys’ with Christopher Timothy and Peter Davison. It won’t be long before my family and me see Series 7 with Peter back! 😀

‘In Whom We Trust’, based on the ‘James Herriot’ books, is by Johnny Byrne. He’s a writer of many ‘All Creatures’ episodes; many ‘Doctor Who’ stories and came up with the ‘Kipper of Traken’ recipe!

That’s in the ‘Doctor Who Cookbook’ from 1985 by the way. 😀 ‘In Whom We Trust’ is also the second episode to be directed by Tony Virgo in Series 6’s third production block with ‘All Creatures’.

Like I said, this episode features the return of a certain character from a Series 3 episode. That is Roddy Travers and he’s played by special guest star James Ellis. Roddy appeared in ‘Hair of the Dog’!

Now this is interesting regarding Roddy’s return in the series. Originally, Roddy was played by a former ‘Doctor Who’ actor Patrick Troughton. That fact dawned on me whilst I watched the episode.

But I don’t know why they couldn’t have a different character with a different name. You can still have the hobo with the dog character as was in ‘Hair of the Dog’, but change his name for this story.

Also, Johnny Byrne wasn’t the writer of ‘Hair of the Dog’ in Series 3. That was William Humble who adapted the story from the James Herriot books. Why would Johnny Byrne bring back the character?

Don’t get me wrong. It’s nice to have a connection to the first run of the show during the reboot era, but I remember Patrick Troughton vividly in the role. James Ellis doesn’t match to what Troughton did.

I’m not saying it was wrong to cast James Ellis in the role. Quite frankly, I found him good as Roddy. But it makes the series inconsistent when you change the actors of some characters like with Helen.

James Ellis is well-known for starring in the ‘Z Cars’ series. He’s also guest starred in the ‘Doctor Who’ story ‘Battlefield’ with Sylvester McCoy. I didn’t realise that fact as I was watching the episode.

So anyway, Roddy has returned to Darrowby after being a one-time resident long ago. With the years passing, I wonder how old Roddy is in the 1950s compared to the 1930s. He must be really old!

Roddy also has a new dog with him called Murphy. Siegfried is very happy to see Roddy back and so is James. James even meets Roddy on his return home from meeting Sam Witchell, driving in his car.

Siegfried hopes that Roddy can help him out with sorting the back garden Skeldale has, since apparently it’s overgrown. Roddy is happy to help out since he is that itinerant handyman character.

Actually, on a side note, I wonder why Siegfried doesn’t have his wife Caroline to help out do the garden. He is still married to her, isn’t he? As far as I know. Why isn’t she around to assist Siegfried?!

Due to Siegfried getting bad-tempered about the business of the back garden, he agrees to help out someone’s donkey as a distraction. Helen’s slightly annoyed. She wanted him to do the back garden.

Siegfried also seems to miss his hoof knife at some point when he’s attending to the donkey. He can’t remember where he left it. Perhaps it got misplaced somewhere. Perhaps someone’s stolen it.

Helen also gets annoyed with James who comes home late to miss his lunch of lamb which she’s been preparing for him. I’m surprised there wasn’t a full-on quarrel between the two in this episode.

Siegfried is the one who has the lamb instead of James here. Siegfried advises James to remember not to take Helen for granted when out on long jobs. James doesn’t believe he is doing such a thing.

I like how James eventually talks to Helen about the possibility he may have taken her for granted. It’s a nice scene where Helen’s forgiven James and there is a sense of understanding between them.

Siegfried also finds James having got his hoof knife in his vet’s bag. James apparently found the hoof knife when he stopped in his car to chat to Roddy on the way home. He found the knife on the road.

This raises curiosity and suspicions. Siegfried has his hoof knife back whilst James has his in his vet’s bag. James eventually misplaces his thermometer in the episode, which even raises more questions.

The connections are with Roddy and his dog Murphy. Apparently a series of petty thefts occur, coinciding with Roddy’s return. This causes him to be under suspicion by everyone else in Darrowby.

Thankfully, it turns out that it was his pesky dog Murphy who has been nicking James and Siegfried’s items from their vet bags. It’s very curious why a dog like that would do that, but there you go. Dogs!

James and Siegfried laugh it off with Roddy when they find out. They even do a mock-auction for the items that Murphy’s nicked. I did find it silly and even James put on a silly voice being an auctioneer.

The silliness gets cut short when James discovers a dead sheep’s tail among the lot Murphy’s stolen. Yeah. Need to go back on this one. This relates to the dog killing sheep murder that I just mentioned.

I’ve also seen him in a ‘Miss Marple’ with Joan Hickson; the BBC version of ‘The Chronicles of Narnia: The Voyage of the Dawn Treader’; Series 4 of ‘Jeeves & Wooster’ and many more TV-related things.

I’m finding Preston Lockwood to be a recognisable actor in many things TV-related lately. He’s a very good actor and I’ve enjoyed the performances he delivers whether it’d be something like a comedy or a drama.

The farmer Sam Witchell is understandably frustrated and worried about his sheep being attacked on his farmland. He has James helping him out in order to prevent any more sheep getting attacked.

Roddy has been helping Sam out on his farm with his dog Murphy accompanying him. But when Sam sees a sheep of his dead and savagely attacked, he suspects that Roddy’s dog Murphy is responsible.

Despite James trying to deny claims to the contrary, Sam is convinced it was a dog that attacked his sheep. He’s determined to protect his animals at all costs as he keeps a shotgun on hand just in case.

Roddy becomes worried that Murphy might be responsible especially with everyone suspecting him, even in a pub. It might seem to be the case when James finds the dead sheep’s tail in Murphy’s pile of things.

Once the dead sheep’s tail has been found, Roddy has to come to the hard decision of seeing Murphy put down. This is something James and Siegfried wouldn’t wish upon Roddy in this instance.

But it seems there’s no alternative as Roddy brings Murphy into Skeldale surgery and James is about to perform the operation of putting the dog to sleep. But it turns out James may not have to do this.

Earlier in the episode, Siegfried attends to the dog of Angela Walsh as Mary Hawkins and William Ilkley as Mr. Hawkins. The dog’s a beagle and seems a nice dog that got caught in some barbed wire.

The Hawkins do seem an odd couple mind as they keep something secret from Siegfried when he attends to the animal. The impression also gets given that the dog doesn’t belong to Hawkins in this.

Eventually, the dog goes missing and Siegfried discovers this when attending to the Hawkins the day after he was meant to be meeting them. The Hawkins reveal to Siegfried this has happened before.

The dog does return, but in a dead state. Yeah. Sam Witchell returns with the dog dead. It’s revealed the Hawkins’ dog was responsible for killing the sheep on his farm. That was so shocking to discover.

Once Siegfried realises this, he phones James back at Skeldale to tell him to stop doing the operation on Roddy’s dog Murphy by putting him down. He’s in just in time as James doesn’t do the operation.

This is a huge relief on Roddy’s part and I’m sure he thought it was all too good to be true. I’m glad Murphy was innocent for not killing Sam Witchell’s sheep, but very sad that it was the Hawkins’ dog that did it.

At the end of the episode, Roddy and his dog Murphy are about to leave Darrowby. But Sam Witchell bluntly wants Roddy back to help him out on the farm again. Roddy is very happy to do this.

I like how Sam Witchell forgives Roddy at the end by making him work for him again, even if it was in a blunt manner. I suppose some people can be kind-hearted even if they are blunt at times in life. 😀

One of my favourite moments in the episode is when a girl visits Skeldale’s surgery. That girl happens to be Aimee Jackson as Miranda. She brings in her dog for Siegfried to attend to in surgery.

Siegfried thought that the dog was called Kate. But Miranda has changed the dog’s name to Lucy after reading a book. That book happens to be called ‘The Lion, the Witch and the Wardrobe’. WOW!!!

I was pleased to hear a Narnia reference in the episode. Siegfried even asks James if he’s read the book yet after Miranda’s gone with her dog Lucy. It tickled the Narnia fan in me hearing that reference.

Apparently, it’s been two years since ‘The Lion, the Witch and the Wardrobe’ was published. That would’ve been 1950 it was published. Thus it means ‘All Creatures’ takes place in 1952 at this stage. 😀

The episode also features Tony Capstick as Fred Allan, the man who brought in his donkey for Siegfried to attend to before attending to Skeldale’s back garden. The donkey’s name happens to be Tinker. 🙂

‘In Whom We Trust’ is very good. I’m pleased with how it turned out with Roddy’s dog Murphy being innocent despite stealing things from the vets’ bags. I also enjoyed the Narnia reference in this story.