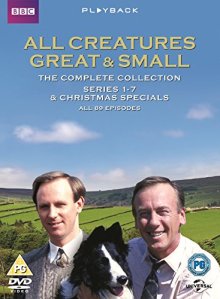 ‘THE BULL WITH THE BOWLER HAT’ 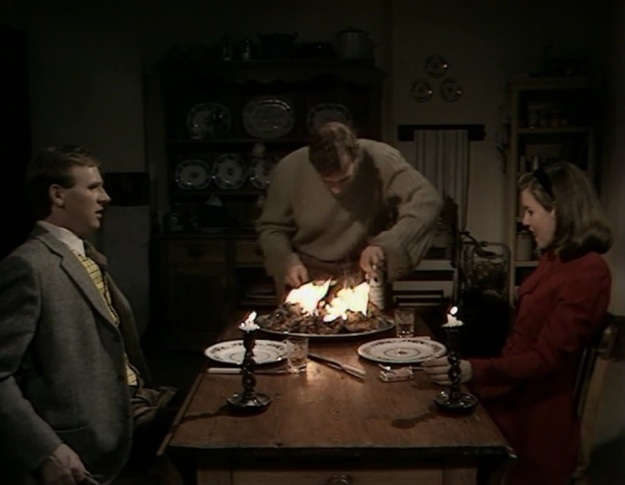 I am finding these ‘All Creatures’ episodes in Series 4 to be rather average so far. I hope that’s not the case for the rest of the series since I would like something to be gained from watching these episodes.

With that said, let’s talk about the third episode of Series 4 – ‘The Bull With The Bowler Hat’. This episode is by Johnny Byrne, based on the books by ‘James Herriot’. Peter Moffatt directs it once again.

The episode features the return of Peter Martin in ‘All Creatures’. But this time, he isn’t playing Farmer Handshaw as he had played him in the first two seasons. I made that mistake before I wrote the review.

I don’t get that! Why have Peter Martin play a different character when he was playing an already established character in the series’ first two seasons? Have people forgotten Farmer Handshaw here?

I mean, I remembered him from watching the shows’ first two seasons for these reviews on my blog. He was the farmer who mocked James’ diagnosis on one of his cows in the series’ second episode, ‘Dog Days’.

Maybe people who were watching the TV series at the time wouldn’t remember Farmer Handshaw when it came to the reboot. I’m not sure, but Mr. Hartley sounds and acts like Farmer Handshaw here.

Mind you, Peter Martin does look older compared to how he looked when he was playing Handshaw in the series. But I doubt that his age would justify Mr. Hartley is nothing like Mr. Handshaw’s character.

Anyway, the episode’s title is in relation to Tristan since he gets called that by Hartley and his friends. Not sure what ‘bull with the bowler hat’ is supposed to indicate. Maybe it’s a metaphor or something.

In any event, this episode follows on from ‘Barks and Bites’ where Tristan tries a new veterinary approach from the Ministry of Agriculture. It has to do with the artificial insemination he’s introducing.

Tristan tries to convince sceptical farmers like Hartley over the benefits of artificial insemination. This involves the use of…a cylinder filled with water…and applying it to when two cows…have sex together?

Now I don’t fully understand what goes on here with this approach and I may have my facts wrong about this. But Tristan seems to know what he’s talking about as he tries to demonstrate it to Hartley.

The main event of this subplot occurs at the end when Tristan has Siegfried accompany him to attend to Hartley’s cows. They make a first attempt to use the cylinder when one of the cows ‘humps’ another.

To which, he eventually does on the second attempt. Yeah Tristan tries out the procedure again instead of Siegfried. It was amusing Tristan was reluctant to do it even he knows about the procedure.

Why didn’t Tristan pour the water into the cylinder himself? In any case, Tristan manages to do it second time and it all works out fine. Hartley had a good laugh about it, so I’m glad somebody’s happy.

Also in the episode, Tristan is having problems in his relationship with Andrea Gibbas as Deirdre McEwan. In that, he doesn’t seem to get anywhere with her. I’m surprised since Tristan is a charmer. 😀

Tristan has had dates with Deirdre but they always seem to go wrong for him. I’m sure Deirdre’s a nice person, but she doesn’t seem to warm to Tristan’s charms. Again, I’m very surprised by this revelation.

Sharing this with Calum, Tristan agrees to take on his suggestion to invite Deirdre to dinner. That is dinner at Skeldale House where Calum will provide a special dish for them. Hmm. Sounds very yummy.

But it goes wrong for Tristan when Calum seems to be impressing Deirdre instead. Calum also seems to hamper Tristan’s efforts to impress Deirdre. I thought Calum was supposed to be helping his friend.

The special dish that Calum prepares for Tristan and Deirdre is a special meal of roast duck. Why am I thinking of the ‘Fawlty Towers’ episode, ‘Gourmet Night’? 😀 Calum’s roast duck has this zest though.

When Calum serves it to Tristan and Deidre, he applies brandy (or is it scotch) to it as well as letting Deidre strike a match to it. The duck becomes embroiled in flames and it startles Tristan in the process.

I don’t blame Tristan for being startled. I’m not sure I would like to have my roast duck in flames before starting to eat it. I’m sure it’s to heat it up, but how long does it take for those flames to die afterwards?

Deirdre also seems impressed by Calum’s choice of music. This is especially when he plays the piano and sings to her. She also knows and sings the song too. I think it’s a Scottish song that they are singing.

But Calum spoils Tristan’s fun with Deirdre when he switches off the Glenn Miller music on the gramophone record player and he plays Scottish dance music instead. Deidre dances with Calum to it.

Uh…shouldn’t it be Tristan’s who’s supposed to be charming Deirdre, not Calum? Calum’s being a bit mean when he’s attracting Deirdre’s attention instead of Tristan. I feel sorry for Tristan in the episode.

Tristan shares with James later on in the episode about how annoyed he is that Deirdre and Calum seem to have a lot in common. I don’t know if this going to lead into anything with Deirdre and Calum.

Speaking of which, I’m not sure I really care for Calum’s character in the series. I mean, I know it’s early on in Series 4, but I don’t find Calum an easily likeable character when I know so little about him.

Another example of where Calum’s character can be put into question is when he brings home an owl that was lost somewhere. This is without Siegfried’s consent and knowledge once he has found the owl.

This is in the hallway when Siegfried finds the owl at the stair-rail. He calls Calum for an explanation. Calum insists he’s looking after it until its gets better and is keeping it in the attic with the door locked.

However the door to the attic hasn’t got a secure latch to it whilst Calum is seeing to it. Fortunately, Calum fixes the latch to the attic door by the time Siegfried finds the owl on the stair-rail a second time.

Don’t get me wrong, the owl is a beautiful no doubt. But it’s Calum’s eccentric behaviour in keeping the owl that’s unnerving, especially in how Siegfried reacts to it. The owl also leaves it droppings in this.

James has his own subplots in the episode when he’s attending to a cow belonging to Peter Ivatts as Tom Maxwell. Peter Ivatts has guest starred in ‘All Creatures’ before in the TV episode ‘A Dying Breed’.

Unfortunately, the cow that James treats for Tom Maxwell sadly dies. James gets concerned, blaming himself for when the cow died and that legal action might be taken against him from Mr. Tom Maxwell.

Surprisingly for James, Tom Maxwell doesn’t take legal action. It seems that Tom Maxwell was okay with regards to the cow dying after James treated it and that he doesn’t blame James for what happened.

Eventually, when another one of Tom Maxwell’s cows becomes ill, James gets determined to cure the cow of whatever it is suffering. He even concocts his remedy with a mixture of veterinary treatments.

It was interesting to see James seem so fiercely determined to cure Tom Maxwell’s cow and work non-stop in the barn. Tristan comes in to take over from James when he seems pretty stubborn about it all.

Eventually James manages to cure the cow and Tom Maxwell asks James with Tristan to come over and see it for himself. James is pleased as well as Tom Maxwell. Though James left a lot of rubbish. 😀

James also attends to the pregnant dog of James Bree as Humphrey Cobb. I didn’t recognise James Bree at all throughout the TV episode when I watched this for the first time on DVD for this review. 😀

James Bree has been in three ‘Doctor Who’ stories including ‘The War Games’, ‘Full Circle’ and ‘The Trial of a Time Lord’. Bree was also in another ‘All Creatures’ episode in Series 1 called ‘Out of Practice’.

I’m not sure if Humphrey Cobbs has a mental condition or something or whether he’s a drunkard in the episode. In any event, Cobbs phones James Herriot to come sort his dog when he becomes panicky about her.

This is also late at night when James is in bed. This happens twice and it turns out that there’s nothing wrong with the dog. It’s just her owner who is panicking over nothing and is imagining the worse here.

James gets really annoyed with Cobbs who phones him up in a panic and when he’s drunk. Or maybe it’s a mental condition. Anyway, the dog has her pups and all is well. You do think that would be over.

But no! Cobbs calls up a third time and James initially believes it’s nothing serious. But it does turn out to be serious. Thankfully James realises it in time after he’s been on the phone to Cobbs in the episode.

James has Helen accompany her when they go to see Cobbs’ dog and they attend to a certain condition he has. Thankfully the dog gets cured and Cobbs is very relieved after being told to make a cup of tea.

Rosie Herriot makes a small appearance in the episode when she’s out in the garden with her father. Jimmy Herriot doesn’t appear in the episode, despite being credited during the episode’s end credits.

I don’t think Mrs. Greenlaw interesting enough to be a character as the Skeldale House’s housekeeper in the series. Don’t get me wrong. She’s nice enough, but I don’t find her to be good as Mrs. Hall here.

The episode also features George Malpas as Mr. Dakin. George Malpas has been in ‘All Creatures’ before, appearing as Mr. Dean in two episodes from Series 1 and 2 including ‘Dog Days’ and ‘Cats and Dogs’.

His character of Mr. Dakin is with Siegfried in a subplot about one of his cows which I didn’t fully understand. Other than that the cow does not want to leave Dakin’s farm as it goes back into the barn.

So yeah, this episode is pretty average from Series 4. It was interesting when Calum ruins Tristan’s attempts to win Deirdre’s affections. Not so sure how that’s going to continue for the rest of the series.