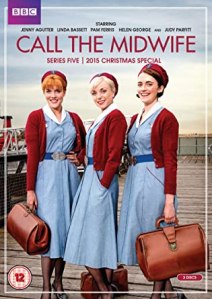 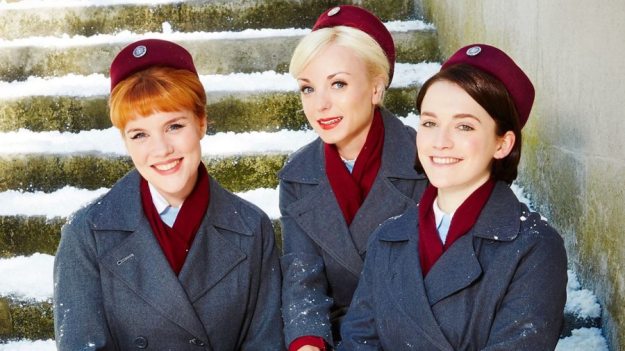 It’s Christmas 1960 for this particular special. Festive cheer seems plentiful in the air, especially as Poplar readies itself for Christmas. But as always, there are emotional dilemmas on the way, especially with the Nonnatus House members concerned as well as the members that live in Poplar.

In the special, there are mixed reactions from the midwives of Nonnatus House when they hear that a television crew wants to film their church carol service featuring the local children’ choir. And it’s from the BBC, I might add. Some are for itwhilst some, like Pam Ferris as Sister Evangelina, are against it.

The BBC producer who comes to see their church is Adrian Scarborough as Barrington Swann. I’ve seen Adrian Scarborough in the 2018 film ‘Patrick’. He was also in the ‘Doctor Who’ TV episode ‘A Town Called Mercy’ with Matt Smith and the audio ‘The Boy That Time Forgot’ with Peter Davison. 🙂

It was nice to see him in this particular Christmas Special, although he is rather snooty and looks down on the church he visits. Jack Ashton as Tom Hereward the vicar and Laura Main as Shelagh Turner do all they can to ensure the TV church carol service will be a successful one despite setbacks.

Anyway, this outbreak of measles means it’ll be likely that the show will be stopped. Thankfully, Shelagh comes up with a solution in order to satisfy the BBC producers’ needs. And I think it works, especially with that spirit of Christmas being filled in the Nonnatus House team who sing at the end.

Shelagh also continues to be a very good singer here. It’s also nice to see the Turner children, Max Macmillan as Timothy and Alice Brown as little Angela in the special. Timothy helps his mum Shelagh out when playing the piano for the choir. There are a few issues with the choir that perform songs. 🙂

For one thing, Barbara tries to quieten the children down during a church service by giving them sweets before Tom asks them to come up and sing. Barbara has to ask the children to give her their sweets whilst they go up and perform. Seeing Barbara holding the sweets in her hand was amusing. 🙂

There is a moment when one of the kids who sang in the choir brought his dog in so that he can sing. Shelagh tells the boy that he can’t bring his dog into the choir and that dogs aren’t allowed. Well, I find that discriminatory. Dogs not allowed to sing in the church choir at Christmas 1960?! A disgrace!

Whilst that’s going on, Emerald Fennell as Patsy and Charlotte Ritchie as Barbara join Tom the vicar in taking a party of children to see the Regent Street lights. Mind you, one of the children is ill and Barbara looks after her on the bus trip. 🙂 This is the measles aspect of the tale coming into play here.

I liked the scene between Tom and Barbara when they’re talking about sweet lollies and getting to know each other. At this point, I don’t know if anything’s going to be developed between them but I’d like to think so especially since Tom’s a vicar and Barbara’s the daughter of a parish priest herself. 🙂

It’s sad mind when Barbara can’t go home to be with her family since she’s very busy with the work she’s got in Poplar. I’d like to think that we’ll get a chance to see Barbara’s parents at some point. Maybe when she falls in love with someone and she has to introduce her parents to that someone.

Patsy also gets to be reunited with an old flame of hers, Kate Lamb as Delia. I was surprised to see Delia back. I thought we saw the last of her when she had that accident at the end of Series 4. But nope! She seems to be better and she’s got her memory back. Delia even meets with Patsy in Poplar.

I don’t know if it was fan pressure that persuaded the producers to bring Delia, but she’s back and it seems like she’s going to be around for a while to keep Patsy happy. There is a moment where Patsy and Delia are about to kiss in a red phone box before they soon get interrupted by someone outside.

I wonder why ‘Call the Midwife’ wasn’t brave enough to show Delia and Patsy kissing each other when ‘Grantchester’ has characters like Leonard and Daniel kissing each other. I mean, they did a Series 4 episode about a male character that had homosexual tendencies since he kissed another man.

It just makes me curious. Maxine Evans as Mrs. Busby, Delia’s mother also appears in this special when they’re visiting London for Christmas. Delia’s mother hopes for her daughter not to come back to work after all she’s been through. But Delia’s pretty determined to return to home back in Poplar.

Meanwhile, Judy Parfitt as Sister Monica Joan becomes ill and she has a row with Sister Evangelina about TV, Christmas decorations, childhood and such. It causes Sister Monica to disappear and that in turn causes alarm. The Nonnatus House team and the police try to find that missing Sister Monica.

There’s a moment when a body gets found on the river bank of the Thames and Ben Caplan as Sgt. Noakes informs Nonnatus House that it could be Sister Monica. Jenny Agutter as Sister Julienne and Sister Evangelina go to examine the body in the morgue. It turns out that it’s not Sister Monica Joan.

Whilst it’s a relief, it’s still sad that the woman who got found on the river bank died so severely. I’m glad that’s touched on in the episode and that the poor woman wasn’t forgotten about. So where is Sister Monica Joan? Well, apparently, she happens to be back in that house where she lived as a girl.

It’s also revealed that Sister Monica Joan’s real name happens to be Antonia Keville. Sister Evangelina picks up from Linda Bassett as Nurse Crane about where Sister Monica may have gone. She and Cliff Parisi as Fred Buckle go off to find Sister Monica and bring her back home to Nonnatus.

I’ve also heard her in the Big Finish audio of ‘Doctor Who’ called ‘Masquerade’ with Peter Davison and Sarah Sutton. It was nice to see her in this ‘Call the Midwife’ Christmas Special. Iris Willens is a grieving mother who lost her three-old child years ago. She does her best in helping the community.

Iris is rather sad when one of her relatives has twins. She gets to have a chance to hold one of the babies before the mother’s mother takes it away from her. Helen George as Trixie and Bryony Hannah as Sister Mary Cynthia help out in the operation of delivering the two babies of Iris’ relative.

Iris shares her grief to her husband Rob Jarvis as Walter Willens as well as to Annabella Apsion as Violet Buckle when visiting her shop. Iris also tries to be optimistic when helping in the cleaning of the church for the BBC broadcast of the church choir service, but it’s not easy for her in the process.

Eventually, Iris receives an unexpected, happy Christmas surprise when she starts getting pains in her stomach. She assumes it might be her kidneys, but she’s told by Dr. Turner and Shelagh that she’s having a baby. This is a surprise even for me since Iris did not have the signs of being pregnant.

It must be a gift from God. I pray that can happen for many women. 😀 Anyway, Iris has the baby delivered and she calls her Joy. Her husband Walter is nervous while waiting and Dr. Turner helps him with smoking a cigarette. I know it was accepted to smoke back then, but I wouldn’t approve. 😀

The 2015 Christmas Special of ‘Call the Midwife’ has been nice to watch. I think there are things too close to home like the measles outbreak which doesn’t get resolved here, reflecting the current time of 2020, but I liked how Victoria Hamilton’s character gets an uplifting story and a nice surprise here.