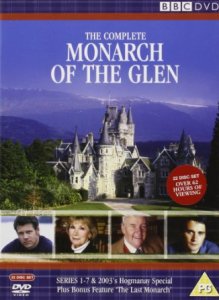 I love ‘Monarch of the Glen’! It’s one of my favourite TV comedy drama shows set in the Highlands of Scotland. I first watched this TV series when my Dad purchased the complete Series 1 on DVD in 2003.

The selling point of this series for me was that Richard Briers was in it. Having seen Richard Briers in BBC comedy shows like ‘The Good Life’ and ‘Ever Decreasing Circles’, I was keen to see him in this. 😀

There’s also Alexander Morton as Golly, Dawn Steel as Lexie and Hamish Clark as Duncan. Although not top billed in the main credits for Series 1, they are like main regulars when watching this TV series.

Anyway, let’s talk about how this episode begins. The series takes place in Glenbogle, a Highland estate where Richard Briers as Hector MacDonald resides. I love the opening scene in the first episode.

Hector sees Big Eric, a Highland stag, through his telescope at Glenbogle House. He immediately races downstairs to go and catch it, hijacking Duncan’s speed boat and driving it through the loch in the process.

Everybody including his wife Molly, the housekeeper Lexie and the gillies Golly and Duncan watch Hector riding on the speed boat before he comically ends up in the loch. I did find it hilarious to watch.

Meanwhile in London, Archie MacDonald, a young restaurateur, gets summoned back to Glenbogle. He hears from his mother via phone that his eccentric father had a nasty accident, falling into the loch.

Thus he heads back. But upon his return, he finds it all to be a trick. His father Hector happens to be alright. Archie is determined to get back to his restaurant and girlfriend in London as soon as possible.

Anna-Wilson Jones guest stars as Justine, Archie’s girlfriend who appears earlier in the episode. She tells Archie he must go back to see his father in Scotland whilst he looks after the restaurant in London.

Throughout the episode, we learn that Archie left his family home for a life in London with his girlfriend Justine in order to get away from any Glenbogle responsibilities. This was after his brother Jamie died.

But whilst Archie remains in Glenbogle for the time he’s there, he discovers to his shock that the Glenbogle estate is on the verge of bankruptcy. The estate has a huge debt to pay and it’s shockingly high.

Archie confronts his father over the matter, but Hector doesn’t seem too bothered about it. It then turns out his parents put the estate in a trust for tax reasons and Archie is now the owner of the estate.

This shocks Archie greatly as he’s now the Laird of Glenbogle. This something he didn’t want at a young age, especially when it was supposed to be his brother Jamie taking that title before he tragically died.

Archie considers selling Glenbogle in order to pay the debt the estate has to pay. But his parents and Glenbogle locals don’t want this to happen. There’s a tradition and a community to uphold in the area.

I do like how this episode sets up the characters. The storytelling is easy to follow as well as the comedy. The relationships Archie has with his parents and employees at Glenbogle are very intriguing.

Archie also meets the young school teacher Katrina who becomes a love interest for him in the series. Their relationship at first is rocky and antagonistic, especially when Katrina represents the community.

The episode also features John Dougal as Robbie Fraser, who helps Archie’s father Hector managing the finances of the estate. But it turns out Robbie is crooked and Archie exposes him to his father later on.

I did like that scene where Archie exposes Fraser to Hector and a choice is made on who Hector is to believe: his son or Fraser. I liked it Hector believes his son and tells Fraser to pack his bags and get out.

The first episode of ‘Monarch of the Glen’ is very good, introducing the characters and the storytelling is excellent. I love the performances of the cast and I was looking forward to seeing more of this series.