‘THE WOMAN IN GREEN’

This ‘Sherlock Holmes’ film is called ‘The Woman in Green’, but it’s hard to tell whether she is in green since the film’s in black and white. I don’t think they even refer to her as ‘a woman in green’.

‘The Woman in Green’ is the eleventh of the fourteen ‘Sherlock Holmes’ film series, starring Basil Rathbone and Nigel Bruce. It’s also notable for featuring the third appearance of Professor Moriarty.

In his first two films, Moriarty was played by a different actor. For ‘The Adventures of Sherlock Holmes’, it was George Zucco and for ‘Sherlock Holmes and the Secret Weapon’, it was Lionel Atwill.

Here in ‘The Woman in Green’, Henry Daniell plays Professor Moriarty. Moriarty must be a Time Lord from Gallifrey if he can change his face. Could Sherlock Holmes and Dr. Watson change faces? 🙂

Hillary Brooke plays the titular ‘woman in green’ called Lydia Marlowe as she hypnotises her subjects to commit unintentional murders. And she’s so alluring, it’s very sad to think of her as an evil person. 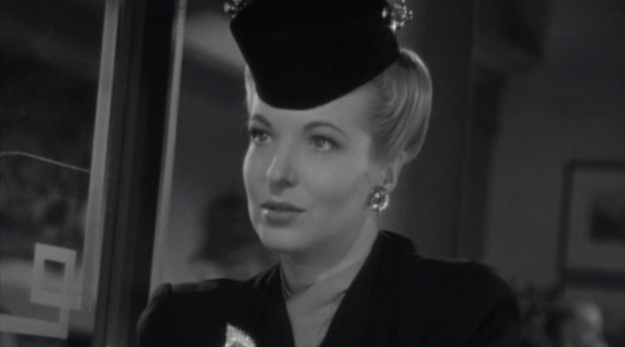 The film itself is an adaptation of Sir Arthur Conan Doyle’s story called ‘The Adventure of the Empty House’. There’s also material taken from the story ‘The Final Problem’. The film was released in 1945.

In the film, Sherlock Holmes encounters a society of hypnotists; the mysterious woman Lydia Marlowe; and his old enemy Moriarty when he’s investigating a series of bizarre murders in London.

The murders are bizarre because the right forefinger of each victim is neatly severed without a heavy loss of blood. Can Holmes solve the mystery with Dr. Watson’s help or will he get hypnotised too? 😐

Basil Rathbone once again delivers a stupendous performance as Sherlock Holmes in the film. I’m happy that Basil’s Sherlock didn’t succumb to Lydia Marlowe’s hypnotic techniques by the film’s end.

It’s also intriguing how he picks up on the details that nobody else notices like suspecting Lydia Marlowe being involved with the murders. He also has a good scene confronting Professor Moriarty.

Nigel Bruce is equally good as Dr. Watson in the film. It was amusing when Watson didn’t seem to believe in the power of hypnotism until he was subjected to a bit of playful hypnotism in the film. 😀

In terms of Watson and Holmes’ friendship in these films so far, they seem to have known each other for a very long time. It makes you wonder how they met since they get on really well together.

Matthew Boulton as Inspector Gregson is decent enough and he seems more willing to believe Sherlock Holmes’ theories compared to Lestrade when they are investigating the strange murders. 🙂

There’s also Paul Cavanagh (who was previously in ‘The Scarlet Claw’ and ‘The House of Fear’) as Sir George Fenwick. There’s also Eve Amber as Maude Fenwick and Frederick Worlock as Dr. Onslow. 😀

There are un-credited cast members like Percival Vivian as Dr. Simnell, Fred Aldrich as a detective, Leslie Denison as Vincent and Olaf Hytten as Norris. I wonder why these actors weren’t credited. 😀

I like how the film ends with Holmes managing to fool his opponents without getting hypnotised and Watson saves him. Moriarty manages to escape however. Will he ever return to face dear Sherlock?

‘The Woman in Green’ is another good instalment in this ‘Sherlock Holmes’ film series. I think the second half is better than the first, but it’s good to see Holmes and Watson face Moriarty and Lydia.