The fourth story in the ‘Miss Marple’ series starring Joan Hickson is ‘A Pocketful of Rye’. This is presented as a 2 x 50 minute episode story and based on the original 1953 novel by Agatha Christie.

‘A Pocketful of Rye’ was shown on the 7th and the 8th of March 1985. I don’t recall the ITV version of the story much to compare it to the BBC version, but I do recall there was a witchcraft scene in it.

In this story, a wealthy banker named Rex Fortescue collapses in his office. It seems that he was poisoned and had ‘a pocketful of rye’ in his pocket. However, nobody seems to be troubled by it all. 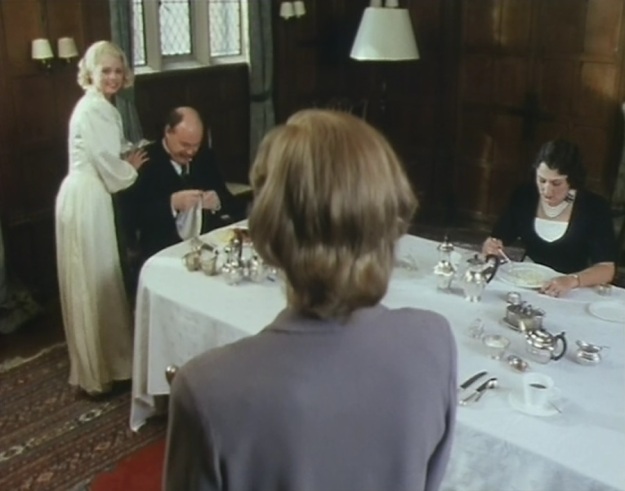 Rex happened to be a tyrant within his family. But soon a few more people get killed like flies. When Miss Marple gets involved, she’s reminded of the nursery rhyme ‘Sing a Song of Sixpence’ to solve it.

I was looking forward to seeing this ‘Miss Marple’ TV adaptation, especially as Peter Davison guest starred in it. Peter is the Fifth Doctor in ‘Doctor Who’ and Tristan in ‘All Creatures Great and Small’.

In this drama, Peter plays Lance Fortescue, who is one of the sons of Rex Fortescue who went away to Africa. He’s married to Frances Low, who I’ve seen in ‘The Brittas Empire’, as Patricia Fortescue here. 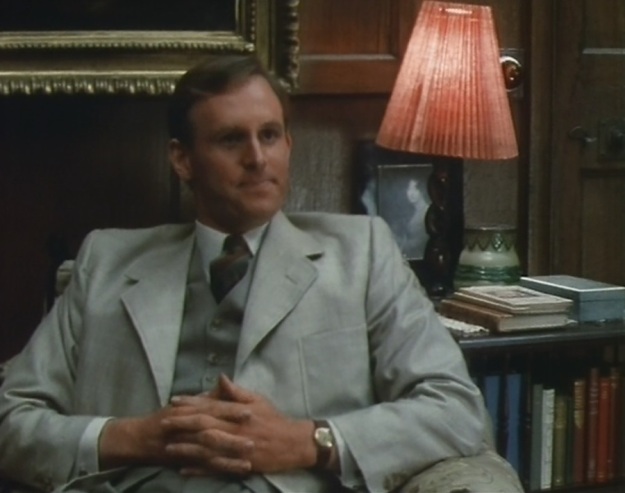 I had a nice chat with Peter about his role in ‘Miss Marple’ with Joan Hickson at ‘Science of the Time Lords 2016’ in Leciester, January 2016. It was very intriguing how he viewed Agatha Christie dramas.

Peter made a point that Agatha Christie’s writing was a bit of a cheat in terms of revealing who the murderer was. I could see his point but I did say I find Agatha Christie mysteries to be fun. He agreed.

Again, it takes a while for Joan Hickson’s Miss Marple to actively become involved in the murder mystery of this story. She gets involved in ‘Part Two’ as she goes to check somebody working there.

That somebody is Annette Badland as Gladys. Annette would play Margaret Slitheen in the ‘Doctor Who’ stories ‘Aliens in London’/’World War Three’ and ‘Boom Town’. It was so nice to see her here.

I enjoyed Joan Hickson once again as Miss Marple in this TV production. There is a moment where she’s quietly angry about Gladys getting killed in the story, which I found pretty effective watching it.

I do like how Joan Hickson’s Miss Marple quietly gets involved in a police investigation with polite eccentricity. I could believe how so well observant she is and isn’t mean-spirited in her investigating. 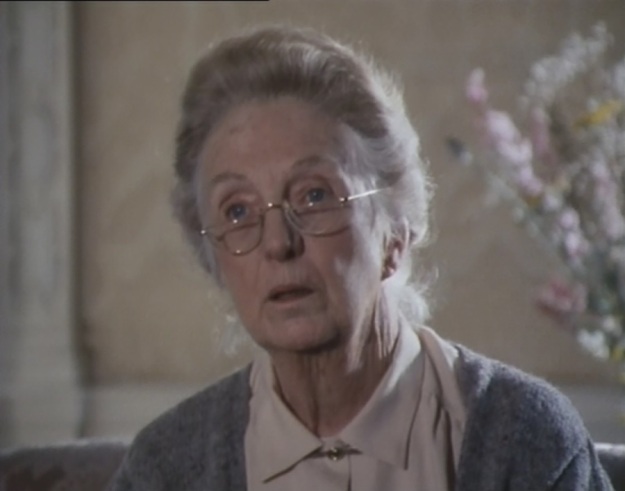 The guest cast also includes Timothy West as Rex Fortescue, who dies early on in the story. I thought he didn’t last long in the opening moments of the story until we got some flashback scenes with him.

Yeah that happens quite a bit where we get to have flashbacks to what happened earlier on. This is when Selina Cadell as Mary Dove the housekeeper gets to recall events to Detective Inspector Neele.

Tom Wilkinson guest stars as Detective Inspector Neele in the story. I’ve seen Tom Wilkinson in the 1993 BBC TV production of ‘Martin Chuzzlewit’ and he was the narrator of the 1999 ‘David Copperfield’.

There’s also Clive Merrison as Percival Fortescue, the other son of Rex Fortescue. I’ve seen Clive Merrison in two ‘Doctor Who’ stories including ‘The Tomb of the Cybermen’ and ‘Paradise Towers’.

The guest cast also includes Fabia Drake as Miss Henderson; Rachel Bell as Jennifer Fortescue, Percival’s wife and Stacey Dorning as Adele Fortescue, who I thought was too young to be Rex’s wife. 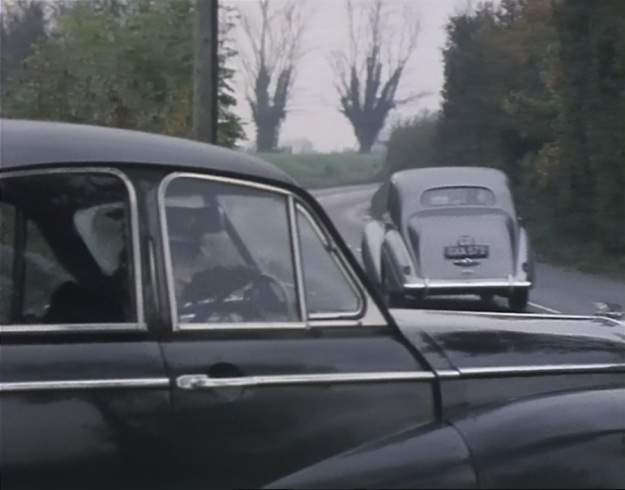 I enjoyed the 1985 TV adaptation of ‘A Pocketful of Rye’. There are complexities to the plot which certainly require a second watch. But the highlight of the TV story was Peter Davison as a guest star.