This is before Anne Hathaway became famous in ‘The Dark Knight Rises’ and ‘Les Misérables’. 😀

It’s interesting to talk about this film. My previous interest in ‘Becoming Jane’ happened in 2011 when I used the film as a source of research to develop Jane Austen in my ‘Doctor Who’ adventure ‘The Austen Code’. Some would argue that ‘Becoming Jane’ is quite an unreliable source in that regard.

I would concur, but then again, films that dramatise the life story of famous people in our history are going to take artistic liberties anyway. Whilst I like ‘The Glenn Miller Story’ and ‘Stan & Ollie’ as films, they wouldn’t necessary be considered the accurate representations of the people they’re based on. 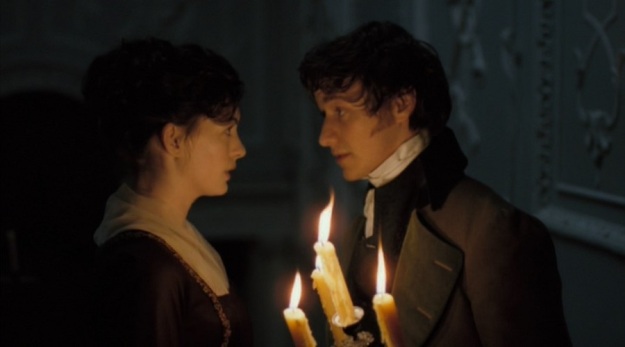 ‘Becoming Jane’ was released in 2007. It depicts the early life of Jane Austen who authored romances such as ‘Pride and Prejudice’ and ‘Sense and Sensibility’. I’ve seen enough film and TV adaptations of Jane Austen’s books to know how her stories work and what her world was like then.

The film takes place in 1795 England. Jane Austen is living with her mother, her father and her sister Cassandra in Steventon, Hampshire. Jane’s parents have yet to find a suitable husband for her, whilst she’s aspiring to be a writer. This is much to her mother’s dismay and yet to her father’s delight. 🙂

As the film progresses, Jane meets the love of her life Thomas Lefroy, who is aspiring to become a successful lawyer. Despite the love they have for each other, Jane cannot bring herself to commit to being with Lefroy forever, since she is of penniless standards and is afraid of ruining their happiness.

One of the aspects about this film that appealed to me is how it depicts Jane’s unwillingness to commit to marriage, as love and fortune don’t always go hand-in-hand. In Jane Austen’s time, wealth was considered a high priority in a marriage between two persons before love gets considered.

This is evident in the books Jane Austen wrote that depicted late 17th century/early 18th century life as well as in this film and the following biographical film ‘Miss Austen Regrets’ for TV. Miss Austen sadly did not marry in life and died quite young. This is tragic when you consider the books she wrote.

I wonder how things would’ve been had Jane Austen married someone like Thomas Lefroy in real life and that they had a happy marriage together whilst she was writing successfully in her books. It’s fascinating how ‘Becoming Jane’ depicts the early version of Jane Austen who dealt with romance. 🙂

Whether ‘Becoming Jane’ is a true representation of that is a matter for debate. My Mum doesn’t seem to think so, since she feels the depiction of Jane Austen being perhaps a bit forward with Tom Lefroy isn’t historically accurate. She also doesn’t think Jane Austen would have eloped with Tom. 😐

I’m not sure if Jane did elope with Tom Lefroy or with one of her suitors when she was young in life. I would need to be corrected on this point. But it’s fascinating how this 2007 film portrays that angle in Jane Austen as a person and how she eventually makes the decision to refuse him and return home.

An argument I’ve heard from a Rotten Tomatoes critic is that ‘the film focuses too much on wardrobe and not enough on Austen’s achievements’. There is truth in that, as we don’t get to see enough of Jane Austen working on ‘Pride and Prejudice’ and ‘Sense and Sensibility’ in her early life. 😦

There are a couple of scenes where we see Jane Austen working on ‘First Impressions’, the original title of ‘Pride and Prejudice’, and it’s argued her relationship with Tom Lefroy is what inspired her to write Elizabeth Bennett and Mr. Darcy as characters in ‘Pride and Prejudice’. Sadly, it’s not enough. 😦

Whilst the touches of Jane Austen’s writing are here and there, it’s not the central focus of the film. The focus is on Jane’s relationship with Tom Lefroy, and sometimes, it’s debatable whether the relationship is as sincere and as genuine as it should be in the film compared to what was in real life.

I get it’s meant to promote the film internationally, but you can already do that with just having James Cromwell in the film in the same way the 2005 ‘Pride & Prejudice’ film had Donald Sutherland in it. It would also save Anne Hathaway having to work on a convincing British accent when making the film.

James McAvoy plays Tom Lefroy in the film. This is more ‘Atonement’ James McAvoy as opposed to ‘The Chronicles of Narnia: The Lion, the Witch and the Wardrobe’ James McAvoy. And I guess a little bit of ‘Charles Xavier’ James McAvoy from the ‘X-Men’ films, especially with the butt-naked scene. 😮

I mean, I know Xavier drank a lot in ‘X-Men: First Class’, but that’s nothing compared to him going butt-naked in this film. 😀 Despite that, I enjoyed the interaction James McAvoy as Lefroy had with Anne Hathaway as Jane Austen and you could root for these two being together as a couple in the film.

Julie Walters plays Mrs. Austen, Jane’s mother. I’ve seen Julie Walters a number of times in films over the years, such as the ‘Mamma Mia’ films and the ‘Paddington’ films. You could almost say Julie Walters is playing the Mrs. Bennett part from ‘Pride and Prejudice’ when Mrs. Austen dotes on Jane.

James Cromwell stars as Reverend George Austen, Jane’s father. It was surreal to see James Cromwell in thid film, especially as he’s been in ‘Star Trek: TNG’ and ‘DS9’, ‘Star Trek: First Contact’, ‘Spider-Man 3’ and ‘The Artist’. James Cromwell probably had to work on his British accent here too.

Maggie Smith plays Lady Gresham in the film. This film was made before Maggie Smith became recognisable in ‘Downton Abbey’ in recent years. 😀 Lady Gresham as a character seems a lot like Lady Catherine de Bourgh from ‘Pride and Prejudice’. I doubt Lady Gresham was a real person Jane had met.

The film also features Lucy Cohu (who I’ve seen in the ‘Torchwood’ story ‘Children of Earth’) as Eliza, Cometesse de Feuillide, who was Jane Austen’s cousin and later sister-in-law, since she married one of Jane’s brothers – Joe Anderson as Henry Austen. It was interesting to see Lucy Cohu appear in this film.

There’s Laurence Fox (who was married to Billie Piper at one time) as Mr. Wisley, Lady Gresham’s nephew, who becomes one of Jane’s suitors in the film. There’s the late Ian Richardson as the Lord Chief Judge Langlois of London and Tom Lefroy’s uncle, who disapproves of Tom being with Miss Austen. 😦

Anna Maxwell-Martin plays Cassandra, Jane’s sister in the film. It was nice to see touches of the sisterly relationship between Jane and Cassandra in the film, though it was very sad when Cassandra lost her betrothed fiancée, Tom Vaughan-Lawlor as Robert Fowle, once he contracted Yellow Fever. 😦

There’s Leo Bill as John Warren, another potential suitor for Jane; Jessica Ashworth as Lucy Lefroy; and Helen McCrory as Mrs. Radcliffe, a gothic author whom Jane gets to meet in London. Incidentally, the works of Mrs. Radcliffe are mentioned in Jane Austen’s novel ‘Northanger Abbey’. 🙂

At the end of the film, there’s a nice scene where Jane, now a successful author 20 years later, reunites with Tom and she gets to meet her daughter who’s also called Jane. Miss Austen agrees to read aloud from one of her books to young Jane Lefroy, since she’s a very devoted fan of her work. 🙂 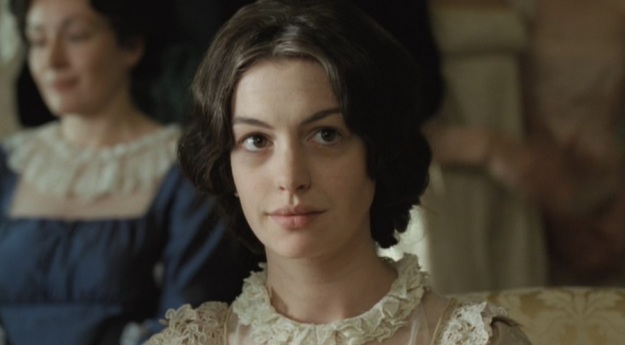 ‘Becoming Jane’ is arguably not the best representation of Jane Austen as a person in her younger life when she had a relationship with Tom Lefroy. With that said, I appreciate the efforts the film made in depicting Miss Austen’s early life and it’s very intriguing to check out the film again like this.

I’m glad I used this film as well as ‘Miss Austen Regrets’ to form my research in terms of understanding who Jane Austen was as a person when it came to writing my ‘Doctor Who’ story ‘The Austen Code’. It might not be the best representation of her, but it’s a pretty fascinating one indeed.

It should also be noted that this film is partly based on the 2003 book ‘Becoming Jane Austen’ by Jon Hunter Spence, 🙂