A Love Lost But Never Forgotten

My Mum saw the 1995 version of ‘Persuasion’ first before seeing the 2007 version.

The 1995 version of ‘Persuasion’ was first released on DVD back in 1999. That’s four years after it was shown on TV via BBC Two. The original DVD didn’t have many special features. It was a straight-forward transfer from video to DVD with biographies on the characters attached as a special feature.

‘Persuasion’ (1995) was released alongside other early BBC DVD releases including an early release of the ‘Doctor Who’ story ‘The Five Doctors’, ‘The Best of Monty Python’s Flying Circus, Vol. 1’; ‘Noddy In Toyland’; ‘The Black Adder’ and ‘The Planets’. Things have changed since DVDs first began.

Okay, I don’t think there’s much to say on the special features front for 1995’s ‘Persuasion’ repackaged on DVD. But it’s amazing to think back then that DVDs were still in their infancy in 1999 and that it’d take a while for them to really catch on before becoming popular until Blu-ray arrived. 🙂

‘Persuasion’ of course is based on the original novel by Jane Austen that was published in 1818 alongside ‘Northanger Abbey’. Both stories are partly set in Bath, which was a city Jane Austen lived in at a time in her later life. Her impressions of Bath are reflected in both stories but very differently.

‘Northanger Abbey’ reflects on a girl who has happier and pleasant experiences of Bath. ‘Persuasion’ is a story that focuses on a woman who isn’t keen on Bath. Jane Austen herself wasn’t keen on Bath when she was living with her family at the time during the 1880s. It was interesting to discover that.

What I enjoyed about this version of ‘Persuasion’ was that it mainly focuses on events from Anne Elliot’s point of view which I imagine is what the book did too. The 2007 version didn’t do that much as it featured scenes focused from both Anne Elliot and Captain Wentworth’s viewpoints throughout. 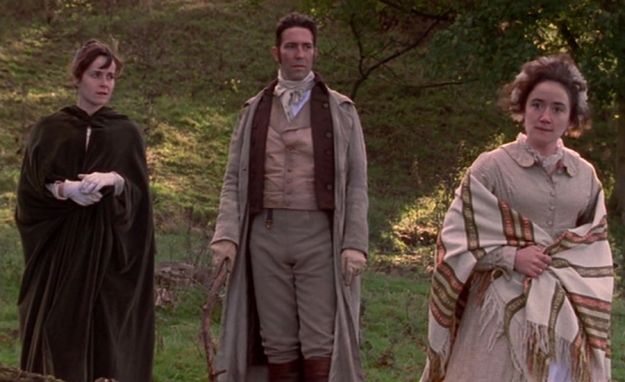 There is a relaxed atmosphere featured throughout this TV production, especially when Anne’s living with the Musgroves and when Captain Wentworth comes to visit them. It might not be to everybody’s tastes when they’re watching this as a tamer version of other Jane Austen adaptations.

But as I’m grown up and able to appreciate Jane Austen’s works due to my interest in the literary author via TV and film adaptations as well as writing a ‘Doctor Who’ fan-fiction ‘The Austen Code’, I found this worthwhile to watch. It certainly is faithful to the tone and atmosphere of Austen’s book.

It’s interesting how it’s pointed out that ‘Persuasion’ is more serious compared to other witty works by Miss Austen including ‘Sense and Sensibility’; ‘Pride and Prejudice’; ‘Mansfield Park’ and the aforementioned ‘Northanger Abbey’. That’s true especially as it’s presented in this 1995 production.

The 1995 ‘Persuasion’ feels like a watered down version of the story compared to the 2007 one. There are elements of humour featured in the story especially in the some of the snobbish characters. But I liked how the tone is taken seriously in Anne and Captain Wentworth’s relationship.

That’s ‘The Girl Who Never Was’ with Paul McGann. I like how Amanda plays Anne’s sweet nature and elegance of mind. She gets overlooked in society, especially when she could’ve had a happy future with Captain Wentworth seven years ago. Her sadness comes across when watching her in this story. 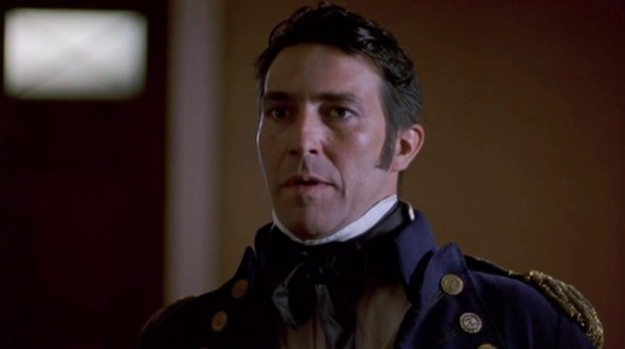 Ciarán Hinds is equally excellent as Captain Wentworth. I’ve seen Ciarán Hinds in the 2006 film ‘The Nativity Story’ playing King Herod and he played the villain in the 2017 film ‘Justice League’. I enjoyed how Ciarán plays the hero character of this story compared to usually seeing him as villains.

Initially, Wentworth ignores Anne’s presence when reunited with her in the company of friends. I liked it though when Wentworth shows concern Anne’s well-being when doing a long walk. He whispers in Lady Croft’s ear to encourage Anne to ride with her and Admiral Croft by horse and cart.

The scene where Anne and Wentworth really communicate with each other is after Louisa injures herself by doing a stupid jump from some stone steps. Anne takes charge in attending Louisa and Wentworth responds well as he helps out, noticing the firmness in Anne’s charge-taking right there.

It’s from there Anne and Wentworth become closer and intimate. Anne is eager in seeing Wentworth in Bath. Even when he’s on the verge of leaving a concert through a misunderstanding; it’s clearly shown she wants him to stay. It was nice to watch that development of their relationship.

Corin Redgrave stars as Sir Walter Elliot, Anne’s father in the 1995 production. I did find this version of Sir Walter silly and more snobbish compared to Anthony Head’s version in the 2007 TV film. It was entertaining to watch and made it equally frustrating when Sir Walter was sillier, focusing on status.

Susan Fleetwood stars as Lady Russell, who is a friend of the Elliot family in the story. I don’t know what it is, but to me Susan Fleetwood’s version of Lady Russell is colder compared to Alice Krige’s in the 2007 version. This is even in advising Anne’s on her decision to turn down Wentworth years ago.

Phoebe Nicholls stars as Elizabeth Elliot, the eldest of Sir Walter Elliot’s daughters and Anne’s sisters. Like her father, she’s every bit as snobbish. It was interesting to discover that she was unmarried despite how confident she was. It was also interesting that she seemed rather jealous of Anne in this.

Samuel West stars as Mr. Elliot, who seems to take an interest in Anne in the story. I’ve seen Samuel West before in the BBC version of ‘The Chronicles of Narnia: The Voyage of the Dawn Treader’. I’ve seen him in the ‘Doctor Who’ story ‘Dimensions In Time’ and heard him in ‘Serpent In The Silver Mask’.

There’s also Simon Russell Beale as Charles Musgrove and Sophie Thompson as his wife Mary Musgrove, who is Anne’s sister. The Musgroves live in Uppercross when Anne comes to visit them. Mary is a hypochondriac and pretty foolish whilst Charles is a very likeable and an easy-going person. 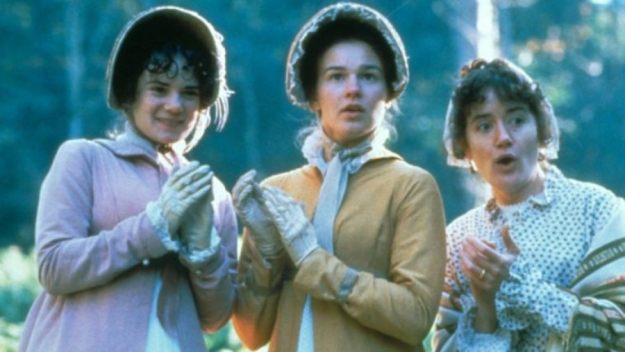 The 1995 production also features Emma Roberts as Louisa Musgrove and a very young Victoria Hamilton as Henrietta Musgrove. They’re both sisters of Charles Musgrove. Both are friendly and confident young girls who are easily attracted to Captain Wentworth when he comes to Uppercross.

There’s John Woodvine (who I’ve seen in the ‘Doctor Who’ story ‘The Armageddon Factor’) as Admiral Croft and Fiona Shaw as his wife Mrs. Croft. There’s Judy Cornwall (from ‘Keeping Up Appearances’) as Mrs. Musgrove and Roger Hammond (also from ‘Doctor Who’) as Mr. Musgrove. 🙂

I also recognised Robert Glenister (who I’ve seen in ‘Sink or Swim’ with Peter Davison and the ‘Doctor Who’ story ‘The Caves of Androzani’) as Captain Harville and there’s Richard McCabe as Captain Benwick. There’s also Helen Schlesinger as Mrs. Smith and David Collings as Mr. Shepherd. 🙂

Now in the 2007 version, there was that long drawn-out kiss between the two lovers Anne and Wentworth. Thankfully that doesn’t happen here in the 1995 version. It isn’t awkward and whilst it’s not passionate enough as you would expect it to be, it’s not very comical and can be taken seriously.

But the absence of a comical long drawn-out kiss gets made up for by Judy Cornwall’s over-the-top scream upon hearing the news that young Louisa Musgrove’s had an accident. Seriously, I was like, WHERE DID THAT COME FROM?! I couldn’t help laugh seeing it. And it woke Dad up from his sleep! 😀 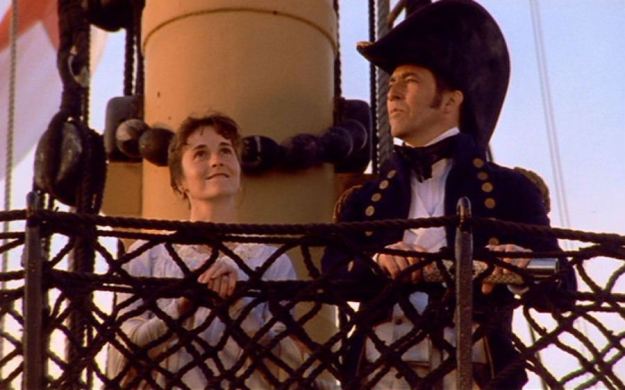 It was interesting to see how this version of ‘Persuasion’ ended. After Anne and Wentworth are married, they’re on board a ship together. Hmm! I suppose that’s what happens when naval officers marry women of society. Surprised the 2007 version didn’t go in that direction either with its ending.

Like I said, there aren’t many special features on the original 1999 DVD release apart from the biographies on the characters featured in the story. There is the DVD booklet to accompany it, with notes on the ‘Persuasion’ story and Jane Austen, but not much behind-the-scenes information sadly. 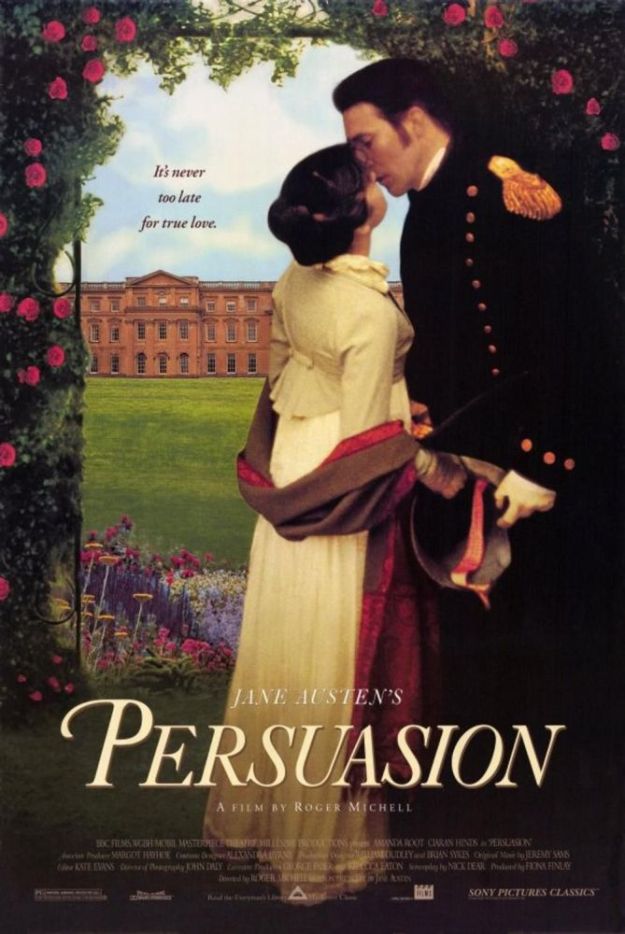 The 1999 version of ‘Persuasion’ is very good. I enjoyed it when I saw it on DVD recently. My Mum likes this version very much and I enjoyed the performances of Amanda Root and Ciarán Hinds. It is tamer than the 2007 version, but it did feel like a faithful version of Jane Austen’s original novel.